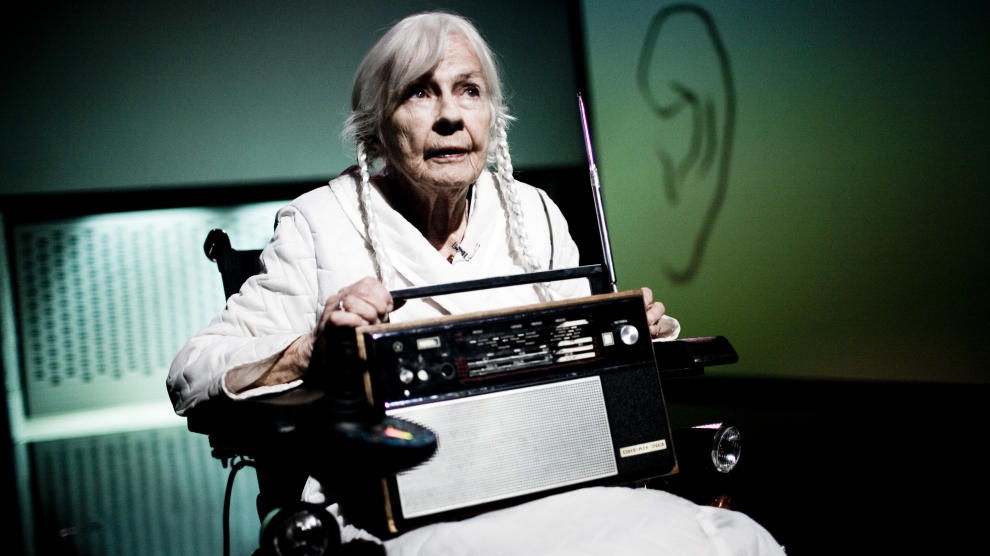 “Who will feel like watching an old grandma on the screen for one and a half hours?” said Danuta Szaflarska when she was offered the leading role in Dorota Kędzierzawska’s Time To Die. She was 92 at the time. Last February, the actress celebrated her 100th birthday!

The film turned out to be an enormous success and Szaflarska’s role is said to be one of the best appearances in her career which started on September 14, 1939 in the “Pohulanka” Vilnius Theatre and had the first highlight Forbidden Songs (the first Polish feature film made after WWII). Both critics and the audience claim her beautiful, good and joyful face makes everyone sympathise with her.

Born in a small village of Kosarzyska in the Polish mountains close to the city of Kraków, Szaflarska decided to move to Warsaw after her debut and two years spent in Vilnius, when she was 26 (1941).

“When I arrived in Warsaw the first time, I got of the train, I looked at Jerozolimskie Avenues and I said to my companion: ‘This is the city of my life!’ I have never been fallen in love at first sight with a man, only with Warsaw.”

That love made Szaflarska take part in the Warsaw Uprising, which had an enormous influence on the actress’s later life. Throughout 97 minutes of Dorota Kedzierzawska’s documentary, Another world (the film’s length is a direct reference to the actresses age at the time), Szaflarska talks a lot about her time in Warsaw, about the Uprising, about history and culture, about the world which created her and disappeared in “a tsunami whirlpool of history.” “Another world” is a place of huge tragedies, small emotions and an inexhaustible source of stories.

In the documentary, Szaflarska never loses her grip. Whether she talks about the war or deaths in the family, her voice sounds strong and confident. “Nothing’s easy” — the words of her close friend, Father Jerzy Popiełuszko (murdered by the communists in 1984), become her motto. Life is hard, people betray one another and a success comes only after a dozen of failures. The person’s value can be measured by how they deal with hardships. Only stubbornness, consistence and hard work can lead to fulfilment.

Asked in an interview if her experience and more than seven decades on stage help her now, she said: “I don’t even think about it. Today I work in an entirely different theatre, in a different world. I was delighted to her a compliment from Grzegorz Jarzyna that I am a modern actress.”

In No matter how hard we tried, Dorota Masłowska’s play directed by Grzegorz Jarzyna in the TR Theatre in Warsaw, Szaflarska plays the role of a depressed old woman in a wheelchair.

“The first scene has always been the very first scene which I start by saying: ‘I remember that day when the war broke out.” which is a reference to the character’s memories,“ sais Szaflarska in an interview. “We rehearsed that scene the entire day and then we decided to stop. I come back the next day and Grzegorz [Jarzyna] begins with my scene again but he asks me to perform in an entire-ly different way. I have started started the same scene many times now and I have built the charac-ter several times too. We have performed No matter how hard we tried so many times and I still have butterflies in my stomach when I say that single sentence. This exercise that Grzegorz gives at work gets each actor to create things on the spot, be ready for a constant change. Thanks to that each actor keeps developing their skills. It is truly vital for young actors but that makes me learn too,” she adds.

At 100, Szaflarska says she remains very positive and is not afraid to die. She is afraid of illnesses and how that transcendence to the afterlife will look like but she confides in Father Jerzy Popiełuszko, who will help her through.

“First of all, you mustn’t give in to alcoholism or drugs,” said Szaflarska in an interview. “Back in 1939, when I worked in the “Pohulanka” Vilnius Theatre, I found out that my brother had died. On that very day I played in a comedy — it was an enormous effort for my body. Earlier, when I was ten, my beloved father passed away, which was a tough experience for me. You carry such trage-dies till the end of your life. Even today I can bust out crying at the thought of my brother. But we cannot reflect on tragedies. “Nothing’s easy” as Father Jerzy would say. And it’s important to re-peat these words very often.”

“There was a time when I was always in a hurry. For example, I was on the tram and I wanted the tram to go faster. I was that hurry inside me. And suddenly I thought: ‘Wait a moment! Where am I running? There is a coffin waiting for me, in the end!’ So het rid of that internal need to run. Look at the world, observe what is happening around you. We only have one life and there is so much beauty in everything. The fact that we are alive is something miraculous and wonderful.”

Excerpts from interviews by Anna Sosnowska and Michał Smolis.
The photograph from the TR Theatre collection by Kuba Dąbrowski