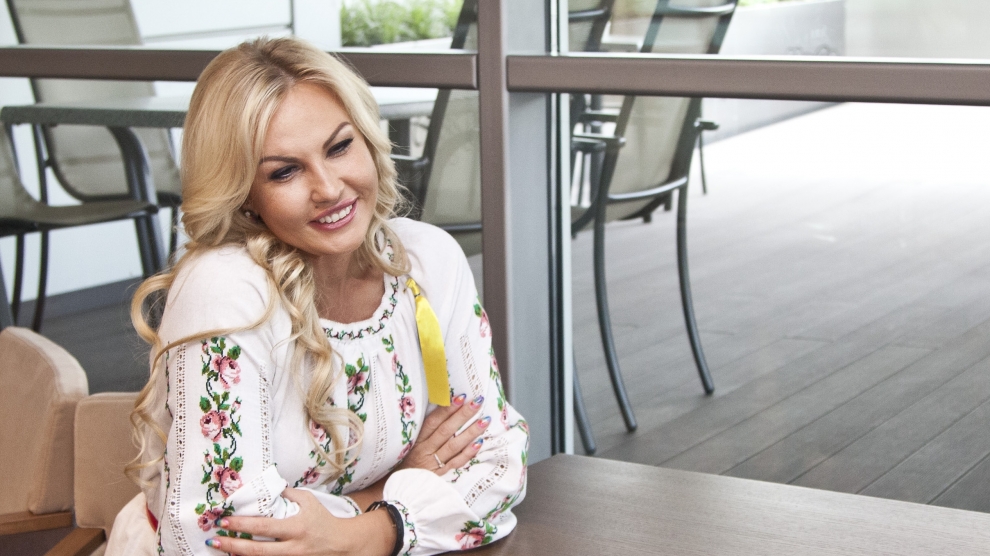 The Ukrainian popstar is much more than the most well-known character from the record-breaking Fox TV series Meet The Russians. She is also an accomplished singer, a patriot and a social activist. Now, six months after the broadcast of the series’ last episode in the UK, it is time to get to know Kamaliya’s other side.

In the series, we meet Kamaliya and her billionaire husband, Mohammad Zahoor, in their Kyiv mansion, just before leaving for London for a few months. Already famous in Ukraine and Russia, Kamaliya sees the UK as the perfect spot to launch her international music career.

Together with her husband, Kamaliya gives us a tour of their Kyiv home. She then starts listing all her beloved pets: five little dogs, four big ones, three cats, three parrots, a cockatoo, a rabbit, a chinchilla, two little sharks and five horses. With pride, she shows the gold rifle encrusted with diamonds – a gift from her husband on St Valentine’s Day, and explains how she keeps her skin glowing by bathing in forty bottles of champagne.

No wonder her husband only has eyes for Kamaliya, whom he met in 2003. Zahoor, a British citizen of Pakistani origin who’d worked in the steel industry since the early 70’s, first heard his future wife during a business meeting, at which she sang Ukrainian folk songs. At that moment, Sarah Brightman, who until then had the most beautiful voice in the world in Zahoor’s opinion, immediately lost her throne. Fast-forward five years, and the former Miss South Ukraine is Miss World and Mohammad Zahoor has sold his business to dedicate himself to his wife’s career.

Meet The Russians didn’t give much visibility to Kamaliya’s career and music, as it rather focused on her extravagant shopping habits, as well as parties organised by herself and Zahoor along with their ambitions to be part of the British upper class. Her impressive voice — after all, few pop singers can boast a five-octave vocal range — had to take the backseat.

Born Natalya Shmarenkova, Kamaliya started her singing career at the tender age of three in a children’s choir in Budapest. “Since I was a child I wanted to perform, sing, go to festivals. However, to be able to afford proper production for my music I needed money and my dad, who worked in the military, did not earn much.”-she recalls.

However, Kamaliya knew what she wanted. Now, looking back, she cites a Russian proverb, which says that when you have a goal, you don’t see obstacles. “I had an idea. I loved a group called Space and I was able to write my own songs and lyrics. Thus, I would use their melodies, write and add my own lyrics and perform the songs.”

She points out that, in the beginning, opera wasn’t the music style she wanted to work with, but teachers felt that her voice would fit it perfectly. When she tried it, she fell in love with the style and started to incorporate it into her own songs.

“It was a mix of opera singing and pop music. I went on to get first place in different competitions and won the Grand Prix. After that I tried different things. At some point I met Jörn-Uwe Fahrenkrog-Petersen, a famous German composer, musician and producer, who fulfilled my vision of merging classical and dance music and, as a result, a unique album was created.” – she says.

Out of her five albums, it is indeed Club Opera, featuring elements from Madame Butterfly and Swan Lake, which Kamaliya feels the proudest of. So far she has released four singles from it. The Roman-inspired music video for ‘I’m Alive’, shot in Bulgaria, has over 45 million views on YouTube, whereas ‘Butterflies’ has almost 40 million. The latter reached number 1 in the UK Music Week’s Club Chart and ‘I’m Alive’ has topped YouTube charts in Germany, Spain and Poland. Her latest single, ‘Never Wanna Hurt You’, propelled by a remix by DJ Fedde Le Grand, found its way to the top of the UK Urban Chart.

“I am currently working on a new album, which will be quite surprising.” – says the singer. “This time around I will present a new concept. In a way, it is also a merging of different styles, which I believe will please my fans. After that I plan to come back to my mix of classical and pop music.”

“In case her next album featured elements of opera, people could think that it is the only thing Kamaliya can do and we don’t want to create any stereotypes around her music.” — adds Zahoor.

Kamaliya enjoys a good level of popularity amongst Poles. She says that it’s not only the music that connects her with the country. “I believe there is something more to it. My great-grandmother was Polish. She was called Halicka. Therefore, it must be that mutual likeness, which translates into an energetic, rich exchange. It’s an instinctive connection.” – she says proudly.

The artist is also proud of her husband, the owner of The Kyiv Post, whose staff was awarded the prestigious Missouri Honor Medal from the University of Missouri’s School of Journalism this week, along with seven other publications, such as The New York Times, The Washington Post and The Wall Street Journal.

In November and December last year, Kamaliya was deeply engaged in supporting the Maidan demonstrators, who demanded integration with the EU and better relations with the West. “I don’t belong to any parties and I have no political ambitions. I love my country and I don’t want any violence.” -she wrote on Facebook in December. She brought food to Maidan and visited wounded students and journalists. She says she simply couldn’t focus on her music as she knew she was needed elsewhere.

Kamaliya didn’t refrain from criticising president Yanukovych and Vladimir Putin, his supporter. “I don’t mean to scare anyone, but Putin is in power for way too long and he sees himself as a tsar, a god. He decides who should live and who should die.” In her opinion, after taking Crimea, Putin will want to make advances in western Ukraine, maybe even towards Kiev, which – as Russians say – is the mother of all Russian cities.

“My father worked for the Soviet military, so I have been able to experience both sides. You could compare Russia to an ex-husband, who is still jealous. It separated from Ukraine, but still doesn’t want to let her go.” — says Kamaliya.

Not only those fighting for Ukraine’s freedom can count on the singer’s support. The rights of social and sexual minorities are also causes close to her heart, as seen on the rainbow-painted nails she has sported. Kamaliya often speaks up for gay rights in Ukraine, where homosexuals are often seen as second-rate citizens. “I have many gay fans around the world.” -she stresses.

Although it could have a negative impact in her career in Russia, the singer says she will keep speaking her mind. “There are already enough hardships in life, so there is no reason to make people’s lives even more difficult, especially when they love each other.” — says Kamaliya.

Apart from little extravagances here and there, one would be hard pressed to define her as a spoiled star. That approach to life and people might have been strengthened when she became the mother to Arabella and Mirabella. Having been seriously sick after the Chernobyl nuclear accident, the singer had been trying to get pregnant for years and gave birth to her twin girls last September.

After the enormous success of Meet The Russians, the producers are preparing a new reality show, Meet The Zahoors, which should premier at the end of the year. This time, they are not sharing the screen with other Russians living in the British capital. The main focus, as in the previous series, will be on the daily adventures of the Ukrainian billionaire couple, not on Kamaliya’s music career.