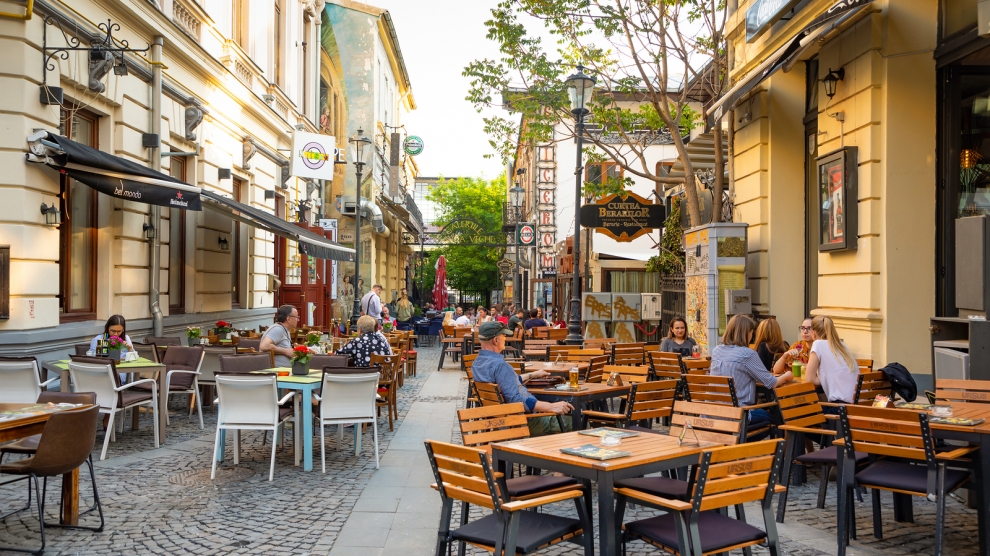 Hi, can I order a vegan meal for my flight to Bucharest please?

At the other end of the line, an agent at Tarom – Romania’s national airline – replies in Romanian. I had noticed that Tarom is one of few airlines which still serves dinner on its flights and I wanted to make sure a vegan option was possible.

The agent switches to English. Could you speak slowly and clearly?

I repeat my question, slowly this time, and the agent asks me if I want vegetables. I say that would be fine. I remain gobsmacked that the airline still serves food: British Airways stopped quite some time ago.

We have been airborne for about half an hour and a flight attendant comes up to me and makes sure I ordered a vegan meal. I confirm that I did, and I get ratatouille, rice and broccoli with a fruit salad. Oh, and a piece of paper with a list of ingredients to make sure it’s all legit.

Romania is an Orthodox country and as such has a tradition of fasting for Lent (and at other times during the year, notably in the run-up to Christmas) so a lot of restaurants offer vegetarian or vegan versions of dishes that normally would contain meat. It’s not a fasting period now but I am still able to find a few vegan places. Having arrived at my hotel quite late I am still able to walk to Bucharest’s Old Town and have a great mushroom curry and a glass of red wine.

Having had a shorter than usual night of sleep (Bucharest is two hours ahead of London) I come down to the hotel restaurant to have some bread, vegetables and fruit. In my experience few hotels — even five star places — are ready to accommodate vegan travellers. So I am prepared for whatever I might be lucky enough to get.

I enter the hotel restaurant and two gentlemen welcome me at the door. I give them my room number but it appears that they are expecting me: I am the only person in the entire restaurant. Am I the only guest in the entire hotel? (I remember that a review of the restaurant in a well-known local city guide once compared dining here to solitary confinement).

The younger of the two waiters approaches me, hands me a menu and asks me to order a la carte. It seems there are indeed very few people staying at the hotel.

Omelette, eggs, sausage? The waiter asks. That is gonna be tough, I think to myself. The menu is not really helpful. I am unable to spot anything that would be vegan.

Can I just have some vegetables? Tomatoes, cucumbers?

Mushroom, can be? the waiter asks. Yes, but no butter, just oil, please. Yes, of course! The waiter confirms it’s possible and disappears for 10 minutes.

In the meantime, his older colleague — a grey-haired gentleman in his early sixties — brings me a black Americano with milk (fortunately!) on the side. His younger colleague joins him with a plate full of juicy tomatoes, peeled cucumbers and sliced peppers. He also brings a small bowl of what looks like a kind of paste. I ask what it is.

Zacusca, he says. I am still not convinced. Vegan, past, tomat, he says. I google it when he is gone and it turns out that this a traditional Romanian chutney made of eggplant, tomatoes and red peppers, 100 per cent vegan. I am relieved.

I have just started having my breakfast and another guest arrives. I am relieved again: I am not alone. I am not sure the waiters are so happy: another vegan.

It seems she is not impressed with their dairy or meat inclusive suggestions. She is clearly horrified when she is offered pork for breakfast. She opts for a fruit salad and a plate of vegetables. Oh, you have the awesome eggplant paste. I want that too, she says when she spots my food. She then says that while she is indeed normally vegan she has decided to have some goat cheese this morning.

A smile appears on the faces of both waiters, their faith in humanity restored.