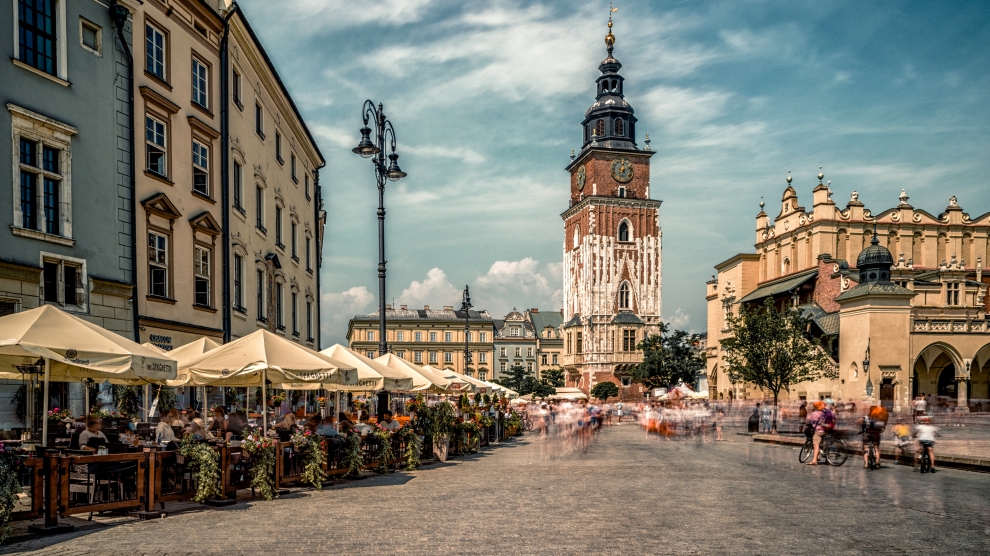 The first time I visited Kraków was a couple of years ago when I was on the way to Belarus as part of a youth exchange programme. We only had a brief stop, no more than a few hours, so I only had time to look around the city centre. It was enough to realise how beautiful the city is, so I promised myself to go back whenever I got the opportunity: last weekend I finally got the chance. I spent a week in Poland’s second largest city as part of a summer school for young professionals from across Central and Eastern Europe. Most of my time went to attending courses, but luckily I also had time to look around this magnificent place.

Kraków gives the impression of being a smaller city than it is. Although my hotel was located in the city’s outskirts, it only took around 20 minutes by bus to get into the centre. That’s quite a feat for a city of close to 800,000 people.

Frankly, I did not know much about Kraków, so I started exploring where all tourists do – the Main Market Square, which I think it is fair to call the city’s best-known attraction. It’s the largest medieval-style central urban space in the whole of Europe, surrounded by many iconic buildings: the Gothic St Mary’s Basilica, the Church of St Adalbert, the Sukiennice Cloth Hall (in the latter you can find the Museum Gallery of 19th Century Polish Art). It is the perfect place to admire the architecture of medieval Poland, albeit these days with added restaurants and bars. Luckily, the crowds I had been warned about where not as large as I expected, even though I visited during the peak tourist season.

After less than fifteen minutes of wandering in the historic Old Town, a UNESCO World Heritage Site, the next must-see of the city I visited was, of course, Wawel Castle. Located on the bank of the Vistula river, the residence of Polish kings is an impressive medieval complex with an insight into the life of Polish royals, as well as a great collection of different paintings and sculptures, not to mention the famous Wawel dragon.

Although Poland is known for being a strongly Catholic country, with the Kraków region being one of the most fervently religious, the city’s rich history and cultural life offers a great experience of Jewish culture too. The Kazimierz district is Krakow’s de facto Jewish quarter packed with tight-fitting cafés, synagogues, shops, bookstores, bars and artistic spaces. Nowy Square in Kazimierz is a perfect place to taste zapiekanka, a local specialty of the city.

For those interested in the city’s cultural side, the Stained Glass Museum (a museum of colourful glass artworks associated with Krakow) and Schindler’s Factory (the story venue of the famous Jew-saving Oskar Schindler’s activities that introduces the Nazi occupation of Poland) are also very much worth visiting.

Nightlife in Kraków is fabulous. Make sure you visit the Dolnych Mlynow, which has a great variety of pubs and bars. If you are a fan of craft beer, or beer in general, this is the place.

One minor complaint would be that Kraków has little public transportation after 10 pm. Fortunately, both Uber and Bolt, as well as other car-sharing services are available day and night.

You still have half of the summer. Go visit Kraków.