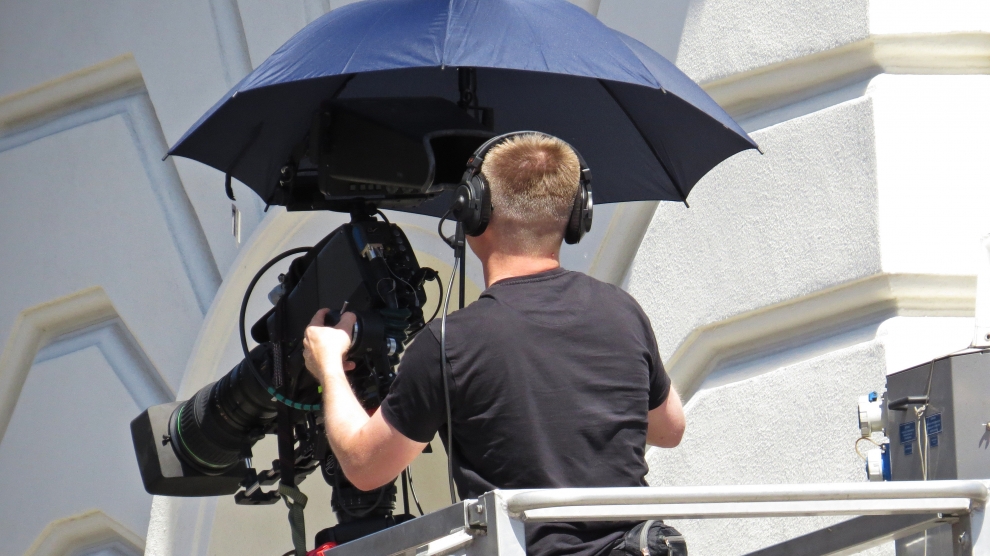 Be a movie set on Mars or on the island of Manhattan, there is no better place than central and eastern Europe to start shooting. Thanks to financial incentives, qualified people and wonderful landscapes, the CEE region is rapidly turning into a European Hollywood.

“The filming here was amazing. We couldn’t find a place like the Prague waterfront – which we’re using as a stand-in for part of Oslo – anywhere,” said Norwegian producer Espen Horn, commenting the upcoming Norwegian-Swedish-Czech co-production Amundsen.

“We had a choice of several locations, including Hungary or Lithuania, basically under very similar conditions. But we chose Prague, and we are very happy we did,” he added.

One of the main reasons to shoot a movie in eastern Europe are the cheap costs involved, as well as tax incentives, which act as huge accelerators for foreign productions.

“The Lithuanian Film Tax Incentive came into effect in January 2014 as a new policy measure to foster local and foreign film production in the country,” Dovilė Butnoriūtė, head of the Department of Film Promotion, Information and Heritage at the Lithuanian Film Centre, tells Emerging Europe.

“It offers an opportunity to save up to 20 per cent of the film production budget through a private investment scheme. Since its introduction there has been a rapid growth in the number of foreign film productions.”

“The strength and growth of the Hungarian film industry relies on multiple factors, each of which strengthen each other and together create a business environment and culture, which today are ideal for international filmmaking”, explains Daniel Kresmery, head of production and development at Korda Studios, the second biggest studios in Europe after London.

“First and foremost, Hungary has a long history and tradition of filmmaking, dating back to the late 1800s. Secondly, Hungary has a reputable and trusted (i.e. “bankable”) Film Rebate system, which is one of the strongest in Europe. Thirdly, there are multiple experienced, hardworking crews with top-level international filmmaking experience. And last, but not least, the infrastructure is here – for example a world-class Film Studio like Korda Studios,” he tells Emerging Europe.

“Hungary was put on the filmmaking map for cost-saving reasons, and still to this day remains competitive (although there are much cheaper options further East), but it is a combination of all of the above, which in turn allow for first-rate films to be produced in Hungary, that makes Hungary such an attractive filmmaking hub.”

Georgia is also a unique location due to its strategic position between Europe and Asia. And the different climate zones make the country an attractive destination for the film industry. The country also has a unique architecture which has been influenced by both eastern and western cultures but also retains its own distinct features. There are ancient buildings and constructions built as far back as the 3rd or 4th century BC: they include fortresses, shrines, houses, cave cities and churches.

“In one day it is possible to shoot in snowy mountains, the desert or the seaside,” David Vashadze, Film Commissioner at the Georgian National Film Centre tells Emerging Europe.

“But we understood that merely being home to unique locations is not enough, and we decided to bring a financial incentive, which many countries are using to attract foreign productions. At the moment, Georgia really has the most financially useful and at the same time easy accessible cursory bank system.”

Georgia in fact offers a 20 per cent cash rebate on qualified expenses incurred in the country. An additional rebate of up to five per cent is available if a production promotes Georgia as a destination.

Although central and eastern Europe is has only recently begun to emerge on the international film-making scene, many countries have a long and important tradition of film-making. In many places however, propaganda trumped art.

Film-making in Lithuania dates back to 1897, but it took almost half a century to become the form of entertainment it is today, and it was only really in the 1960s that a true Lithuanian cinema was born. Students and young generations started to shoot films in order to tell the truth about post-war life. According to Linas Vildziunas, a film critic and president of the Lithuanian Chamber of Film Critic, in the 1960s the typical characteristics of Lithuanian cinema emerged: slow and thoughtful narrative, poetic metaphors and evocative plasticity of monochrome.
In 2018 Georgia celebrates 110 years of film making: the first production appeared in 1908.

“In the early 1920s, many directors were producing anti-Soviet films, the reason that some of them didn’t have the chance to make another movie. After the collapse of the Soviet Union, there were of course economic problems that also affected the film business so there were not many productions during the 1990s,” says Mr Vashadze.

“After 2001 we changed our financing system. Before then it was the government funding movies. Now trends and markets are different and most of the films are shot together with European productions and European funding. It is always hard to shoot mainstream blockbusters in Georgia, because it is a small country, but some Georgian movies have been distributed abroad, such as Tangerines, which was distributed in 25 countries, or My Happy Family, acquired by Netflix,” he adds.

Hungary won an Oscar in 2015 for best foreign language film, Son of Saul, which follows a day-and-a-half in the life of Saul Ausländer, a Hungarian member of the Sonderkommando at Auschwitz during World War II.

And in only three years, Budapest has attracted more and more US directors. To quote only the latest examples: Red Sparrow, the spy thriller with Jennifer Lawrence takes place in Budapest; Blade Runner 2049, sequel of the 1982 movie and directed by Ridley Scott, starring Ryan Gosling and Harrison Ford was filmed at the Korda Studios; the Tura castle, only 30 minutes away from the Hungarian capital is the set of the fantasy movie Fallen.

“A lot of historical and fantasy movies come to Hungary, partly because of the locations (Budapest is very beautiful, versatile, and film-friendly), and partly because of the set construction. Hungarian set construction is top-notch, and most of the big productions that choose Hungary have large set builds. Recently, Sci-Fi movies have also begun to prefer Hungary, for the same reason,” Mr Keresmery adds.

“Budapest is amazing because it can double for various cities. It has been shot as Paris, Berlin, Munich, New York, Buenos Aires and Vienna – to name just a few. We recently just coproduced a 13 episode season for a North American television series, shot almost entirely in Budapest. Each episode takes place in a different city or region, including Boston, Montreal, Toronto, Vienna, Berlin and Paris Each of these we managed to recreate in Budapest.”

On the other hand, Lithuania recreated Russia during the Napoleon’s military campaign in the 2016 BBC series War and Peace. It also pretended to be Belarus during the Nazi occupation in the war movie The Defiance.

“Being in Lithuania has restored my faith in film making”, commented The Defiance producer Pieter Jan Brugge.

Orlando Bloom is the latest actor who travelled to eastern Europe to shoot a movie. The series Carnival Row from the American companies Amazon Studios and Legendary Television about a detective suspected of murder was among the most costly productions ever filmed in the Czech Republic.

American producer Gideon Amir has nothing but praise for the Czech team: “The Czech Republic has a fantastic film base. As for artistic craftmanship, there is no assignment that Czech filmmakers cannot manage. For anything – literally whatever you want from them – they always have an ingenious solution.”