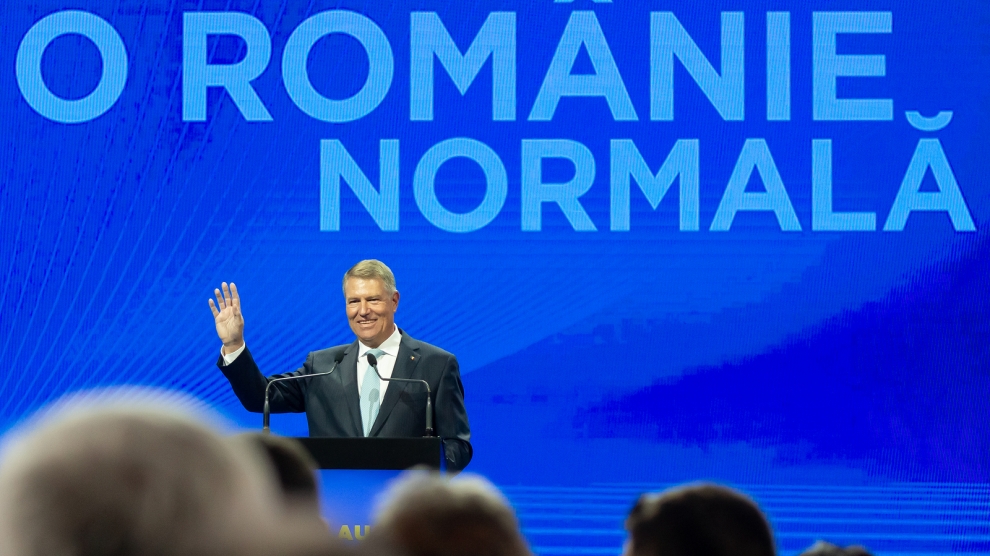 Romania has – in appearance at least - lacked a powerful far-right movement for almost two decades. But as Roland Clark, an expert on Romanian fascism, tells Craig Turp, that's because right-wing ideas in the country have to a large extent gone mainstream.

Romania’s presidential election, the first round of which will be held in November, is likely to see renewed attacks on the ethnicity and faith of the country’s current president, Klaus Iohannis.

An ethnic German from Transylvania, Mr Iohannis (pictured above) is also a Lutheran in what is an overwhelmingly Orthodox country.

In early August, an umbrella group calling itself Alternativa Dreaptă (Alternative Right) announced its backing for the deeply conservative Mihail Neamțu, openly calling for its supporters to elect a ‘Christian’ president. The insinuation of course was that Mr Iohannis is not a Christian, despite worshipping at the Lutheran church in his home city of Sibiu most Sundays. Mr Neamțu himself later questioned the Christian credentials of another candidate, the Save Romania Union’s Dan Barna, who supports same-sex marriage.

Much to the chagrin of Alternativa Dreaptă however, Mr Neamțu has since decided not to run for president, probably realising that he had little chance of being elected. He has instead publicly backed another candidate, Theodor Paleoglu, a less firebrand conservative.

For some, to be Romanian is to be Orthodox

Mr Neamțu’s absence from the ballot paper however does not reduce the impact of a political grouping claiming that Romania needs a ‘Christian’ president when it already has one, and demonstrates that for some people in the country, the fact that Mr Iohannis is not Orthodox is a serious problem. One deeply conservative and highly controversial commentator, Iulian Capsali, went so far as to suggest that anyone who voted for either Mr Iohannis or Mr Barna could not possibly be a Christian. “Such a vote would be an affront to the Holy Spirit,” he said.

Other candidates – particularly the prime minister, Viorica Dăncilă, a member of the ruling Social Democrats (PSD) – would have taken note. We should expect both Mr Iohannis and Mr Barna to be portrayed as outsiders in an attempt to appeal to those voters for whom to be Romanian is to be Orthodox.

The idea is not new.

It forms the basis in fact of what has been called ethno-nationalism, which was one of the core doctrines of the fascist Romanian legionary movement which was highly influential in the late 1930s and briefly ran the country in 1940. Indeed, Dăncilă launched her presidential campaign on Assumption Day, August 15, with a highly-publicised visit to Putna Monastery in the far north of the country, where she called on Romanians to pray in order to “end division.”

It is in part because of this adoption of ethno-nationalism by mainstream politicians that Romania has yet to see a far-right party emerge from the ashes of the overtly neo-legionary Greater Romania Party, which last sent MPs to parliament in 2004.

But according to Roland Clark, author of perhaps the definitive book about the legion, Holy Legionary Youth, the dangers are the same.

“Romania does not need a neo-legionary movement. The mainstream political parties are promoting ethno-nationalism to the hilt,” he says.

Clark believes that ethno-nationalism will persist in Romania until the country’s Orthodox church – which revived the memory of the legion as a spiritual inspiration to fight communism – takes a stand.

Clark’s interest in the Romanian legionary movement began when he was an undergraduate at the University of Sydney in his native Australia.

“I was studying a module on fascism and one of the lecturers briefly mentioned clerical fascists, but said no more. So I did a little research on it and discovered that they had been in Romania. The idea of priests with guns appealed to the 20-year-old me,” he says.

Clark spent 18 months in Romania learning the language before heading to Pittsburgh to complete a masters and PhD. It was the PhD which, with much revamping, became Holy Legionary Youth.

“The Romanian edition came out about a month after the English, and sold out fast. It took the English version a lot longer to sell,” Clark admits. “I think it’s relatively easy to sell books about the legion in Romania, not least as the book was published at a time when there was a public debate going on as to whether or not the legion was fascist, with plenty of politicians claiming that it wasn’t, it was just a national movement.”

The argument is important as it has deep implications throughout the European Union, where the law forbids the use and display of fascist symbols.

“To define the legion in court as a non-fascist movement would mean that you could reuse all of its symbols,” Clark explains. “So when the book came out there was a lot of positive feedback from people who said, ‘look, here is a useful contribution to this debate, as Clark proves convincingly that it the legion was fascist, and was violent.'”

The emphasis that Clark places on the legion’s violent day-to-day activities is what makes the book stand out amongst others written about the movement, which focus primarily on the legion’s rhetoric, ideology and religion. “It is only when you look at what the legion did day-to-day that you realise just how deeply violence permeated the movement,” he says.

There is one passage from Clark’s book, describing the Bucharest pogrom of January 1941, which particularly brings home the violence – and youthfulness – of the movement:

“Legionaries began arresting Jews on 20 January, and the following afternoon gangs of legionaries invaded Bucharest’s two largest Jewish neighbourhoods. They loaded roughly two thousand Jews – including children and the elderly – onto trucks and transported them to prearranged sites where they beat, raped and tortured them. Of the legionaries involved in torturing Jews at the police station on Matei Basarab Street, most were aged between 15 and 25 years old.”

Clark dismisses claims that the legionaries merely used religion to soften their public image, and says that many were very religious. But while there were priests within their ranks, not all were taken in.

“Quite a few priests hated the legion as they saw it as violent, anti-Semitic and simply not Christian,” he says.

While Clark admits that it might just have been possible to be a ‘good’ legionary, he caveats his statement by saying that such members would have to have been “naïve and cut off from the everyday reality of the movement.”

“I do not see how you could be a committed member, particularly at leadership level, and not see what was going on,” he says. “You would really have to close your eyes to a lot of what was happening to still see the legion as a good thing.”

Not just a poet

One name which often gets mentioned by Romanian nationalists in the sense of ‘good legionary’ is the poet Radu Gyr, who wrote the movement’s anthem and would later spend 20 years in Romania’s communist prisons.

“He was not just a poet,” says Clark firmly. “He was involved in pretty much everything and knew what he was doing.”

“I am a free man and want to remain that way,” Neamțu responded at the time to accusations of anti-Semitism. “I do not want to see the publication of a new Index Librorum Prohibitorum.”

Neamțu however, for all his faults, is neither a neo-legionary nor the vanguard of a legionary revival. The legion of the 1930s was youthful, and Romania’s modern young people are far more cosmopolitan, tolerant and progressive.

“There is a clear generational shift in Romania,” says Clark. “The rezist movement – mainly young people – provides real hope for the future. But there are still problems for Romania, and the biggest is not internal: it is the rise of the right globally, particularly in Eastern Europe. Hungary is not far away, and I still haven’t worked out the new president of Ukraine, he is a mystery. It will be key to see in which direction he pushes things. If Ukraine goes far-right, that puts more pressure on Moldova. If these external pressures continue then that gives impetus to the Romanian far-right. Not to neo-Nazi parties, but to mainstream groups pushing a far-right agenda.”

Doing business in Georgia: Is it really that easy?
Investing in the Macedonian economy
Comment