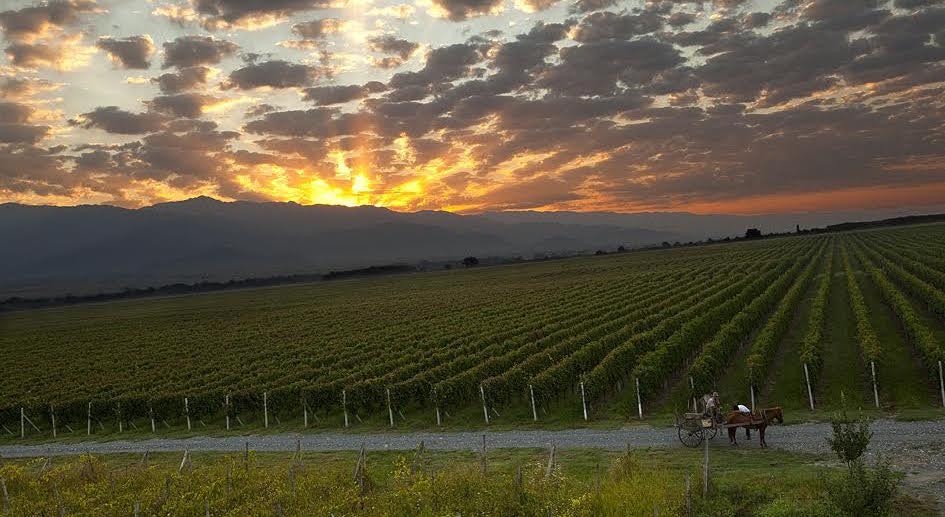 France may be Europe’s largest wine producer, but it is Georgia where wine was born.

It is said that wine production started about 7,000 or even 8,000 years ago and archeological remains found in the area suggest that as early as 4000 BC grape juice was placed in underground clay jars or qvevri to ferment during the winter. Last August, 43 ancient qvevries dated back to the 11-13th centuries were discovered by archaeologists at Khikhani Fortress, Adjara, Western Georgia.

In 2015, the World Bank spent over $1 million to enhance Georgia’s ancient Qvevri wine-making methods by establishing a Qvevri House in the eastern part of the country. That ancient traditional winemaking method was also added to the UNESCO Intangible Cultural Heritage Lists. Today, there are over 500 species of grape in Georgia, a greater diversity than anywhere else in the world, with around 40 of these grape varieties being used in commercial wine production.

Each year the country produces around 150 million litres of wine in around 45,000 hectares of vineyards that are under cultivation. In the first half of 2015, Georgia exported almost 17 million bottles of wine to 35 countries.

“While visiting a supermarket in Georgia’s capital of Tbilisi, foreigners can hardly miss the wine department, with girls wearing traditional costumes. They are offered a vast choice of wines to try, generously poured into full-size glasses. Soon a typical foreigner becomes perfectly aware of various brands of Kindzmarauli, Rkatsiteli, Mukuzani, Saperavi and dozens of other hard-to-pronounce but delicious Georgian wines – without spending a dime,” says Dr. Alexander Kaffka, Managing Director of Hvino.com, an English-language news portal about Georgian wine.

“The star grape from Georgia is undoubtedly Saperavi,” says Chris Bowling from the Georgian Wine Society. “This is Georgia’s national grape, and this is the variety that is getting western wine writers most excited. This deep purple grape is the variety used to create most of Georgia’s standout red wines, including Mukuzani DOC (DOC — Italian, controlled designation of origin) and Kindzmarauli DOC. It is used to create many of Georgia’s famous semi sweet wines, but its best incarnation is the powerful dry reds it can create, with fiery acidity and nice strong tannins.” he adds.

It is not only Georgians who can boast about a long and abundant winemaking tradition in Central and Eastern Europe. Moldova, which is shaped as a bunch of grapes, has a wine history that starts about 3,000 BC. It is a country where wine used to be a medium of exchange and a trophy awarded after fights. Now, not only is wine Moldova’s national product but the country also has the biggest wine collection in the world with over 1.5 million bottles, recorded in the Guinness Book in 2005.

According to Adrian Digolean from Wine of Moldova, a public institution established by the Law on Vine and Wine to implement the government policies in the field of viticulture, Moldovan wine has been acknowledged through a great deal of awards. At the Concours Mondial de Bruxelles in 2015, through Purcari and Chateau Vartely winery, Moldova managed to win four medals, one gold (Sauvignon de Purcari 2014) and three silver — Rose 2014 de Purcari; Pinot Grigio 2014 de Purcari; Feteasca Regală 2014 from Chateau Vartely. Our wines won a lot of awards during Decanter Wine Awards, Wine international contes Bucharest, Challenge International du Vin,” he lists.

The country boasts about three indigenous grape varieties. Feteasca Neagră has a history of over 2,000 years and is originally from the Prut river valley. Wine made from this variety has complex aromas with flavours of dark berries and sweet cherry with a long and fruit filled after-taste. Feteasca Alba produces delicate wines with floral aromas and is light and fresh. Fetească Regala preserves the elegance of rose flavours, wild flowers or dried apricots and almonds.

Now, Moldova produces about 115 million litres of wine in about 112 hectares of vinyards. The wine production sector accounts for 3.2 per cent of Moldova’s GDP and 7.5 per cent of the country’s export. The country’s production of wine is the highest in the world per capita.

“Because of the two bans imposed by the Russian Federation, Moldovan wine producers struggle for new markets. At the moment our top five EU markets are: Poland, the Czech Republic, Slovakia, Romania and Germany. We also export to the US, China, Nigeria, South Korea, Japan, Norway and Canada. All in all, our wines are exported to nearly 35 countries around the world,” says Adrian Digolean from Wine of Moldova.

According to Christy Canterbury, a New York-based wine expert, wines from Moldova certainly could claim a place on the wine list, if given a fair chance. “Prospects for the dry aromatic whites are fantastic,” she says.

Of course, we must not forget about other large wine producers in Eastern Europe: Hungary, Romania, Bulgaria, Serbia, Croatia and Slovenia, whose wines are also becoming increasingly popular on the tables of Western wine connoisseurs. Experts say that wines from Central and Eastern Europe are increasingly modern and consumer-friendly in style. Many producers offer an array of solidly crafted, international varietal wines—Merlot, Chardonnay or Sauvignon Blanc—some at incredible bargain prices.

In the World’s Wine Markets, a book published in 2013, Marek Rekowski says that the countries of Central and Eastern Europe, including Russia and Ukraine, produce over 26 million hectolitres of wine per annum, which is slightly more than half of what France or Italy produce.

Not much, one might say. Taking a glass half-full approach, we see opportunities, as consumers are increasingly demanding unique wine experiences, creating opportunities for lesser-known regions, including those in emerging Europe, to grow their market share.