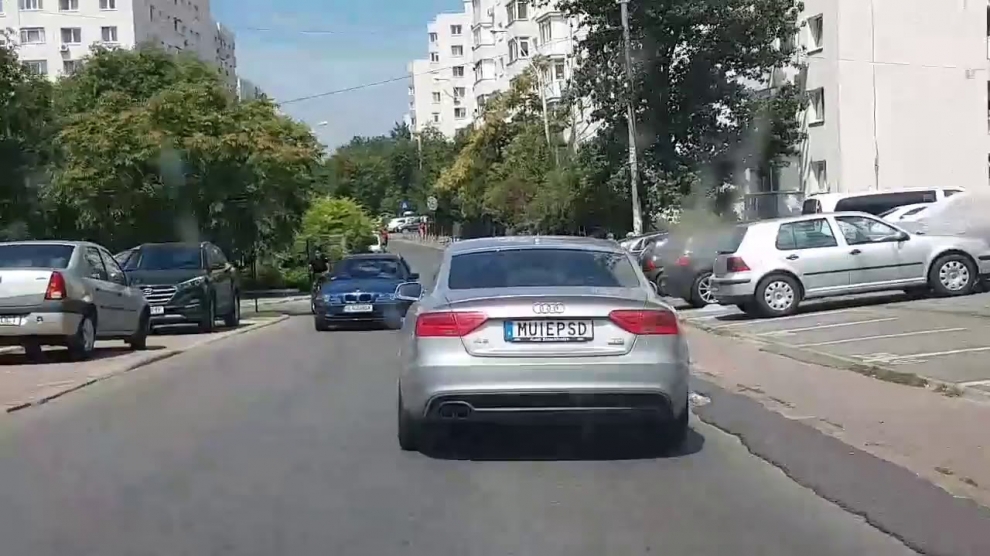 The car license plate of a Romanian expatriate living in Sweden, which first came to public attention last week, now risks becoming the subject of a diplomatic incident between Romania and Sweden.

The license plate in question, MUIEPSD, for which its owner paid almost 800 euros, translates in Romanian as, roughly, Fuck the PSD (the PSD being Romania’s current ruling party).

Since arriving in Romania the car’s owner, Răzvan Ștefănescu, has been subject to severe harassment by the country’s forces of law and order, who have handed out fines and who, on July 29, confiscated both the plates and Mr Ștefănescu’s driving license. Mr Ștefănescu has called the police action harassment.

“They stopped me at 5:50 in the morning,” he told reporters. “I was with my eight year old son. We were heading for the seaside. I think I must have annoyed someone high up.”

Codrin Ștefănescu (no relation), the PSD’s deputy leader, said that the plates are an insult to the party’s 850,000 members. “The Swedes probably didn’t realise what those letters meant. In Romania, we would never have allowed such a thing,” he told reporters, adding that, “the police have done the right thing confiscating the plates and his license.”

Besides claiming that they are offensive, the Romanian police have also insisted that the personalised plates are illegal outside of Sweden, as they do not contain any numbers and therefore contravene international standards.

“The United Nations Vienna Convention, which dates from 1968 and which was ratified by Romania in 1980 clearly states that license plates must include numbers,” said Marian Badea, the deputy chief of Romania’s traffic police, at a press conference.

However, on July 30 Sweden’s embassy in Bucharest issued a statement saying that the plates were perfectly legal both inside and outside of Sweden as long as the driver is in possession of the correct paperwork.

Mircea Marian, a senior editor at the Romanian edition of Newsweek, wrote on Facebook: “We might say that the Swedish embassy has also now told the PSD to fuck off.”

Furthermore, it emerged later on the same day that the Vienna Convention was amended in 2016 to allow for the use of plates which do not contain any numbers. Romania is a signatory to the 2016 changes.

In a show of solidarity, a Romanian family living in Belgium whose car carries the license plates 1 JOS PSD (1 Down with the PSD) today said that they would be driving to Romania over the next few days, in order to take part in a mass demonstration against the PSD planned by diaspora groups for August 10 in Bucharest.

Romania’s diaspora is traditionally deeply opposed to the PSD.