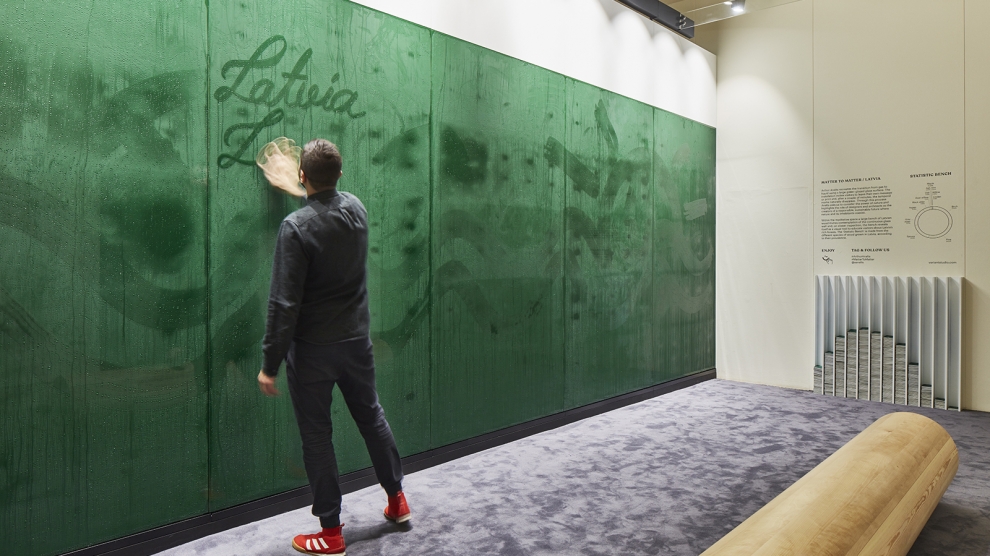 Latvian Arthur Analts of Variant Studio, who won the London Design Biennale’s Best Design Medal, has encouraged the Latvian government to showcase the country’s brand, natural resources and available talent. The young designer, inspired by his native city of Riga and its surrounding forests – which cover more than half of the country — recreated this using a large green-glazed surface as an interactive platform for the transition of matter to matter: gas to liquid.

“This is an indicator of creativity and design playing a more and more important role in everything we do,” Andris Ozols, director of the Investment and Development Agency of Latvia, tells Emerging Europe. “When you create a business concept – even in finance, aerospace and automotive – I think that it becomes a pure demonstration of design. But the role of our agency is to offer significantly more support than creativity. This is our business.”

The goal of the agency, which was ranked second in the recent Emerging Europe Investment Promotion Report, is to identify investment opportunities, which may include those possibly resulting from Brexit.

“On a government level – and even more importantly on a municipal level – companies seek opportunities where business centre data storage meets EU legislation. One of those opportunities is working on an international level with shared services centres and business process outsourcing. There are some business processors in London who were serving the entire world. There was a very important legal aspect that made them attractive: an address within the EU. On the one hand, electronic data can be kept wherever you want, but European legislation foresees that certain data should be kept within the geographic territory of Europe. Post-Brexit, that will not be the UK. That, of course, creates extra opportunities for other countries,” Mr Ozols adds.

Another area, according to Mr Ozols, where Latvia can make inroads is supporting education as a service. In Latvia, the sector is emerging as an export: more than 10 per cent of foreign students in the country are foreigners.

Latvia in general is a very important supplier for the UK market. One key sector is wood. “More than seven per cent of all UK demand is supplied by Latvia,” adds Mr Ozols. “We gain more added value. We started with timber and developed to plywood, energy wood and specific production lines and of course Latvia benefits very much from trade with the UK: it is one few countries with whom we have a significant trade surplus. Germany is the opposite.”