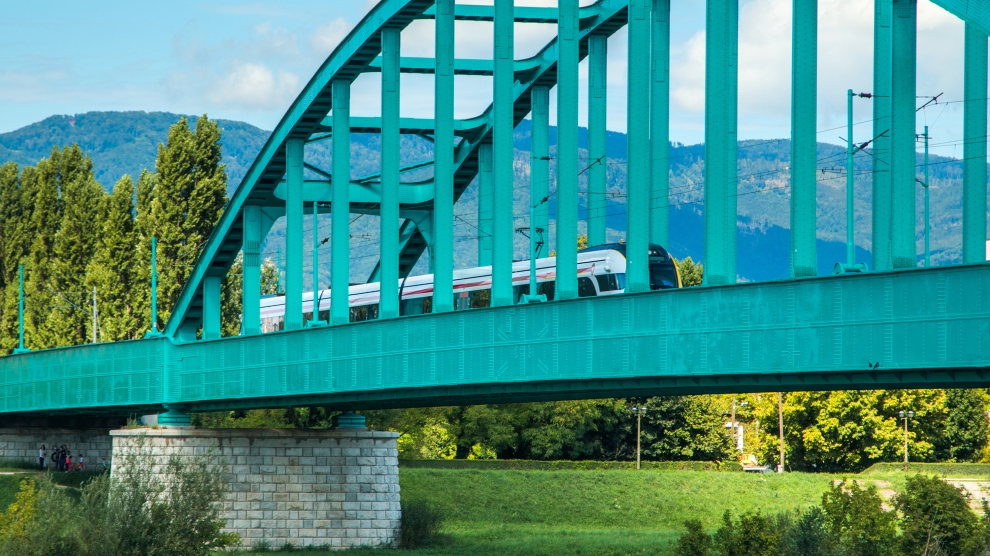 The ongoing protest against last weekend’s rigged election in Belarus is the biggest story of the week in emerging Europe: you can find all of our coverage here.

Croatian Railways (HZ) this week announced that it will launch a construction tender for track doubling of the 44 kilometre line from Hrvatski Leskovac – Karlovac line in September. The project, worth 2.3 billion kunas (306 million euros) is part of a wider project to double track the Rijeka – Zagreb – Budapest railway, and will be the most expensive infrastructure work ever undertaken by HZ and will be primarily financed through a European Union Cohesion Fund grant worth 1.96 billion kunas.

Hungary on Wednesday signed a declaration of intent to buy air defence missiles from US arms manufacturer Raytheon Technologies, Hungarian state news agency MTI reported, citing the country’s defence minister. The deal, worth around one billion US dollars, will be managed through the foreign military sales programme and will be concluded by the end of September, MTI added.

Officials in Poland who break the law with the intention of containing the coronavirus pandemic could go unpunished, according to a bill proposed by ruling party lawmakers. Praised for their implementation of a swift lockdown in the early stages of the pandemic, some government ministers have since come under criticism for issues surrounding the purchase of medical equipment. The draft bill says it is not a crime to break laws with the intention of counteracting Covid-19, if they were done in the interests of society.

Romania’s opposition Social Democrats (PSD) will file a motion of no-confidence in the government led by prime minister Ludovic Orban next week over incompetence in dealing with the Covid-19 crisis, PSD leader Marcel Ciolacu confirmed on Wednesday. “The PSD will not allow Romania to be sunk by the incompetence of the government,” Ciolacu said in a televised statement. The no-confidence motion will require 233 votes to bring down the government. The PSD has 210 seats in parliament, and but Ciolacu has said that he is confident of winning support from smaller opposition parties.

Romania’s government meanwhile this week agreed to hand 613.5 million lei (127 million euros) in aid to state-owned airline Tarom and low-cost carrier Blue Air in order to help them avoid bankruptcy due to the Covid-19 pandemic. “In the absence of state aid, there is a high probability that Tarom and Blue Air will default and eventually go bankrupt,” said the country’s transport ministry. The proposed state aid will need the approval of the European Commission before it can be disbursed.

Slovakia said on Monday it had expelled three staff at the Russian embassy in Bratislava whilst citing an abuse of Slovak visas, which local media said was linked with a murder of a Georgian man in Berlin last year. “According to information from the Slovak intelligence services, their activities were in contradiction with the Vienna convention on diplomatic relations,” a Slovak foreign ministry spokesman said in a statement. “On the top of that, there had been an abuse of visas issued at the Slovak general consulate in St. Petersburg, and in this connection a serious crime was committed on the territory of another EU and NATO member state,” he said. Russia said it would respond to the Slovak decision in kind.

Vienna Insurance Group announced on Wednesday that it expects pre-tax profit for the January-June period to slump 22 per cent after booking 120 million euros of Covid-19 pandemic related write-offs on assets in Bulgaria, Croatia and Georgia. The Austrian group said it expects profit before tax to come in at around 200 million euros in the first half.

Bulgaria’s Financial Supervision Commission confirmed this week that it has approved the initial public offering (IPO) prospectus of real estate investment company Square Cube Properties, which will seek to raise up to six million leva (3.1 million euros). Square Cube Properties will offer six million shares at a price of one lev apiece on the Bulgarian Stock Exchange, the financial authority said in a statement on Tuesday.

Ukrainian privately-owned conglomerate DCH told Reuters on Wednesday it had signed an agreement to buy a 25 per cent stake in national aircraft engine maker Motor Sich from Chinese investors. “In accordance with the agreement with Chinese partners, we will acquire more than 25 per cent of shares of Motor Sich,” DCH told the news agancy in a statement. Chinese investors, represented in Ukraine by Skyrizon Aircraft Holdings, last week announced a cooperation deal with DCH but they did not give details.

Schools in Armenia closed since March due to the coronavirus pandemic will reopen their doors to students on September 15, Education Minister Arayik Harutiunian said on Tuesday. Mr Harutiunian made the announcement after discussions among senior government officials coordinating the coronavirus state of emergency. The minister added that vocational training colleges and music and art schools will also reopen on September 15.

The European Bank for Reconstruction and Development (EBRD) and Romania’s Banca Transilvania, shareholders in Moldova’s Victoriabank, have said that they are “seriously concerned” by an indictment issued by Moldovan anti-corruption prosecutors in connection with fraudulent activities in the Moldovan banking sector in 2014, and the freezing of some of Victoriabank’s assets. The EBRD and Banca Transilvania said that they will resort to all legal means to protect Victoriabank, according to a statement issued shortly after local media published a document saying that a Moldovan court had granted a request to seize around 118 million euros of Victoriabank’s assets. Victoriabank is Moldova’s third-largest lender and has a 17 per cent market share with around 540,000 customers and almost 100 branches across the country.

Azerbaijan’s ambassador to Serbia Eldar Hasanov was detained on Thursday on suspicion of embezzlement of state funds. Criminal cases have been initiated against a number of officials of the Azerbaijani Foreign Ministry for “exceeding their powers and causing significant damage to the interests of the state protected by law,” the Azerbaijani State Security Service confirmed. “Reasonable suspicions that arose during the financial inspections, indicatie that the Ambassador of the Republic of Azerbaijan to the Republic of Serbia, Montenegro, Bosnia and Herzegovina, Eldar Hasanov, misused significant amount of budget funds and committed other other offences,” the Security Service noted.

Estonia’s European Commissioner Kadri Simson has criticised US threats of sanctions against European companies involved in building the Nord Stream 2 gas pipeline, saying it would violate international law. Simson told the German business daily Handelsblatt that the EU does not recognise restrictive measures imposed by third (non-EU) countries on European companies, if those companies comply with EU law.

The European Commission has approved a 30 million euros Estonian measure to provide a share capital increase and a subsidised interest loan to the state-owned aviation company Nordica. The scheme was approved under the state aid Temporary Framework. Nordica has established business partnerships with major airlines in Northern and Eastern Europe and plays a key role in Estonia’s connectivity.

Lithuania on Thursday designated the Lebanese militant Hezbollah group as a terrorist organization and issued a 10-year ban on all individuals related to the Iran-backed group from entering the Baltic nation’s territory. “After receiving valuable information from our foreign partners, we can assume that Hezbollah is functioning on the principles of terrorist organisation,” said Foreign Minister Linas Linkevicius.

Serbia is considering buying a modern Chinese air defense missile system, the Serbian president said Tuesday, as the United States warned that such deals with Beijing could jeopardize the Balkan country’s proclaimed European Union membership goals. President Aleksandar Vučić said that “we were thinking, but we have not yet purchased” the FK-3 system — the export version of the Chinese last-generation, medium range HQ-22 anti-aircraft system. Serbia, which has been beefing up its military mainly with Russian aircraft and armored vehicles, last month received six Chinese CH-92A attack and reconnaissance drones. That made Serbia the first European country to deploy the Chinese unmanned aerial vehicles.

Montenegro’s government plans to complete by 2025 the construction of a new container terminal at Bar port at an estimated cost of up to 2.5 billion euros, according to a document published by the transport ministry on Monday. The container terminal will have a footprint of 140 hectares and will be able to receive some of the world’s largest container ships. The ministry is also mulling the construction of a liquefied natural gas (LNG) terminal at Bar under a concession contract or a public-private partnership scheme.

Bosnia and Herzegovina’s tourism sector shrank by 70.6 per cent year-on-year in the first six months of 2020 due to the coronavirus crisis, data from its state statistics agency showed this week. Before the global pandemic, the Balkan country had recorded several years of double digit tourism growth, with 1.5 million tourists visiting in 2019. Thousands of workers in tourism, which last year accounted for 10.2 per cent of Bosnia and Herzegovina’s economic output, have been laid off as a result of the crisis.

Former Kosovan prime minister Ramush Haradinaj is being promoted as Kosovo’s possible next president after his party authorised him on Wednesday to represent it in discussions with its coalition partners on a potential reshuffle – and on who the next president should be. In a press release, the steering council of the Alliance for the Future of Kosovo, AAK, said it had “authorised party leader Haradinaj to hold any talks on behalf of the Alliance on the eventual reconfiguration of the government, including the issue of the president if this is on the agenda”. Current president, Hashim Thaçi, was indicted on war crimes charges in May by a court in The Hague, and has said he will resign if the indictment is confirmed.

Kazakhstan has reportedly proposed a 15 per cent flat-rate tax on Bitcoin mining. Kazakhstan contributes an estimated six per cent of the global BTC hash rate – the measuring unit of the processing power of the Bitcoin network – second only to China, according to Russian outlet Crypto.pro. This is due to a friendly environment for Bitcoin miners, including lax regulation of the digital currency industry and low electricity prices.

Kyrgyzstan’s foreign ministry has called on Belarus to explain why Alexander Lukashenko made a recent public appearance with a man who looks like Kyrgyzstan’s wanted former prime minister, Daniyar Usenov. Mr Usenov, thought to be living in exile in Belarus, has been sought for years by Kyrgyz authorities in connection with the deaths of nearly 100 people in April 2010 when security forces in Bishkek fired live ammunition at anti-government demonstrators. Lukashenko appeared next to the man while visiting the Belarusian National Biotechnological Corporation on August 10, the day after a rigged election in which he has claimed victory.

Uzbekistan has approved a development plan for the Ferghana Valley exclave of Sokh, a slice of territory entirely within Kyrgyzstan, that envisions the resumption of flights to the rest of the country and tax breaks. Sokh is home to around 85,000 people, the vast majority of whom are ethnic Tajiks. The government in Tashkent has recently come under fire from people in the exclave, who say that they have been abandoned.

A team of World Health Organisation (WHO) experts has finally received permission from the Turkmenistan government to conduct independent Covid-19 testing in the Central Asian country, WHO’s Regional Office for Europe has revealed. Turkmenistan continues to insist that the country does not have Covid-19 cases despite an ongoing outbreak in infectious respiratory illnesses with symptoms similar to the novel coronavirus disease.

Strikes could signal the end for Belarus dictator Lukashenko
Second lockdown would be disastrous for CEE economy, economists warn
Comment