The situation in Belarus remains the biggest story in emerging Europe: you can find all of our coverage here.

A Slovak court on Thursday found a politically connected businessman not guilty of charges that he ordered the 2018 murder of investigative journalist Ján Kuciak (pictured above), a case that shook the nation and brought down the country’s prime minister Robert Fico. The court did, however, sentence another defendant, Tomas Szabo, to 25 years in prison for helping carry out the murder. Two others have already been convicted in the case after admitting guilt. One of them, a former soldier, received 23 years in prison for killing Kuciak and his girlfriend, while another admitted to facilitating the murder and was given a 15-year sentence.

Bulgarian Prime Minister Boyko Borissov is “pouring oil on the fire” with his plans to push through controversial new constitutional reforms, an opposition leader has said. Hristo Ivanov, the leader of the Yes, Bulgaria! party, said that the prime minister’s plans to amend the constitution had already “reached a dead end”, saying he is unlikely to secure the 160 votes he needs in parliament to push through the final changes. The government did, however, secure a majority in parliament on Wednesday to initiate debates on a revised draft of the constitution in an attempt to appease public anger, the same day violence broke out on the streets of the capital Sofia at one of the largest demonstrations in nearly 60 days of anti-government protests.

Facebook’s security department this week shut down several accounts belonging to a publication that presents itself as an independent global news organisation primarily based in Romania, “for violating our policy against foreign interference”. Using elaborate fake online profiles spanning multiple sites, the network’s members posed as a news organisation called PeaceData, recruiting freelance journalists to write stories for left-leaning audiences.

Students at Hungary’s University of Theatre and Film Arts sealed entrances to the building on Wednesday to stop the new board of trustees getting in, and pledged to maintain the blockade until demands for autonomy from government control were met. The prestigious institution, which nurtured many of Hungary’s most famous directors and film makers over the past 155 years, has been caught up in a culture war as Prime Minister Viktor Orbán’s nationalist government expands its control over universities, research institutions and the media. Some of Mr Orbán’s supporters say they want to end what they view as the domination of the arts in Hungary by liberals.

Poland’s deputy prime minister, Jacek Sasin, said on Thursday that the closure of its coal mines in coming decades was “inevitable” in light of the European Union’s climate policies. Poland generates most of its electricity from burning coal, which has become costly due to rising prices of carbon emission permits. The industry has also struggled with falling demand for coal, which accelerated during the Covid-19 lockdown because the country used less power.

Czechia’s economy shrank more than expected in the second quarter of 2020, largely due to a slump in external demand as global trade was hurt severely by the coronavirus pandemic, latest data from the Czech Statistical Office (CZSO) showed this week. Price and seasonally adjusted gross domestic product decreased a record 8.7 per cent, which was more severe a fall than the 8.4 per cent decline estimated initially. The first quarter slump was revised to 3.3 per cent from 3.4 per cent.

The European Investment Fund (EIF) and Croatian Bank for Reconstruction and Development (HBOR) will support three private equity funds in Croatia and unlock up to 205 million euros of investments in growth, expansion, innovation and improved international competitiveness of local SMEs and small mid-caps, it was announced this week. “This agreement will make a big difference to many companies in Croatia, both SMEs and mid-caps, by making more than 200 million euros in fresh financing available to them at this challenging time,” said European Commission Executive Vice-President for an Economy that Works for People Valdis Dombrovskis.

The World Bank this week agreed to provide Georgia with support worth 40 million US dollars for its Log-in Georgia Project, which aims to provide people, enterprises, and institutions across rural Georgia with high-quality internet connections, and promote the use of digital services. Part of Georgia’s National Broadband Development Strategy for 2020-2025, the project will help connect up to 1,000 villages, including settlements in mountainous regions, to high-quality and affordable broadband services. Nearly 500,000 people, residing in locations currently unserved by broadband services, stand to benefit.

US Ambassador to Georgia Kelly Degnan warned on Wednesday that country should expect Russian interference in its general election, scheduled for October 31. “There is a long pattern of interference through disinformation campaigns and other efforts that have been fairly consistent, not just related to the election but in general,” said the ambassador. “Political leaders getting out there with their campaigns, educating voters about the issues that are important to them – education, economic recovery, healthcare – is the way to ensure voters go to the polls well informed and ready to cast their ballots, and the best way push back against disinformation from Russia or anywhere else.”

Armenia’s Foreign Minister Zohrab Mnatsakanyan said on Monday that Turkey’s “actions” remain a threat to Armenia’s national security. “After recent hostilities on the Armenian-Azerbaijani border the international community made numerous calls for de-escalation and an end to violence. Turkey was the only country in the region to try to bring even greater instability to the region, instead of trying to reduce tensions,” Mnatsakanyan told the Russian Interfax news agency in an interview.

Japan Rating and Investment Information (R&I) has upgraded Ukraine’s foreign currency issuer rating from B to B+, with a rating outlook of stable. “When fiscal consolidation efforts to date and enhanced resilience to external shocks are also taken into account, economic and fiscal conditions are expected to recover in 2021 and beyond,” R&I said on Thursday. The ratings agency added that the International Monetary Fund’s financial support for Ukraine, together with loans from the World Bank and the European Union, will help stabilise the government’s funding.

An Israeli Hasidic Jewish man has been beaten by local residents during a pilgrimage to a Ukrainian town, police said Wednesday. Ukrainian police said several people assaulted the pilgrim during a conflict at a shop in Uman. They said the incident is being investigated. The pilgrim who was attacked has a residence permit in Ukraine, according to the United Jewish Community of Ukraine. Uman is home to the grave of an important Hasidic rabbi, Rabbi Nachman of Breslov, and tens of thousands of pilgrims visit the city each September to mark Rosh Hashanah — Jewish New Year. 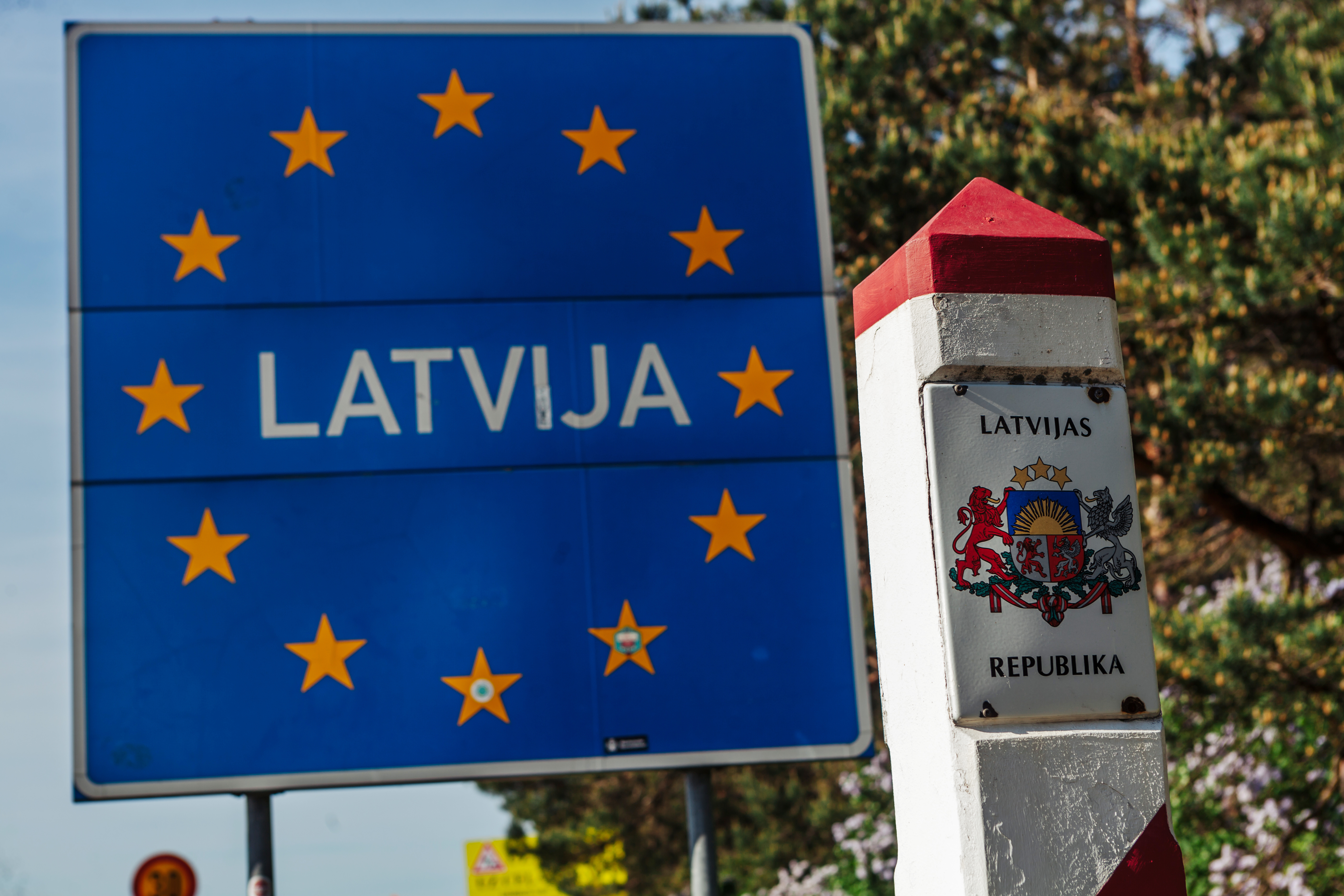 Travelers from Lithuania and Estonia will have to self-isolate for two weeks upon arriving in Latvia as of September 4. As coronavirus infection rates have jumped in Lithuania and Estonia, the decision spells the end of the so-called Baltic bubble, which had offered restriction-free travel for Baltic residents across the three countries since mid-May. Latvia currently has the lowest coronavirus infection rate in the Baltics and one of the lowest in Europe. It has reported 4.2 infections per 100,000 people over the past two weeks. Lithuania’s incidence rate stands at 16.8, while Estonia’s is 15.7.

Lithuania’s government said on Wednesday it will ask the European Court of Justice to halt some of the proposed new European trucking rules from taking effect, saying they discriminate against its drivers. Lithuania objects to rules that force trucks to return to their home countries every eight weeks and limits their operations in other EU member states. Eight, mainly eastern countries, had taken issue with the new trucking rules, which they said could cripple businesses already facing disruption caused by border controls within the bloc triggered by the pandemic.

Kosovo’s Prime Minister Avdullah Hoti says his meeting with Serbian President Aleksandar Vučić on September 3 at the White House was a “big step” towards concluding an agreement between Kosovo and Serbia. However, Mr Vučić objected to what he said was Kosovo’s effort to force Serbia to recognise the independence of its former territory.  Vučić told reporters that he hoped to reach an agreement without the recognition of Kosovo’s independence. Talks will continue on September 4.

Montenegro’s ruling Democratic Party of Socialists (DPS) is ready to go into opposition after being in power for almost 30 years, the country’s president Milo Đukanović said on Thursday. “By accepting the outcome of the election, we are ready to be the strongest opposition party, which will take into account the strategic national interests in the coming period, as it has done so far,” Đukanović said in an interview with Austrian public broadcaster ORF. Earlier this week, the opposition coalition For the Future of Montenegro, the runner-up in last Sunday’s general election, agreed to partner with pro-European coalition Peace is Our Nation and the green party United Reform Action (URA) in order to form the country’s next government. Together, the three groups now hold 41 of 81 seats in parliament.

North Macedonia’s parliament has approved a new government led by the country’s former prime minister, Zoran Zaev, ending weeks of political uncertainty that followed an inconclusive general election in July. Mr Zaev, who resigned last year in order to bring about the early election, returns to office at the head of a coalition government that includes his own Social Democrats and the Democratic Union for Integration (DUI), one of the parties that represents the country’s significant Albanian minority. Together, they can count on 62 votes in the 120-seat parliament.

The Organisation for Security and Co-operation in Europe (OSCE) in Albania this week launched a project aimed at strengthening the capacities and increasing the transparency and accountability of the country’s public procurement system. The project, which has the support of the Permanent Delegation of Italy to the OSCE, will conduct research to identify risks and prevent corruption in public procurement. It will provide recommendations to improve the policy framework and capacity development, as well as promote data transparency and data monitoring among civil society actors.

Tens of thousands of youngsters headed to sports arenas across Uzbekistan on Wednesday to sit university entrance exams in the open air due to the coronavirus pandemic. The massive exercise, which will span two weeks, will see more than 1.4 million applicants take a three-hour test while seated at desks on the running tracks or walkways of the stadiums. They are competing for some 150,000 university places under a centralised admissions system.

A new Pentagon report has warned that China may be eyeing new military bases in neighboring Tajikistan, where the People’s Liberation Army (PLA) already operates at least one clandestine outpost. The September 1 report to Congress said Beijing is “seeking to establish a more robust overseas logistics and basing infrastructure to allow the PLA to project and sustain military power at greater distances.” Tajikistan is listed as one of 12 countries the PLA “has likely considered.” China officially operates only one base overseas, in Djibouti.

Turkmenistan this week announced that mosques in the country will remain closed until at least October 1, in order to prevent the spread of Covid-19. This is despite the country not yet registering (officially, at least) a single case of the virus. Mosques have been closed in the country since July.