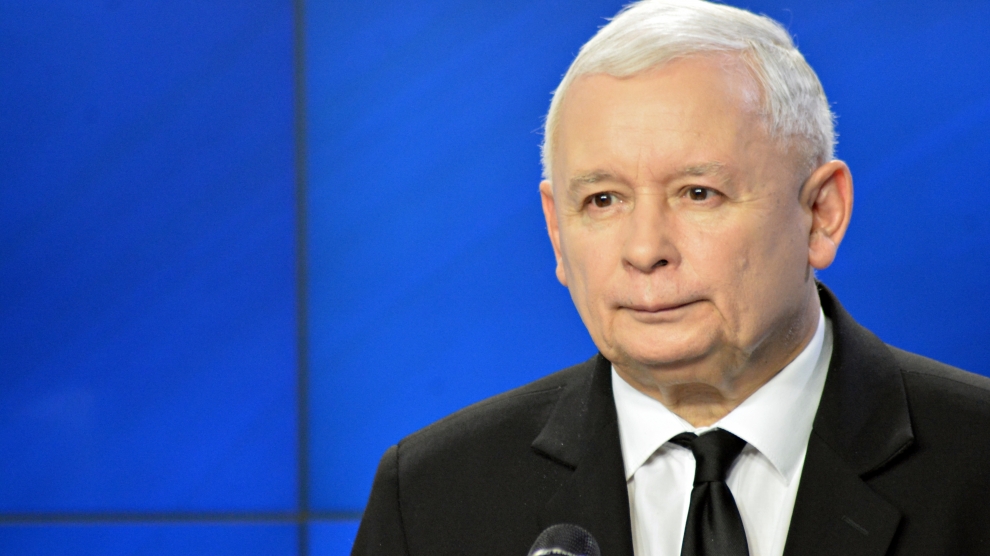 Poland’s Prime Minister Mateusz Morawiecki confirmed on Wednesday that the leader of the ruling Law and Justice (PiS) party, Jarosław Kaczyński, will return to government as deputy prime minister. Mr Kaczyński briefly served as Poland’s prime minister from 2006-7 but has not held a cabinet post since then, although he has long been viewed as the country’s de facto ruler. As part of the reshuffle, which shifts the Polish government further to the right, Przemysław Czarnek, a Catholic university lecturer who once called a gay pride march “a disgusting display of one’s sexuality”, has been named minister of education.

A month into a blockade of Hungary’s top arts university, hundreds of students rebelling against control by Prime Minister Viktor Orbán’s government show no sign of quitting. “The blockade remains until our demands to restore the university’s autonomy are met,” said Aron Heppes, 23, a film set design student at the University of Theatre and Film Arts (SZFE) this week. Heppes and dozens of other students began the sit-in September 1, a day after SZFE’s management resigned in protest at their loss of autonomy to a new, government-picked board whose trustees are appointed indefinitely. The move is seen by Mr Orbán’s opponents as the latest step in his attempt to reshape Hungary’s public life to fit his own nationalist and culturally conservative agenda.

A new state of emergency will be put in place throughout Slovakia and Czechia from October 1 and 5 respectively, it was announced this week. All schools will be closed and public events cancelled. The move comes as the number of Covid-19 infections in both countries reaches record high levels. The situation is particularly worrying in Czechia, where more than 30,000 new cases of Covid-19 have been recorded over the past two weeks.

British American Tobacco (BAT) has been the biggest foreign investor in Croatia over the past five years, shows a study by Oxford Economics on BAT’s influence on Croatia’s economy revealed this week. After investing almost 4.2 billion kuna (555.6 million euros) in taking over the local TDR tobacco company, BAT has over the past five years invested an additional 490 million kuna and continued to increase production, employment and exports. The total of 4.7 billion kuna in investments means that during the period between 2015 and 2019, BAT generated about 20 per cent of the total foreign investments in Croatia, the analysis notes.

Bostjan Jazbec of Slovenia is one of two candidates put forward to succeed Yves Mersch at the executive board of the European Central Bank, it was confirmed this week. The other candidate is Frank Elderson of the Netherlands. Mersch’s 8-year term on the ECB’s board ends in December along with his mandate as the deputy chair of the ECB’s bank supervision arm. Mr Jazbec is a former boss of the Slovenian national bank.

S&P Global Ratings warned Romania on Tuesday that a move by parliament to reinstate a 40 per cent raise in pensions would prompt a disorderly fiscal correction just as the economy is struggling with the impact of the coronavirus pandemic. Romania’s parliament voted this month to raise all state pensions by 40 per cent, undoing a smaller 14 per cent hike by the centrist minority government and opening the way for potential ratings downgrades two months before a parliamentary election. The government, which has tried to curb social spending surges backed by the opposition Social Democrats – parliament’s biggest party – will challenge the pension hike in the top court and stall for time until a December 6 parliamentary election it is seen winning.

Fighting between Armenia and Azerbaijan continues in the disputed region of Nagorno-Karabakh. Dozens have been reported killed and hundreds wounded in fighting since Sunday that has spread well beyond the enclave’s boundaries, threatening to spill over into all-out war between the two former Soviet republics. Russian Foreign Minister Sergei Lavrov said on Wednesday that Moscow was willing to host the foreign ministers of Armenia and Azerbaijan for talks. NATO meanwhile has been angered by the comments of Turkish Foreign Minister Mevlut Cavusoglu, who said on Wednesday that Turkey would “do what is necessary” when asked whether Ankara would offer military support if Azerbaijan asked for it.

A Minsk court on Wednesday sentenced Belarusian basketball player Yelena Levchenko to 15 days in jail for taking part in protests demanding the resignation of President Alexander Lukashenko. Belarus has seen weeks of mass demonstrations since veteran leader Lukashenko was declared the landslide winner of an August 9 presidential election widely viewed as being rigged. Levchenko, a player on the women’s national team and a championship winner in the Russian, Lithuanian and Polish leagues, is one of the founding members of a movement among athletes calling for new presidential elections.

Four people died and ten were hospitalised as a series of forest fires swept through part of the eastern Ukrainian region of Luhansk, Ukraine’s emergency service said on Thursday. The fires threatened 22 settlements and engulfed an area of about 18,000 hectares, the service said in a statement, adding that 120 people were evacuated. Local authorities said there were a total of 146 fires, 82 of them were extinguished. Most of the fires are located near the area controlled by pro-Russian separatists and local Ukrainian authorities have stated that the fires may have been caused by shelling from the separatists.

Estonia, Sweden and Finland will look into fresh evidence on the sinking of the ferry Estonia, which went down 26 years ago with the loss of 852 lives in Europe’s worst peacetime maritime disaster since World War II. The roll-on roll-off ferry, carrying 803 passengers and 186 crew, sank on a stormy Baltic Sea shortly after midnight on September 28, 1994. The official investigation in 1997 concluded that the bow shield had failed, damaging the bow ramp and flooding the car deck. However, Sweden said that a Discovery Network documentary about the disaster included new underwater video images from the wreck site showing damage on the starboard side of the wreck.

Lithuania’s Ignitis Grupe’s initial public offering (IPO) is expected to be priced at 22.50 euros, at the low end of its marketed range, valuing the Lithuanian state energy company at 1.69 billion euros. The stock was offered at 22.50-28.00 euros per share but bookrunners organising the IPO said they were guiding investors to expect a price of 22.50 euros. The company is expected to list on or around October 7 on both the Nasdaq Vilnius and the London Stock Exchange.

Dozens of migrants from the Middle East and Africa this week set up tents outside Subotica, a town in northern Serbia, with a view to crossing over the nearby border with Hungary and on to Western Europe. According to the Asylum Protection Centre, there are around 1,000 migrants in the northern province of Vojvodina waiting to try to cross into neighbouring countries including Romania and Hungary en route to wealthier parts of the continent. A further 1,000 or so were in Belgrade, many of them living in the open air in parks or on river banks before they also moved north towards the border.

North Macedonia is seeking 426 million euros of funding from international financial institutions for a proposal to extend the 103-kilometre Skopje-Kicevo line, 62.6 kilometres southwards to the border near Albania. The proposal was approved by the government this week and the ministry of finance will now look for investors, bilateral creditors, and grants to realise it. The single track line includes 4.5 kilometres of bridges and 12.4 kilometres of tunnels and can accommodate a maximum speed of 100km/h.

Higher tax revenue is essential to support much needed investment in physical and human capital in Albania, the International Monetary Fund (IMF) said this week. According to the IMF, Albania’s tax system is complex and fragmented, and frequent ad hoc changes have undermined its stability and transparency. The lender believes that a fairer, simpler, more efficient, and more transparent tax system can boost revenue mobilisation while also improving the investment climate and reducing informality.

Israel Aerospace Industries (IAI) will open a cyber academy in Bosnia and Herzegovina, announcing on Wednesday that it has entered a collaboration agreement with Bosnia’s ministry of education and science. Under the agreement, the cyber experts of IAI’s ELTA Group and IAI’s Singapore subsidiary, Custodio Technologies, will provide remote online training on TAME Range, IAI’s cyber simulator and trainer.

Kosovo’s government will allocate 87 million euros for the implementation of an economic recovery plan to support firms and citizens affected by the Covid-19 pandemic. The country’s prime minister, Avdullah Hoti, said this week that the bulk of the money will be distributed in the form of subsidies to companies so that they can continue to pay the salaries of workers.

Health officials in Uzbekistan have said the country intends to take part in testing trials for Covid-19 vaccines being developed by scientists in China and Russia. The head of the State Sanitary and Epidemiological Welfare Agency, Bahodir Yusupaliyev, said this week week that Uzbekistan would also like to pursue its own production of any eventual vaccine devised. “The government of Uzbekistan has signed agreements with two Chinese companies to conduct the final stage of trials of vaccines against coronavirus. We also offered Russian companies the chance to jointly test their vaccine in Uzbekistan,” he said.

The US Agency for International Development (USAID) this week announced the establishment of new bilateral missions in Tajikistan and Uzbekistan at an event hosted by the Heritage Foundation. The announcement comes just months after the public launch of the United States Strategy for Central Asia 2019-2025 and is another example of USAID’s long-term commitment to the people of Central Asia, said the US Embassy in Dushanbe.

The first batch of wind turbines of Kazakhstan’s Zhanatas wind power plant has been put into operation, the press service of China Power International Holding Limited said in a statement on Wednesday. Located in south Kazakhstan’s Zhambyl Region, the 100 megawatt wind power plant is the largest of its kind in Central Asia. The plant, whose total cost is estimated at 150 million US dollars, is the first project funded by the Asian Infrastructure Investment Bank (AIIB) in Kazakhstan. The Almaty branch of the Industrial and Commercial Bank of China and other financial institutions also provided loans to the wind farm.

Turkmen Railways has extended the suspension of train services until November 1, it was announced this week. The Turkmen government claims that the measure is necessary to prevent the entrance of Covid-19 into the country. To date, Turkmenistan has reported no coronavirus cases, although human rights groups claim that growing numbers of people are dying after presenting symptoms similar to those of Covid-19.