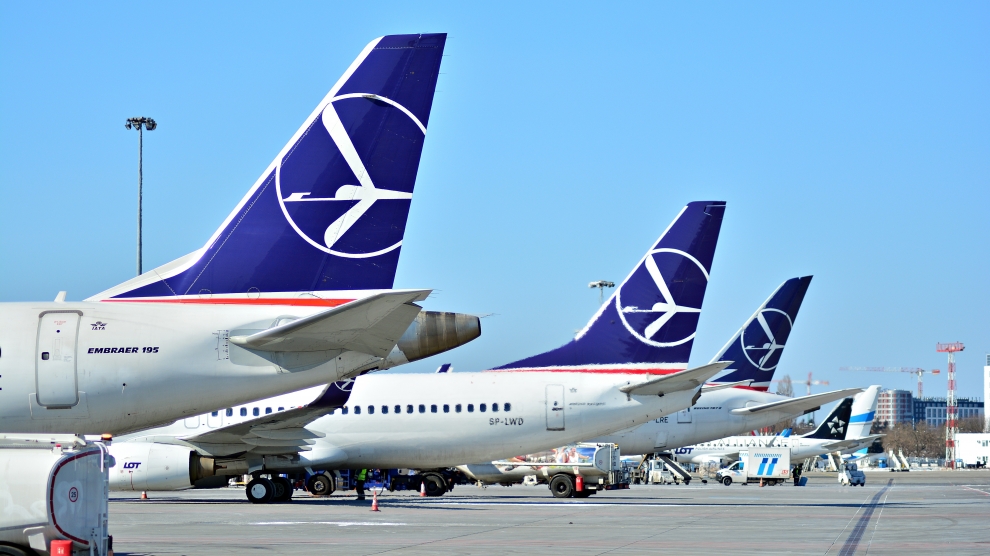 Poland’s government has approved financing of 12.8 billion zloty (2.77 billion euros) for the initial phase of the so-called Solidarity Transport Hub, a project combining a new airport located between Warsaw and Łódź in central Poland with railway interchanges and road connections. The first phase of the project will run from 2020 to 2023, and will mostly consist of planning and the purchase of land. The airport is scheduled to be operational by 2027, with an initial capacity of 45 million passengers per year.

Bulgaria’s government this week approved the country’s 2021 draft budget with a deficit of 3.9 per cent of economic output, offering more support for those hit by the Covid-19 crisis and boosting public sector wages and pensions in a general election year. Like other countries, Bulgaria increased spending to contain the crisis with millions of leva in wage subsidies and business loan guarantees and support for pensioners, turning its plans for a balanced budget into a forecast deficit of 4.4 per cent of gross domestic product for 2020. The country’s centre-right cabinet, under pressure from anti-government protests and a spike in coronavirus infections, has dubbed the 2021 budget “anti-pandemic” and plans to put 2.5 per cent of GDP to support frontline medics, vulnerable groups and jobs.

Jan Blatný, a prominent hematologist, has been appointed Czech health minister following the resignation of Roman Prymula. Mr Prymula resigned after just 38 days in the job after a series of tabloid photos showed him exiting a restaurant last week without a face mask. Czechia was praised for its swift initial response to the coronavirus crisis, but seven months on it’s now recording 15,000 new cases a day and has the second highest per capita death rate over seven days in the world.

A Romanian court on Thursday handed a five year prison sentence to a former parliament speaker, Bogdan Olteanu, on charges that he demanded a bribe of one million euros to influence the government over a key appointment. The Bucharest Court of Appeal also ordered Olteanu to pay back the one million euros. The court said Olteanu, a senior member of the ruling Liberal party at the time, had requested and received the money from a media mogul, Sorin Ovidiu Vantu, between July and November 2008. The kickback was payment for the government appointing Liviu Mihaiu, a journalist, who worked for one of the mogul’s companies, as administrator of the Danube Delta national park.

Romania’s largest oil and gas group, OMV Petrom, said on Thursday that its net profit fell 70 per cent year-on-year to 826 million lei (169 million euros) in the first nine months of 2020. Sales fell 17 per cent year-on-year to 15.1 billion lei in the nine months through September. The negative performance was mainly caused by lower oil and gas prices, OMV Petrom said in its third-quarter, unaudited consolidated financial statement filed with the Bucharest Stock Exchange.

Dutch insurer Aegon has put its central and eastern European business up for sale as it seeks to raise cash to better cope with the fallout of the coronavirus crisis and revamp earnings in its core markets, two sources familiar with the matter said. Aegon is working with JP Morgan on the process and has held preliminary discussions with industry players to sell the unit, which is primarily focused on Hungary but is also active in Poland, Romania and Turkey, the sources said.

Joe Biden this week voiced support for Belarus’s opposition in its general strike against President Alexander Lukashenko, saying the embattled leader’s reign was illegitimate. Biden, who leads President Donald Trump in polls ahead of next week’s US election, promised if he wins to “significantly expand” sanctions alongside European allies against “Lukashenko’s henchmen”. On Thursday, Lukashenko fired his interior minister, Yury Karayev, who authorised use of lethal weapons against protesters, replacing him with Ivan Kubrakov, the Minsk police chief.

Ukraine’s Constitutional Court this week stripped the country’s anti-corruption agency of some of its critical powers. The high court’s ruling, published on Wednesday, declared it unconstitutional to hold officials criminally liable for intentionally providing false information on asset declarations. The court decision may impact lending from the International Monetary Fund and threaten visa liberalisation with the European Union. Anti-corruption campaigners said the ruling undermines Ukraine’s battle against graft.

Georgia will hold parliamentary elections on Saturday, with citizens going to the polls to elect the country’s 10th national legislature since independence from the Soviet Union in 1991. For the first time, the elections will be held using a mixed electoral system, with 120 members of parliament to be elected via party lists and the remaining 30 running in single-member, direct-voting districts. According to the latest opinion polls, the ruling Georgia Dream party is expected to win around 60 per cent of the vote.

Lithuania this week sent a protest note to Belarus over a planned nuclear power plant that is scheduled to start operating in early November. The Astravets nuclear power plant, 40 kilometres south of Vilnius, Lithuania’s capital, could begin production between November 1-10, Belarusian operator Belenergo told Lithuania’s power transmission system operator Litgrid on Monday. “We are categorically against such a hasty launch,” said Asta Skaisgiryte, an adviser to the Lithuanian president, Gitanas Nausėda. Ever since work began on the construction of Astravets, which has been plagued by accidents, Lithuania has continually voiced its concern over the safety of the plant, which is being financed and constructed by Russian nuclear giant Rosatom.

Estonian information portal koroonakaart.ee, which provided multilingual real-time data on the coronavirus in Estonia, ceased operations this week after the site’s co-developer, Keegan McBride, decided to protest against the current Estonian government’s homophobic attitude. “The current government coalition has shown time and time again that, to them, some people are more equal than others. During a global pandemic, when families all around Estonia are suffering, the government’s most pressing issue is whether or not two people who love each other can get married,” said McBride. Koroonakaart.ee was created in March during the Estonian-initiated online hackathon, Hack the Crisis, to tackle the coronavirus crisis.

Latvia’s parliament on Thursday approved the country’s budget for 2021, which foresees a deficit of 3.9 per cent of GDP. Consolidated budget revenue is planned at 9.58 billion euros, down 328 million euros from this year. Next year’s budget expenditure, meanwhile, is projected at 10.76 billion euros, which is an increase of 744 million euros.

Serbia’s prime minister Ana Brnabić said on Wednesday that her new government will be pro-European but will also maintain “friendly” relations with Russia and China. Brnabić made the comments in an address to parliament before it overwhelmingly approved Serbia’s new government, which is dominated by allies of the country’s president Aleksandar Vučić. Brnabić, who also led the previous cabinet, said that the task of the new government will be to speed up “the process of European integration” by making rule of law and democratic reforms in line with requirements for joining the European Union.

Bulgaria, Kosovo, and North Macedonia this week signed declarations with the United States on the security of 5G wireless communications networks under which they committed to protect their networks from “untrusted” Chinese tech companies such as Huawei. The move makes the three countries members of Washington’s so-called clean network initiative aimed at ensuring trustworthy companies build 5G networks. “With today’s historic signing of a 5G security memorandum, Bulgaria has joined the Clean Network, and joins a growing coalition of countries and companies committed to protecting their 5G networks from untrusted vendors,” the US Embassy in Sofia said on Twitter.

Albania held an online forum against anti-Semitism on Wednesday, the first time such a meeting has been staged in the Balkans, with Prime Minister Edi Rama calling anti-Semitism “a threat to our own civilisation.” The Balkans Forum Against Anti-Semitism was organised by Albania’s parliament in partnership with the New York-based Combat Anti-Semitism Movement (CAM) and the Jewish Agency for Israel. It was held online due to the virus pandemic. “We need to continue and fight any form of anti-Semitism, which is a threat to our own civilisation, upon which our common future is being built,” said Mr Rama.

Authorities in Bosnia and Herzegovina have detained two people suspected of taking part in the killing of at least 78 civilians during the 1992-95 war, the prosecutor’s office said on Tuesday. The two men were apprehended in the area of Banja Luka, the main town in the Bosnian Serb-run part of the country, according to a statement. They are suspected of crimes against humanity over June 1992 killings in the northwestern village of Velagici. Bosnian Serbs slaughtered imprisoned Bosniak civilians, who are mainly Muslims, outside the school building with automatic weapons.

The countries of the Western Balkans are expected to abolish roaming fees in July 2021, the secretary-general of the Regional Cooperation Council (RCC) Majlinda Bregu confirmed this week. Bregu added that the RCC’s mid-term goal was to reduce roaming charges for calls between the Western Balkans and the European Union. In April 2019, the six countries of the Western Balkans signed an agreement to abolish roaming charges in 2021. Under the agreement, a transition period started on July 1, 2019, when the roaming fees for calls between Serbia, Bosnia and Herzegovina, Kosovo, Montenegro, and North Macedonia were lowered by 27 per cent, while for Albania the reduction was 85 per cent.

A group of international finance institutions this week agreed to support Kazakhstan’s further transition from coal-fired power plants to renewables by financing the construction of a 100 MW wind farm near the town of Zhanatas in the south of the country. The European Bank for Reconstruction and Development, the Asian Infrastructure Investment Bank, the Industrial and Commercial Bank of China and the Green Climate Fund will together provide a total of 96.6 million US dollars to be used by Zhanatas Wind-Power Station, a special project company run and owned by China Power International Holding in partnership with Visor Investments Coöperatief, to construct and operate the wind farm as well as to build an 8.6-kilometre 110 kV single-circuit line connecting the facility to the national grid.

Large parts of Kyrgyzstan’s capital Bishkek suffered power and heating system outages on Thursday as a result of what officials say was an automatic shutdown provoked by a system failure of high-voltage transmission lines. National Energy Holding, the state-run entity that runs the power sector, said the emergency suspension of operations at the city’s main power plant, or TETs, was intended to prevent damage to equipment. In January 2018, thousands of homes in Bishkek endured days of cold because of a malfunction at the plant, an episode that provoked considerable anger and led to the arrest and prosecution of Sapar Isakov, who was prime minister of the country at the time.

Uzbekistan’s, Uzbekhydroenergo, the country’s state hydropower producer and developer, has successfully secured an international credit rating from Fitch Ratings. Fitch has assigned Uzbekhydroenergo a long-term foreign currency issuer default rating of ‘B+’ with a ‘Stable Outlook’. Uzbekhydroenergo has previously announced its intention to list eurobonds on the London Stock Exchange in the near future, and the assignment of the rating will be viewed as a key step towards completing that process.

Global remittances plunge, with emerging Europe and Central Asia the hardest hit regions
EU minimum wage proposal should make sure workers in the east ‘get their fair share’
Comment