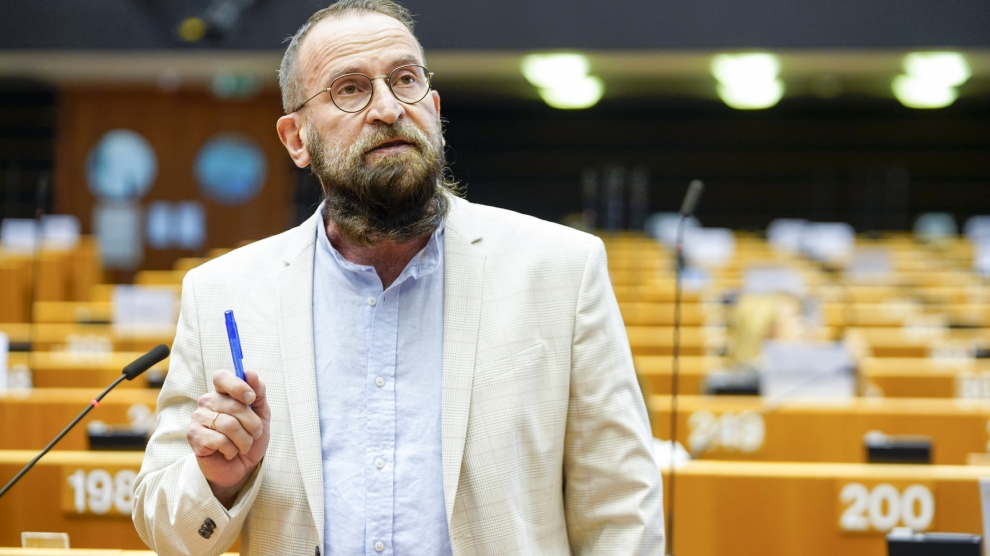 An MEP from Hungary’s ruling Fidesz party, which is hostile to LGBT rights, has quit after he was caught attending what Belgian media describe as a “gay sex party” in Brussels. The MEP, József Szájer (pictured above), initially pleaded parliamentary immunity but is now under investigation for both non-compliance with measures relating to the Covid-19 pandemic and violation of drug laws. Szájer has previously boasted that he personally drafted changes to the Hungarian constitution that defined marriage as being between a man and a woman.

The Hungarian prime minister’s chief of staff has warned the European Union that its budget proposals are still not acceptable in their current form, and says his country is not losing out financially by blocking its approval. Gergely Gulyás, Viktor Orbán’s chief of staff, told reporters on Thursday that, if changes aren’t made, Hungary will once again veto the EU budget and the recovery fund at next week’s EU summit. Hungary and Poland have been at odds with the EU over the inclusion of rule-of-law criteria in the bloc’s next seven-year budget. The move would make access to European funding conditional on whether governments of member states were seen adhering to the rule of law in their own countries.

With long-term budget negotiations still ongoing, the European Commission this week disbursed 8.5 billion euros of financial support in the form of loans granted on favourable terms, to assist member states address sudden increases in public expenditure as a result of the Covid-19 pandemic. Three states in emerging Europe were among the recipients of this latest tranche of funding: Hungary (200 million euros), Romania (three billion euros) and Slovakia (300 million euros). Specifically, the funds help cover the costs directly related to the financing of national short-time work schemes, and other similar measures they have put in place as a response to the coronavirus pandemic, including for the self-employed.

The European Investment Bank (EIB) this week agreed a loan of five billion crowns (equivalent to 190 million euros) with ČEPS, the state-owned Czech transmission system operator. The investment aims at strengthening the electricity transmission infrastructure of Czechia. The project will improve the security of the electricity system and facilitate power exchanges and transit flows mainly from Germany to Austria through Poland and Czechia. As an EU Project of Common Interest, it will also enhance the integration of renewables in the network.

Czechia said on Wednesday it would add a diplomatic presence to its Jerusalem office next year in what the foreign ministry called a move to boost services for Czech citizens in Israel and not a new embassy. The country has long been one of Israel’s steadiest supporters in the European Union and its president, Miloš Zeman, has backed the idea of relocating the Czech embassy to Jerusalem from Tel Aviv. However no steps have been taken.

A face mask equipped with a sensor that detects Covid-19 particles in the surroundings, designed by a Romanian engineer, has scooped the top prize at a contest from MIT Media Lab. Burzo Ciprian’s award-winning design, ‘social mask’, is a minimalist, transparent mask featuring a biosensor that can connect to a smartphone. Via an app, users would be able to track the number of surrounding air-borne pathogens, collecting data that also maps other users around you and calculates the risk of infection with Covid-19. The design, which is still a prototype under development, won a competition by MIT’s pandemic response lab that asked engineers and designers to come up with creative responses that reimagine face coverings and personal protective equipment (PPE).

Azerbaijani forces on Tuesday moved into the final district given up by Armenia in a peace deal that ended weeks of fighting over the disputed Nagorno-Karabakh region. Azerbaijan’s defence ministry released a video showing a tank flying an Azerbaijani flag leading a column of trucks into the Lachin district. AFP journalists in Lachin saw a column of Azerbaijani trucks flanked by military vehicles from Russia, which brokered the peace settlement. Armenia agreed to hand over three districts around Karabakh – Aghdam, Lachin and Kalbajar – as part of the deal that stopped an Azerbaijani offensive that had reclaimed swathes of territory lost to Armenian separatists in a 1990s war.

Police in Belarus detained 313 people during the latest demonstrations against President Alexander Lukashenko. Thousands attended protests in the capital, Minsk, and other cities, which have rocked Belarus since Lukashenko’s disputed re-election in August. Opposition supporters and the European Union have refused to recognise the result, saying the vote was rigged. Last Sunday, police once again deployed tear gas and stun grenades to break up some of the crowds, according to the Viasna human rights centre. Opposition leader Svetlana Tikhanovskaya has meanwhile again urged the EU to impose “decisive” sanctions against the Lukashenko regime.

Thousands of supporters of Moldova’s incoming president Maia Sandu protested on Thursday against a move by parliament to strip her of control of the intelligence service weeks before she takes office. Sandu, a former World Bank economist who favours closer ties with the European Union, defeated the pro-Moscow incumbent Igor Dodon in last month’s presidential election, but parliament is still dominated by Socialist party lawmakers aligned with Dodon. Sandu described the move to strip her office of control of the Information and Security Service as “an attempt to usurp power” and hobble her presidency.

Estonia and Latvia’s planned 1GW cross-border offshore wind project will be put out to auction in 2026, it was revealed this week. The location of the first-of-its kind project will be decided next year, once a feasibility study has been completed, said Timo Tatar, Estonia’s deputy secretary-general for energy. Tatar added that not only will the project connect with both Estonia and Latvia, but might also handle the output from other nearby offshore wind farms.

The Lithuanian government meanwhile this week approved a draft resolution that would lead to the Port of Klaipėda being upgraded to accommodate facilities supporting offshore wind projects. The resolution will create the necessary conditions for Klaipėda State Seaport Authority to invest in port infrastructure, which would be used for the production, assembly and storage of wind turbine parts and other components. The investment will also lead to creation of new jobs, according to the government. Some 483 million euros are planned to be invested into expansion of the port from 2021 to 2024, with co-financing from EU structural funds. Most of this investment will be poured into construction and reconstruction projects of the quays and dredging works.

The normalisation of relations between Serbia and Kosovo and the situation in Bosnia and Herzegovina are the two most important challenges in the Western Balkans, the EU Special Representative for the Western Balkans said this week. Speaking on the 25th anniversary of the Dayton Agreement that ended the war in Bosnia, Miroslav Lajčák, a Slovak, said the EU’s task is to help overcome the legacy and hardships of the war. “Bosnia and Herzegovina applied for EU membership in 2016 and the time has come to move from the Dayton to Brussels”, he said.

The International Monetary Fund (IMF) said it expects Albania’s economy to decline 7.5 per cent this year due to the Covid-19 pandemic and the consequences of the 2019 earthquake. The projection is subject to major uncertainty with downside risks due to the increasing number of new Covid-19 cases in Albania, the IMF said in report published on Monday. “A more severe pandemic would further dampen Albania’s economic outlook, through weaker tourism, remittances, external demand, and FDI, as well as tighter financial conditions,” the Fund said. Albania also faces other challenges such as increased public debt, large rollover needs, growing fiscal risks and a relatively high level of non-performing loans (NPLs), according to the IMF.

Montenegro will follow through with its decision to expel the Serbian ambassador, the country’s foreign ministry confirmed this week, despite a call from the European Union to reverse it. Just days before the inauguration of a new, broadly pro-Serbian government, Montenegro´s outgoing cabinet last weekend proclaimed the Serbian diplomat persona non grata, citing his “long and continuous meddling in the internal affairs of Montenegro.” Serbia initially reacted by ordering the Montenegrin ambassador to leave the country, but on Sunday went back on its decision.

A court in the United Kingdom has frozen up to five billion US dollars in assets tied to the alleged theft of billions of dollars from Kazakhstan’s BTA Bank. According to The Wall Street Journal (WSJ), the Enterprise and Property Courts of England and Wales ordered the freezing of stakes in luxurious inns, money in financial institution accounts in six countries, and a Burger King franchise in Kazakhstan. The WSJ report says the ruling was based mostly on a petition from the state-owned BTA Bank, which has alleged for years that its former chairman, Mukhtar Ablyazov, an outspoken critic of the Kazakh government, stole more than six billion US dollars.

The World Bank this week approved six million US dollars in additional financing for a project aimed at improving public finance management in Tajikistan. The investment will strengthen the efficiency, accountability, and transparency of public expenditure, especially critical in the current Covid-19 context. “A strong public financial management system underpins a government’s ability to provide quality services to citizens and channel resources efficiently and effectively to priority needs, such as health, education, and poverty reduction,” said Jan-Peter Olters, World Bank country manager for Tajikistan.

Uzbekistan has reportedly signed a deal with a Maltese company, Melabis, to grow and produce medical cannabis. Melabis will grow the plants on 3,000 hectares of farmland in the Sardoba district of Sirdaryo Province, Uzbek media reported this week, citing the regional government. It marks the first such deal for Uzbekistan, where the drug is prohibited, despite regular calls for its legalisation.

A new political group in Kyrgyzstan, Committee-93, has called for the country to return to its constitution from 1993 amid protests against a controversial proposal by the interim government to change the current constitution. The new group held its first session in Bishkek on November 30 at which its members criticised a proposal to change the constitution pushed by Sadyr Japarov, who was named as the country’s new prime minister and handed presidential powers in mid-October amid protests against the official results of parliamentary elections that ousted the government and led to the resignation of President Sooronbai Jeenbekov. The group says that a return to the constitution of 1993 would help ensure a more independent judicial system and parliament.