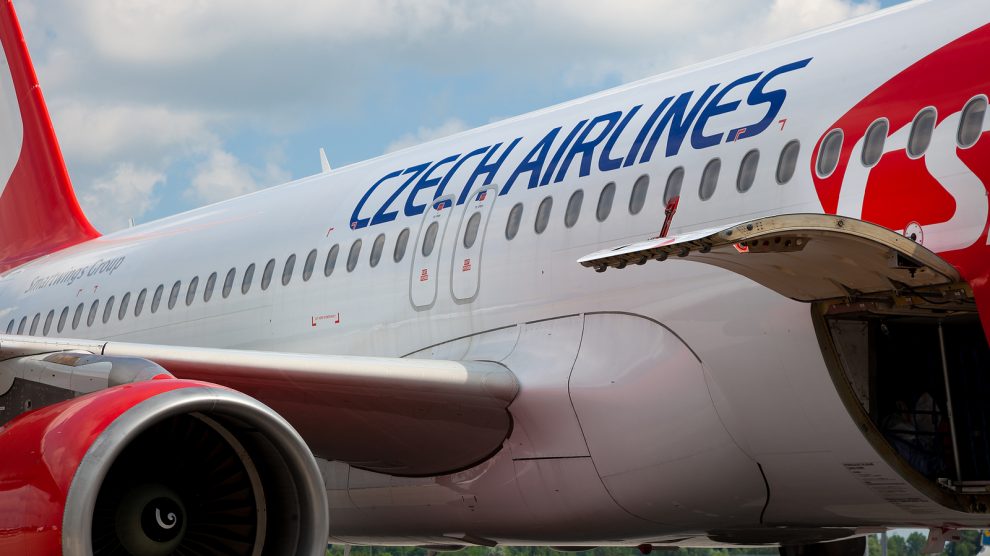 Polish parcel locker firm InPost this week agreed a deal to buy French logistics giant Mondial Relay for 565 million euros. The transaction, which will be funded by new debt, will add about 16,000 pick-up points in France, Benelux, Spain and Portugal to InPost’s network of automated lockers and boost its profits by 100-150 million euros in the medium term, InPost said in a statement on Monday. InPost more than doubled its revenue in 2020, with profit rising by 184 per cent on the back of the surge in online shopping driven by the Covid-19 pandemic.

Czech Airlines – the fifth oldest airline in the world – was this week declared bankrupt by a court in Prague, although the flag carrier continues to operate a reduced schedule pending a final decision on its status. The airline has debts of around 70 million euros, which includes money owed for cancelled flights to more than 230,000 passengers. The firm has complained that unlike its foreign rivals it has not received any Covid-19 aid from the Czech government, which has so far shown little willingness to bail out the national carrier, founded in 1923.

Slovakia’s government this week banned its citizens from leaving the country for holidays in a new move to slow the coronavirus pandemic. The government said foreign travel would still be allowed for work and other non-leisure purposes, and the ban was an extension of restrictions on internal movement under which people cannot leave their districts without a valid reason. The order is motivated by fears of dangerous virus mutations from abroad. The country’s prime minister, Igor Matovič, is facing increasing pressure to step down over his handling of the pandemic. The Freedom and Solidarity party, one of four members of the ruling coalition, has said it will leave the government unless Mr Matovič resigns.

Bulgarian health authorities meanwhile this week said that they would not impose any new lockdown measures because people do not want them. “We are not ready for a new lockdown, not because it is medically unjustified, but because people are not ready,” said health Minister Kostadin Angelov. “There is no way to introduce measures where people do not believe in those measures.” Bulgaria is currently recording almost 4,000 new cases of Covid-19 each day, and its health service is at breaking point. The country is also scheduled to vote in a parliamentary election on April 4.

The coach of Croatian football champions Dinamo Zagreb resigned this week after receiving a five year prison sentence for fraud. Zoran Mamić and his brother Zdravko were handed jail sentences in 2018 after being found guilty of siphoning off millions of euros in transfer fees from Dinamo. An appeal to Croatia’s supreme court saw the length of the sentence reduced by three months but the pair will still have to serve four years and eight months in jail.

The Czech Film Fund confirmed this week that Netflix is set to shoot a new film, The Gray Man, in Prague and other locations in Czechia this spring. The film, reportedly costing 200 million US dollars, is the streaming giant’s most expensive production to date, and will be directed by Anthony and Joe Russo. The thriller, set to star Ryan Gosling and Chris Evans, centres around a deadly duel between two killers connected to the CIA, and is based on a best-selling book series written by Mark Greaney.

Armenia’s embattled prime minister, Nikol Pashinyan, on Thursday announced snap elections in a bid to defuse a political crisis that has shaken the country since last year’s military defeat to Azerbaijan. Pashinyan has faced calls to resign since November when he signed a peace deal brokered by Russia that ended weeks of fighting for control of the disputed Nagorno-Karabakh region. “Snap parliamentary elections will be held on June 20,” Pashinyan wrote on Facebook. He said the decision was taken after talks with members of the opposition and President Armen Sarkisian, who has also called for Pashinyan to resign.

Moldova’s parliament on Thursday nominated the country’s ambassador to Russia, Vladimir Golovatiuc, as prime minister, in a direct challenge to President Maia Sandu. The move is likely to prolong a row between Sandu, who became president in November, and a parliament still dominated by lawmakers aligned with her predecessor, Igor Dodon. Sandu has previously accused parliament of trying to sabotage her leadership and is pushing to hold an early parliamentary election, which she says is needed to give her more power to fight corruption and tackle the Covid-19 pandemic.

Belarusian opposition leader Svetlana Tikhanovskaya this week called on the United States to put more pressure on authoritarian leader Alexander Lukashenko by expanding sanctions to bring maximum pressure on the Belarusian regime and force it to answer the opposition’s calls for dialogue. Speaking on Wednesday to the US House of Representatives’ Foreign Affairs Committee, Tikhanovskaya  said the additional sanctions should target judges, state-owned enterprises, security officers, oligarchs, and educational and sports officials. This includes oil and gas enterprises, she said, urging Congress to “strike at the regime’s most important benefactors and primary sources of resilience.”

Foreign ministers of the G7 (Canada, France, Germany, Italy, Japan, the United Kingdom and the United States) on Thursday issued new condemnation of Russia’s continued actions to undermine Ukraine’s sovereignty, territorial integrity and independence. In a joint statement released on the seventh anniversary of Russia’s invasion of Crimea, the seven ministers said: “We unequivocally denounce Russia’s temporary occupation of the Autonomous Republic of Crimea and the city of Sevastopol. Russia’s attempts to legitimise it are not, and will not, be recognised.”

The prime ministers of the Baltic states have again called on the European Union to speed up the supply of vaccines for countries with a higher need and greater vaccine capacity. In a joint statement on Tuesday, Estonian Prime Minister Kaja Kallas, Lithuanian Prime Minister Ingrida Šimonytė, and Latvian Prime Minister Krišjānis Kariņš said that joint procurement of vaccines in the European Union was very important for small countries. “The efforts of the European Commission to coordinate the whole pandemic, and in particular the negotiations with vaccine manufacturers, are crucial. Unfortunately, the current uncertainty of delivery schedules affects the entire course of vaccination and shakes confidence,” said Kallas. Estonia currently has the highest per capita Covid-19 infection rate in the world.

The Estonian government this week announced an aid package worth 42 million euros for the country’s cultural sector. The decision comes after 355 organisations from across the sector submitted a joint proposal to the government, emphasising the impact culture has on the economy and the population’s mental health, and underscoring its need for financial support. The funds include 21 million euros to help cultural events organisers (such as promoters) cover the costs of labour, as well as other unavoidable costs. Money will also be allocated to support cinemas, film production and film distributors, freelance creatives, and sports.

In Lithuania meanwhile, restaurant and hotel staff on Tuesday set up tables and beds in public squares across the country, urging the government to provide more support to the pandemic-hit hospitality industry. Menus were replaced with signs saying “Last Supper”, tables were covered with black tablecloths and funeral wreaths were laid by hotels beds in front of the government building in the capital Vilnius. Similar demonstrations were held in other cities. “The whole hospitality sector – restaurants, bars and especially hotels – is going through very difficult times and we need much more support from our government,” Juozas Vainora, a hotel employee, told the AFP news agency.

Kosovo this week officially opened an embassy in the city of Jerusalem, the first European and Muslim-majority country to do so. The event was marked with a brief ceremony during which the flag of Kosovo was raised in front of the building that now serves as its embassy. The opening of the embassy follows a landmark agreement between Kosovo and Israel to establish diplomatic relations. Israel, previously a notable holdout, recognised Kosovo’s independence in September last year.

Serbia’s state-owned gas firm Srbijagas announced this week that it had signed an agreement with Bosnia and Herzegovina gas distributor Gas-Res to build a 410 kilometre gas pipeline linking the two countries. The pipeline will run from Indjija in northern Serbia to Novi Grad in Bosnia and Herzegovina, passing through the Republika Srpksa, one of two politically autonomous regions in Bosnia and Herzegovina. It will carry up to 1.2 billion cubic metres of gas each year. The project’s main purpose is to provide Bosnia and Herzegovina with access to gas supplies arriving in Serbia via Balkan Stream, an extension of Russia’s TurkStream pipeline that passes through Bulgaria and Serbia and ends in Hungary.

The European Union’s border agency, Frontex, has renewed its agreement with non EU-member Albania to strengthen cooperation in border management, fighting cross-border crime, and returning migrants who enter the country illegally. The renewed deal, signed online Wednesday due to the pandemic, comes two years after Albania became the first non-EU country to deploy Frontex officers. Similar agreements have since been signed with North Macedonia, Kosovo, Serbia, Bosnia and Herzegovina and Montenegro.

Uzbekistan this week received its first batch of Covid-19 vaccines, 660,000 doses delivered via the COVAX facility,  a worldwide solidarity programme aiming at providing fair and equitable access to vaccines all over the world. In total, the COVAX programme will deliver 2.2 million doses to Uzbekistan, enough to vaccinate a quarter of those on the country’s priority list, including health care workers and elderly people at risk.

Across Central Asia, however, there is growing concern that many people have long since dropped their guard against the Covid-19 emergency. Eurasianet reported this week that in Uzbekistan, the health ministry registered 111 new cases on March 14 – the highest one-day total since late December. Two days later, it reported 115 cases. The authorities have likely been undercounting substantially since the crisis began, so those figures are only indicative.

It is a similar story in Kazakhstan. Officials there confirmed 1,082 known fresh Covid-19 infections on March 17. The trend shows a clear worsening of the situation. The average for the one-week period from March 11 was 964 daily cases. The week before it was 731.

Kyrgyzstan appears less flustered. It is not reporting any major uptick in cases, although its record of being able to provide reliable data is weak. But while Uzbekistan and Kazakhstan have initiated vaccination programs, Kyrgyzstan is weeks away from reaching that point.

Turkmenistan and Tajikistan meanwhile claim to have thwarted the virus altogether, but their claims are underpinned by little more than systematic deception.

A Romanian Yellowstone: Elsewhere in emerging Europe
Despite Brexit and Covid-19, UK-CEE relations will flourish
Comment