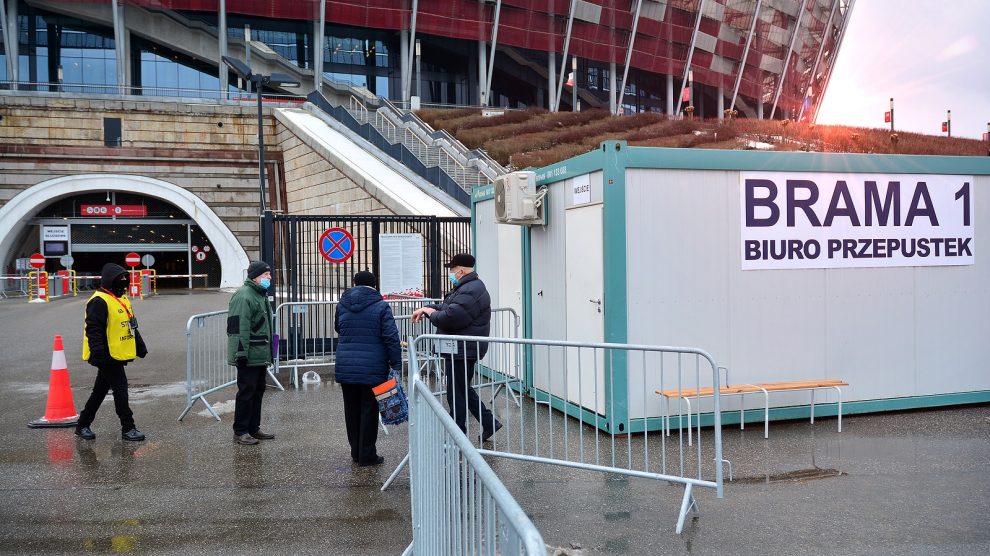 Slovakia’s Foreign and European Affairs Minister Ivan Korčok, and Branislav Gröhling, the education minister, announced their resignations on Wednesday, piling further pressure on the country’s prime minister, Igor Matovič. The latest resignations bring to six the total number of ministers who have left the cabinet over the past two weeks. Opposition parties, as well as members of the ruling four-party coalition, have accused Matovič of mishandling the coronavirus pandemic. On Tuesday, Slovakia’s president, Zuzana Čaputová, called on the prime minister to resign.

Poland’s government this week ordered stricter pandemic measures for the two-week period surrounding Easter in a new attempt to limit human contact amid a deadly surge in the Covid-19 pandemic. The country’s health ministry said on Thursday it recorded more than 34,000 new daily cases – a record – and 520 deaths. “We are one step away from crossing the point beyond which we will not be able to properly heal our citizens,” said the country’s prime minister, Mateusz Morawiecki. “We will do everything to avoid such a scenario.”

Hungary’s planned reopening of schools and kindergartens on April 7 now appears “optimistic”, Zoltán Maruzsa, a state secretary in charge of education, said in a newspaper interview published on Thursday. Hungary recorded 240 deaths on March 25, the highest number since the beginning of the pandemic. “We can rule out that the entire school year will be spent in remote learning. However, it takes some degree of optimism to take the April 7 reopening for granted,” Maruzsa told the Magyar Nemzet newspaper.

Bulgarian Prime Minister Boyko Borissov this week told Russia to stop spying in his country. His comments came after prosecutors said they had charged six people on charges of working as spies for Moscow. Prosecutors said last weekend that members of the alleged spy ring, who included former and current military intelligence officers, had passed classified information about Bulgaria, NATO and the EU to an official at the Russian embassy in Sofia. Over the last 18 months, Bulgaria has expelled six Russian diplomats, including a military attache, over suspected spying.

Deutsche Telekom and its Slovak unit on Thursday lost their fight against an antitrust fine levied nearly a decade ago by the European Union after European Court of Justice endorsed the sanctions. The two companies were given a joint fine of 38.8 million euros and Deutsche Telekom an additional 31 million euros penalty by the European Commission in 2014 for charging unfair wholesale prices over a five-ear period.

Croatian electric supercar maker Rimac Automobili announced this week that it is opening a new research and development office in the UK. Based in Warwick Enterprise Park, the R&D office plans to employ 30 people by the end of 2021, Rimac said in a statement on Tuesday. “While we are starting with a small office, we might expand significantly in the years to come, working on Rimac’s future projects, while closely collaborating with our team of engineers, designers and technicians back in Croatia,” said Mate Rimac, founder and CEO of Rimac. Rimac has already provided electrified technology to a number of British automotive brands such as Aston Martin and Jaguar Land Rover, the company said. It is also a supplier to global car makers, including Hyundai, Porsche, Automobili Pininfarina and Koenigsegg.

Romanian carmaker Dacia meanwhile revealed this week that its first electric car, touted as the cheapest in Europe, will be available in Germany for under 11,000 euros. The list price of the basic model will be 20,490 euros, but the German government provides a 9,570 euros grant for the purchase of electric cars. In Romania, the price is even cheaper, starting at 18,100 euros, reduced to 7,700 euros with a government grant. Dacia said that it received more than 1,500 orders for the car in Romania in the first four hours after it made applications available, on March 20. Just 2,900 electric cars were sold in Romania during the whole of 2020.

Ukraine reported a record daily number of coronavirus-related deaths for the second consecutive day on Wednesday, as the health ministry sought to ease public concerns over the safety of vaccines. Ukraine also recorded a record number of hospitalisations as the more transmissible British strain of the virus sweeps through the country. Health Minister Maksym Stepanov said there were 342 deaths over the past 24 hours, up from 333 in the previous 24 hours, taking the overall Covid-19 death toll to 30,773. Stepanov said 14,174 new infections were reported, increasing total cases to around 1.6 million.

Armenian Prime Minister Nikol Pashinyan has come under criticism for what the country’s opposition claims are lies and contradictory statements about why the Armenian military did not deploy fighter jets purchased from Russia during last year’s war with Azerbaijan over Nagorno-Karabakh. Pashinyan told parliament on March 24 that he saw no contradiction between his comments about why Armenia did not purchase missiles for its Russian Su-30SM fighter jets and his prewar statement on social media about the aircraft “successfully testing missiles.” Pashinyan said at a rally last weekend that Yerevan purchased Russian Su-30SM fighters in May 2020 but did not manage to purchase missiles for them before the start of the 44-day war, in which its forces were defeated by Azerbaijan.

Top US and EU diplomats say they have agreed to coordinate their response to Moscow’s “challenging” behaviour such as its “ongoing aggression” against Ukraine and Georgia, as well as the “dwindling respect” in Russia for human rights and the rule of law. In a joint statement issued on March 24 following talks in Brussels, US Secretary of State Antony Blinken and EU High Representative for Foreign Affairs Josep Borrell, said they were determined to address, in a coordinated manner, Russia’s “hybrid threats, such as disinformation; interference in electoral processes; malicious cyber activities; and military posturing.” The two also “decided to coordinate their response to the shrinking space in Russia for independent political voices, civil society, and media freedom.”

A Lithuanian MP this week suggested expanding the country’s so-called Magnitsky Act which bars foreigners linked to corruption and human rights abuses from entering Lithuania. Žygimantas Pavilionis, chairman of the Lithuanian parliament’s foreign affairs committee, says the law should also apply to individuals who actively support or take part in any activity by a foreign state that violates international law. Pavilionis says his proposed changes would boost the fight against disinformation campaigns. The Magnitsky Act, introduced in 2017, was named after the Russian lawyer Sergei Magnitsky who died in a Russian prison in 2009 after exposing a corruption scheme that let Russian officials and citizens embezzle 230 million US dollars of taxpayer money.

Estonia is planning to start issuing digital vaccination certificates in April, an official from the social affairs ministry said on Wednesday. “We are planning to have our certificates ready in April together with our partner Guardtime,” said Kalle Killar, undersecretary for e-health and innovation at the ministry. Killar said the digital certificates would help people both for travelling and in their everyday life and would be both easier to verify and more secure than paper certificates. Meanwhile, Estonia’s prime minister, Kaja Kallas, resumed duties on Thursday’s after having taken a week-long leave of absence after being tested positive for Covid-19.

International credit rating agency Fitch Ratings affirmed Latvia’s credit rating at the ‘A-‘ level with a stable credit rating outlook, the ministry of finance said March 23. In its latest rating update, Fitch said: “Latvia’s ratings are supported by a credible policy framework, underpinned by EU membership and the benefits of eurozone reserve-currency flexibility, as well as government debt levels materially below the median of ‘A’ rated category peers. These factors are balanced by a lower income level, and higher GDP volatility and net external debt than peers.”

American veterans of Kosovo’s war against Serbia between 1998 and 1999 have written to US President Joe Biden urging him to uproot a Europe-based war crimes tribunal that recently indicted Kosovo’s president, Hashim Thaçi, from the Netherlands and move it to Kosovo. In a letter to Biden dated March 24, Gani Shehu, a former commander with the Kosovo Liberation Army (KLA), argues that the Kosovo Specialist Chambers, which is probing atrocities during the conflict, is being used by European nations to undermine Kosovo’s relationship with the US.

On Monday, Kosovo’s parliament backed Albin Kurti as prime minister, more than a month after the country held a snap election. Kurti, whose coalition secured 67 votes in the 120-seat parliament, said his main priorities will be the fight against corruption and the creation of jobs in a country with the youngest population in Europe and unemployment of around 30 per cent.

The Russian Direct Investment Fund, Russia’s sovereign wealth fund, this week agreed a deal with Serbia’s  Institute of Virology and Vaccines to produce the Sputnik V Covid-19 vaccine in Serbia. Serbia will become the first country in South East Europe to produce Sputnik V. The vaccine could be exported to other countries of the region at a later stage. Production is due to start in May.

The United States has provided 29 new Humvees to bolster Albania’s military capabilities ahead of military exercises in South East Europe, the country’s defence ministry said on Wednesday. US Ambassador Yuri Kim said the vehicles were part of a “priority project for the United States – to assist in the transition of Albania’s 2nd infantry battalion from a light infantry battle group to a motorised infantry battle group” Albania, a NATO member, will use the Humvees while hosting parts of multinational exercises this summer that are being planned as the largest training drills ever held in southeast Europe and which “will certainly showcase Albania’s importance in the region,” added Kim.

The World Health Organisation (WHO) this week reported an outbreak of polio in Tajikistan. The WHO said that as of March 18, four paralytic cases of children infected with circulating vaccine-derived poliovirus type 2 have been reported in the country, with several cVDPV2 cases detected in community and close contacts. It added that a thorough investigation is underway including visits to hospitals, contact tracing and review of subnational vaccine coverage data.

А British coroner has concluded that Aisultan Nazarbaev, a grandson of former Kazakh President Nursultan Nazarbaev, died of natural causes last year, as a result of a cocaine addiction. The finding, announced March 24, was expected to end persistent suspicions about the circumstances leading up to his death. He was found unconscious in a London park on August 16, 2020. Nazarbaev had battled addiction for some years. He had also made several public accusations of corruption against his family, which had raised suspicions that his death might be the result of foul play.

The Ethical Trading Initiative (ETI) is urging fashion brands to stop sourcing cotton from Turkmenistan after a new report revealed the systematic use of forced labour in last year’s harvest. Two NGOs, Turkmen.news and the Turkmen Initiative for Human Rights, are behind the study which is based on monitoring by their staff of the 2020 cotton harvest in four of the country’s five regions – Ahal, Dashoguz, Lebap, and Mary. It claims that public sector employees, conscripts and students in higher education, colleges and vocational schools were all forced to pick cotton in all four regions.

Revitalising Ukraine’s defence sector, and with it, its military
In Belarus, a new push for freedom
Comment