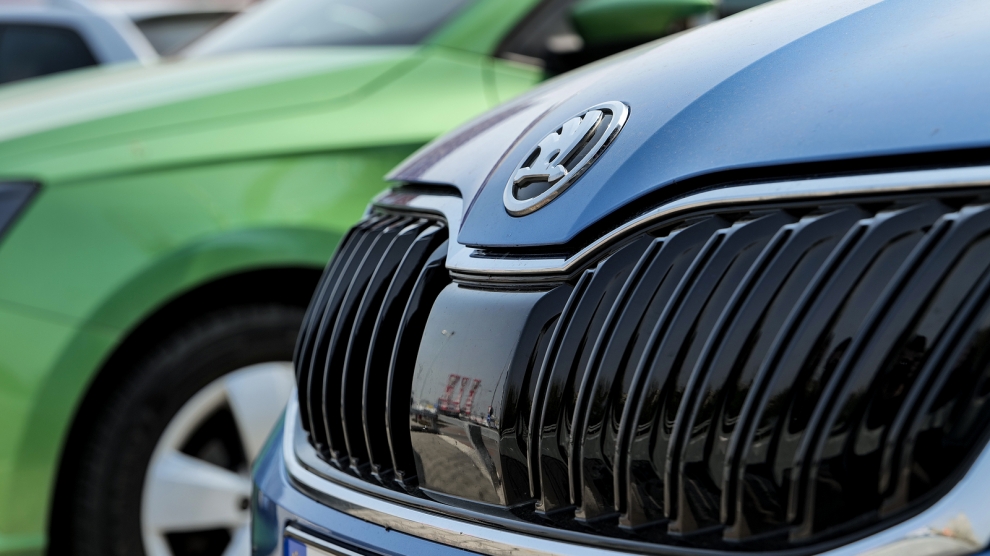 Bernhard Maier, chairman of Czech carmaker Skoda Auto, part of the Volkswagen Group, will leave his post at the end of July after nearly five years, the company said on Thursday. Skoda, which did not give a reason for Maier’s departure, said a successor would be elected by the board in August. The car group is Czechia’s biggest exporter and a bellwether for the economy, which faces a steep drop in 2020 due to the coronavirus pandemic. Skoda sold 1.24 million cars in 2019.

Slovakia is aiming to secure further investments from Volkswagen to expand production at the company’s Bratislava plant after the German carmaker backed away from a new site in Turkey, Prime Minister Igor Matovič said on Wednesday. Mr Matovič told reporters in a televised briefing the government was in talks with Volkswagen as well as with several groups as it sought investments and the creation of “thousands” of jobs.

The leader of Poland’s ruling party, Jarosław Kaczyński, on Thursday accused the foreign media – in particular in Germany – of repeatedly meddling in Sunday’s presidential election. Poland is gearing up for a close vote in the election pitting President Andrzej Duda, an ally of the ruling Law and Justice (PiS) party, against centrist Warsaw mayor Rafał Trzaskowski. The comments by the PiS leader Kaczynski, come after Duda slammed a German-owned tabloid newspaper last week for reporting on a pardon that he granted to a man who had served his sentence in a paedophilia case. On Wednesday, Poland’s foreign ministry summoned a German charge d’affaires over a series of articles published in the German press. Mr Duda has repeatedly criticised the foreign press during the campaign.

Romania’s finance ministry sold a less than planned 205 million lei (42.3 million euros) of new 2030 treasury bonds at an average accepted yield of 4.26 per cent on Thursday. Debt managers had planned to sell 300 million lei of the paper. In June they sold 2031 bonds at an average 4.22 per cent yield. So far this year, Romania has sold 43.2 billion lei of local currency bills and bonds as well as 150 million euros worth of euro-denominated paper, and tapped foreign markets for 6.3 billion euros worth of eurobonds. It also sold 10-year dollar-denominated bonds worth 1.3 billion US dollars and two billion US dollars worth of 30-year bonds on the external market earlier this week.

Prosecutors raided the offices of two of Bulgarian President Rumen Radev’s staff on Thursday as part of investigations, prompting thousands to take to the streets of Sofia later in protest at their action. Many protesters saw the raids as an attack on the head of state and accused prosecutors of deliberately delaying probes into the country’s graft-prone political elites and local oligarchs. Mr Radev last year tried to block the appointment of the chief prosecutor Ivan Geshev, amid popular protests that Mr Geshev would do little to tackle high-level corruption in Bulgaria

Slovenian pharmaceuticals producer Krka said on Thursday its consolidated net profit rose 15 per cent on the year to 160.3 million euros in the first half of 2020. Consolidated sales revenue increased by an annual six per cent to 803.8 million euros in January-June, with 95 per cent of the total coming from sales abroad, Krka said in a statement on the group’s preliminary operating results for the six-month period. “Sales volume amounted to eight billion units (tablets, capsules, injections, etc.), an eight per cent increase over the same period last year,” the company said.

Elsewhere in Slovenia, a wooden sculpture of US First Lady Melania Trump is reported to have been set on fire near her hometown of Sevnica, prompting its removal. Brad Downey, the American artist who commissioned the statue, said it was targeted on July 4, Independence Day in the US. The Berlin-based artist arranged for the charred statue to be removed the next day. Police told the Reuters news agency they had launched an investigation.

The European Investment Bank Group and Bank of Georgia have signed a guarantee agreement of up to 60 million euros, backed by the InnovFin SME Guarantee Facility. The InnovFin Guarantee covers 50 per cent of every loan disbursed by the Bank of Georgia and targets small and medium-sized enterprises and mid-caps that require investment and working capital to finance research, development and innovation activities. Furthermore, as a response to the Covid-19 pandemic, the guarantee also covers 80 per cent of loans provided by Bank of Georgia to SMEs and mid-caps impacted by the coronavirus crisis for their working capital needs.

A property tax rise in Armenia risks forcing elderly people from homes they have lived in since the Soviet era and which have risen dramatically in value since then, critics have warned. The reform was signed into law this week and will bring thousands of homes that were previously exempt because of low historic valuations into the tax system. But critics including the Armenian president, Armen Sarkissian, say the hike penalises older people who are not rich but took ownership of apartments in the centre of the capital Yerevan when the country moved from Communism to a private property system.

Facebook said it has taken down a network of “coordinated, inauthentic” Ukrainian social media pages tied to a digital advertising agency in the nation’s capital as it seeks to combat the spread of disinformation. The social media giant said in a July 8 statement that the Ukrainian network aimed its work at a domestic audience and was “particularly active” during the nation’s 2019 presidential and parliamentary elections. Facebook tied the inauthentic activity to Postmen DA, whose clients have included the European Union Advisory Mission, Ukraine’s Anti-Corruption Bureau, and DTEK, an energy company owned by Rinat Akhmetov, Ukraine’s richest man.

Moldova’s government said it aims to obtain 550 million US dollars under a new three-year programme currently being negotiated with the International Monetary Fund (IMF). The funds would be used for fiscal support and to top up Moldova’s foreign exchange reserves, the government said this week. “Financial support from the IMF is essential for the Republic of Moldova, whose economy has clearly been affected by the COVID-19 pandemic. We are ready to discuss and fulfil the important points provided in the financing agreement and to continue the collaboration, all the more since the last program with the IMF was successfully fulfilled,” said Prime Minister Ion Chicu.

The Defence Ministry of Azerbaijan on Monday denied allowing another country – presumably Israel or the United States – to use its airspace to carry out attacks on Iran. “Information about Russia’s ‘Container’ radar system detecting unknown planes using Azerbaijan’s air space to carry out attacks on Iran is an absolute lie,” the defence ministry said in a statement. “The dissemination of such information is aimed at undermining the Azerbaijani-Iranian relations.” The Azerbaijani ministry also stressed that Azerbaijan has never taken any steps against Iran and “will not do so in the future”.

Lithuania has suspended Russian television network RT from broadcasting in its territory because of RT’s links with the head of the Russian state TV network, Dmitry Kiselyov, who is under international sanctions. Mantas Martisius, the chairman of Lithuania’s Commission on Radio and Television, said on July 8 that five channels broadcast by RT in the Baltic country will be suspended. “These programmes are being suspended not because of any violations but because a person associated with these programs has been included on the list of individuals under sanctions. And that is Mr Kiselyov, who should not get benefits and therefore the transmission of the programmes is being suspended,” said Mr Martisius.

The European Commission this week approved Latvian plans to set up a fund with a current target size of 100 million euros that will invest through debt and equity instruments in large enterprises active in Latvia affected by the coronavirus outbreak. The scheme was approved under the State Aid Temporary Framework.

Lithuania, Latvia and Estonia are considering slapping a fee on power imports from Russia and Belarus, officials said, as they move towards a full decoupling from the countries’ Soviet-era common power system by 2025. The fee, modelled on Finland-Russia trade, is expected to be part of new rules the Baltic states use to trade with their neighbours following the launch of Belarus’ Astravets nuclear power plant early next year.

Kosovo President Hashim Thaçi will go to The Hague on Monday to be interviewed by international war crimes prosecutors. Thaçi was a leading commander of the Kosovo Liberation Army, which fought a guerrilla war for independence from Serbia in the late 1990s. He announced his appearance on his Facebook page on Wednesday. A special international court has indicted Thaçi and other former fighters for alleged war crimes by the KLA, including murder, kidnapping and torture. Thaçi has denied the charges.

Serbia and Kosovo will meanwhile resume dialogue aimed at the normalisation of relations between the two countries in Brussels on July 12. The meeting, to be hosted by EU High Representative Josep Borrell and facilitated by EU Special Representative for Serbia-Kosovo dialogue, Miroslav Lajčák, will be the first of its kind since November 2018. It will be attended by Kosovo Prime Minister Avdullah Hoti and Serbian President Aleksandar Vučić.

North Macedonia has unveiled a payment card to soften the blow of the coronavirus crisis and entice people to spend millions of free euros on local products, just before voters go to the polls in a national election. The country’s finance minister announced this week that more than 100,000 of the cards are already in circulation loaded with 11 million euros worth of credits to “Buy At Home.” Under the plan, citizens in households earning less than 15,000 denars a month, about the monthly minimum wage, are eligible to receive the payment cards loaded with 9,000 denars in credit.

Albania’s infrastructure ministry said this week that it is now inviting bids in a tender for the construction of a 115 kilometre section of motorway from the country’s northern town of Milot to the southwestern city of Fier, part of the Adriatic–Ionian motorway. The deadline for submission of bids is September 28 and the estimated cost of the project is around 1.2 billion euros, the infrastructure ministry said in a tender notice published by the country’s public procurement agency.