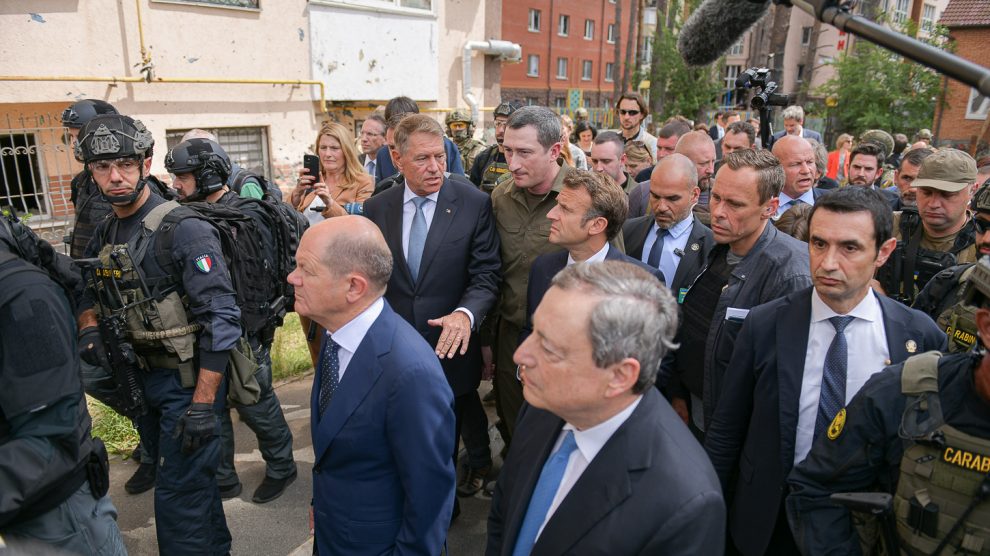 Scholz meanwhile said that the four leaders had travelled to Kyiv not only to show solidarity, “but also assure [Ukraine] that the help that we’re organising – financial, humanitarian, but also, when it comes to weapons – will continue. And that we will continue it as long as it is necessary for Ukraine’s fight to defend itself against Moscow.”

At a joint press conference following their meeting, Macron said that the four EU leaders were in agreement that Ukraine should be given EU candidate status “immediately”. This could now happen as soon as the next meeting of the European Council, set to take place next week.

Ukraine has so far ignored a Russian ultimatum to surrender Sievierodonetsk, with Moscow controlling 80 per cent of the embattled eastern city that has become a focal point of Russia’s advances in the east of the country. Serhai Haidai, Ukraine’s governor of Luhansk, said on Thursday that, “fierce battles are fought for every house”. Thousands of civilians, including women, children and elderly people, are trapped in the city with a diminishing supply of food, clean water, sanitation and electricity.

The United States will provide an additional one billion US dollars in security assistance to Ukraine for its efforts in the eastern Donbas, President Joe Biden told Zelensky during a call on Wednesday. The support package includes “additional artillery and coastal defence weapons, as well as ammunition for the artillery and advanced rocket systems,” Biden said in a statement from the White House after the call.

The US will also provide 225 million US dollars in humanitarian assistance, which Biden said will go toward “supplying safe drinking water, critical medical supplies and health care, food, shelter, and cash for families to purchase essential items”.

Turkey is ready to host a four-way meeting with the United Nations, Russia and Ukraine to organise the export of grain through the Black Sea, Foreign Minister Mevlut Cavusoglu said on Thursday. According to the Turkish foreign minister, the UN has submitted a plan to facilitate exports. “If Russia answers positively, there will be a four-partite meeting in Istanbul,” Cavusoglu said.

Research published this week by the European Council on Foreign Relationships (ECFR) shows that, while Europeans feel great solidarity with Ukraine and support sanctions against Russia, they are split about the long-term goals. They divide between a “Peace” camp that wants the war to end as soon as possible, and a “Justice” camp that believes the more pressing goal is to punish Russia. In all countries, surveyed, apart from Poland, the “Peace” camp is larger than the “Justice” camp.

Albanian Prime Minister Edi Rama said on Wednesday that he doesn’t expect an EU summit next week to clear the way for his country to begin membership talks and placed the blame on Bulgaria. All EU governments agreed back in March 2020 to give Albania and North Macedonia the green light to start membership talks. But negotiations have yet to get underway after Bulgaria insisted it wanted concessions from North Macedonia in bilateral disputes touching on language, history and identity. Although Sofia’s blockade applies only to North Macedonia, the EU has favoured handling the membership bids of Albania and North Macedonia together — so Albania is effectively blocked too.

Bulgarian Prime Minister Kiril Petkov’s centrist coalition government will face a vote of no-confidence brought by the main opposition party on Wednesday, its first since taking power at the end of last year. Petkov and his We Continue the Change party were elected last year on promises to uproot corruption and introduce deep reforms in the European Union’s poorest member state. The uphill battle for rapid changes took its first toll as one of the four parties last week withdrew from the ruling coalition, leaving it with 109 lawmakers in the 240-seat National Assembly.

Serbian President Aleksandar Vučić criticised Tuesday’s European Parliament Committee on Foreign Affairs, AFET, report that urged mutual recognition between Serbia and Kosovo, and also called for Serbia to “urgently align with the EU’s decisions against Russia”. Vučić said that “these people do not respect their own negotiating framework”, which he said only concerned the normalisation of relations between Serbia and its former province. “Mutual recognition is their wish, it is nice that they want it, we don’t want it and, as I said, everyone [should mind] their own business,” Vučić added on Wednesday.

The German government has paved the way to deploy troops with the European Union’s peacekeeping mission in Bosnia for the first time in a decade as concerns mount about instability from the Ukraine war spilling over to the Western Balkans. Government spokesperson Steffen Seibert told journalists at a news conference in Berlin on Wednesday that the cabinet decided to send troops to EUFOR-Althea, which has been active since 2004. Bosnia lies hundreds of kilometres from the fighting in Ukraine, but faces an increasingly assertive Bosnian Serb separatist movement that analysts say has at least tacit support from Moscow.

Poland is close to agreeing to a European Union directive that would implement a minimum corporate tax after the country won guarantees on another part of the global deal. The government in Warsaw is ready to drop its objections as early as at the meeting of EU finance ministers in Luxembourg on June 17, according to people familiar with negotiations. In return, Poland can expect to be granted a additional commitment on the implementation of the other part of the global deal that would make multinational companies pay more tax in the countries where they do business.

A court in Minsk has designated Tut.by Media as “extremist” and banned its operations in Belarus as a crackdown on independent media and journalists continues. The Supreme Court of Belarus said on June 14 that the decision made by the Economic Court of Minsk takes effect immediately. It did not outline the reasons for the court’s decision. Last August, the news outlet tut.by and the media site zerkalo.io – both owned by the parent company Tut.by Media – were blocked by Belarusian authorities. Tut.by was one of the most prominent websites covering a crackdown on protests after a disputed presidential election in August 2020 gave authoritarian ruler Alexander Lukashenko a sixth term in office despite widespread allegations of fraud.

Hungary unexpectedly raised the country’s key interest rate after the forint fell to a record this week. The one-week deposit rate was increased by 50 basis points to 7.25 per cent on Thursday, the second rate increase in three weeks. All economists in a Bloomberg survey expected no change, in line with central bank messaging to try to keep rate increases to 30 basis points a month. The forint hit an all-time low on Monday, dropping through 400 per euro for the first time. Investors dumped the currency after the central bank indicated it wanted to slow its tightening pace despite inflation rising to a 21-year high.

A music festival founded by the father of singer-songwriter Dua Lipa to promote his native Kosovo has led to recriminations for the country after it lost the event to neighbouring Albania. The Sunny Hill Festival made its debut in Kosovo’s capital, Prishtina, in 2018, bringing artists like Miley Cyrus, Calvin Harris, Martin Garrix and Action Bronson to one of Europe’s youngest and poorest nations. British-born Dua Lipa also was a featured headliner. Dukagjin Lipa, the singer’s father and manager, said the festival brought Kosovo priceless publicity, but that “after a long wait, many efforts, requests,” he’d made “a difficult but necessary” decision to move the event to Tirana. He said a political dispute between Kosovo’s ruling party and the one in power in Prishtina prevented organisers from getting permission to put on the festival.