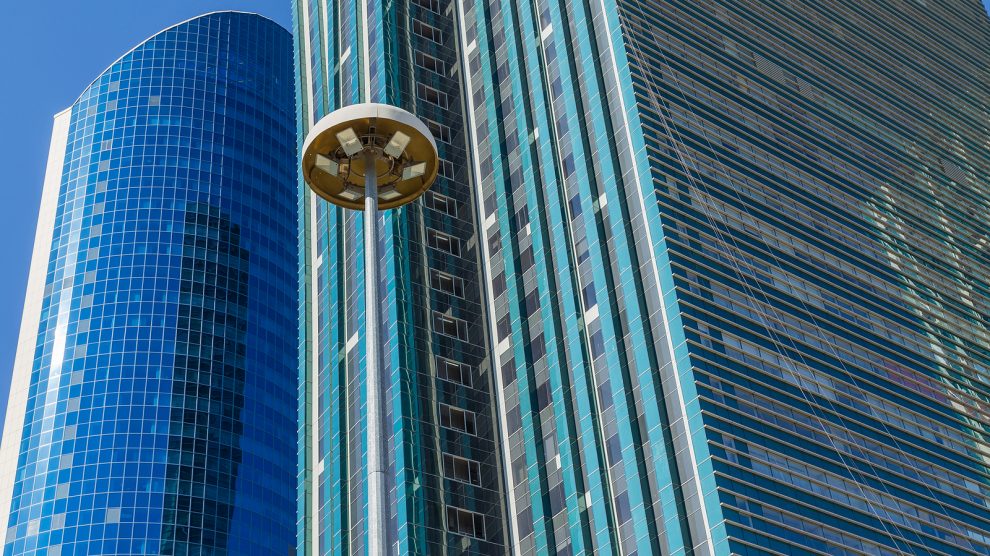 Kazakhstan’s economy, like other countries around the globe, is recovering well from the impacts of the Covid-19 pandemic. The economy grew by four per cent in 2021, although the World Bank expects this to slow in 2022, to 1.5 per cent, mainly because of the fallout from Russia-Ukraine conflict.

Nevertheless, despite quarantine measures and supply chain issues, Kazakhstan’s exports in 2021 grew and are expected to continue to grow throughout 2022.

Trade, one of the main drivers of Kazakhstan’s economic development, accounts for 17.7 per cent of GDP, providing employment for more than 1.4 million people and attracting more investment.

An important area of economic policy reset in Kazakhstan is the denationalisation of the economy. “As part of large-scale reforms and modernisation, new rules of the game are being built in our economy, without obvious monopolies and corruption,” says Akerke Akhmetova, Kazakhstan’s vice minister of justice.

According to Akhmetova, current plans include the privatisation of more than 700 state enterprises, which she says will reduce the presence of the state in the economy and open up new opportunities for both foreign investors and domestic entrepreneurs.

“The government is also focused on reducing the administrative burden on companies,” she tells Emerging Europe.

“By adopting a ‘one in, two out’ approach toward business regulation – which involves introducing one new regulation to replace the need for two previous regulations – the government hopes to simplify regulatory policy and reduce the amount of time that companies need to spend on administrative tasks.”

Akhmetova says that Kazakhstan wants to encourage inflows of investment within priority sectors of the economy, such as services and real estate, both of which saw high rates of growth in 2021.

“At the beginning of 2021, the government introduced investor agreements offering specific benefits, including exemption from corporate income tax (CIT) and land tax for 10 years, exemption from property tax for eight years, and compensation of up to 20 per cent of the costs of construction, installation works, and equipment purchases,” she says.

For added protection, legislation also provides for a 25-year stabilisation clause in case of a legislation change.

Akhmetova, who has been at the justice ministry for more than 22 years, becoming a vice minister in 2019, adds that the work of ministry she represents is crucial to the improvement of the business climate and the inflow of investment.

“We are the coordinators of legislative activity, that is, we participate in achieving the rule of law by ensuring the timely development of laws, including laws on economic growth.”

In this regard, two key areas are intellectual property (IP) rights and international investment arbitration.

“Another improvement was the signing of the Creative Industries Development Concept in 2021, which is expected to increase the creative industries’ contribution to GDP to five per cent, increase the number of creative businesses to 80,000, and increase the share of those employed in the sector to four per cent,” Akhmetova tells us.

When it comes to international investment arbitration, Akhmetova says that Kazakhstan pays special attention to the development of dispute resolution mechanisms.

“We understand that clear and fair dispute resolution mechanisms create the best conditions for domestic and foreign investors. This affects economic growth and, ultimately, the well-being of the citizens of the Republic of Kazakhstan,” she says, pointing to the “notable decrease” in investment disputes brought against Kazakhstan, something which is backed up by the open data of the World Bank.

This data shows that, as of May 2021, of 19 cases brought against Kazakhstan to date, 10 were won by Kazakhstan, two were settled before an award was made, six were lost in arbitration, and just one is still being contested.

“This lone outstanding case involves the Moldovan investors Anatolie and Gabriel Stati, who – as the Belgian Court of Appeal confirmed in November 2021 – participated in a large-scale fraudulent scheme before, during, and after arbitration and deliberately ‘misled’ the Swedish Courts,” asserts Akhmetova.

“Kazakhstan has always strived to uphold the rights of international investors and will not tolerate bad actors who attempt to subvert justice and the rule of law. I would add that Meg Kinnear – vice president of the World Bank and secretary-general of the International Centre for Settlement of Investment Disputes (ICSID) – noted that Kazakhstan’s statistics are similar to the results of other states and show that Kazakhstan has a ‘very balanced’ approach to international arbitration.”

Kazakhstan has come a long way since independence in 1991, developing institutions that provide a welcoming climate for foreign investors and protect their rights under the law. It is not a coincidence that a large number of major foreign companies have made significant investments in the country.

“The development of our institutions has been accompanied by a decline in the number of international investment arbitration cases brought against Kazakhstan – something of which we are quite proud,” says Akhmetova. “As a result, the latest World Bank data is a strong testament to our progress in implementing the rule of law and creating fertile ground for business.”

One example of this is the creation of the Astana International Financial Centre (AIFC), which has its own court and International Arbitration Centre.

“The AIFC court is the first common law court system for civil and commercial disputes in Central Asia that is based on the norms and principles of English law,” says the vice minister. “Meanwhile, the International Arbitration Centre provides an independent, economical, and expeditious alternative to court litigation, operating to the highest international standards.”

To boost foreign investment, Kazakhstan has created Kazakh Invest to increase accessibility and transparency, meaning that all contact with government agencies regarding an investment happen through “one window”, as Akhmetova puts it. Last year alone, Kazakh Invest assisted on 57 investment projects worth 3.8 billion US dollars.

In January 2022, Kazakhstan witnessed the largest protests in the country’s history, which were marred by violence and attempts at destabilisation.

According to the World Bank, these protests clearly pointed to the need for faster progress on reforms to achieve sustainable growth and shared national prosperity.

In that regard, the authorities plan to take a stronger stand against corruption and to improve the rule of law, announcing steps to increase competition and private sector growth and to address government inefficiency. The bank says that reforms are also needed to raise living standards and the quality of human capital, reverse productivity stagnation, and accelerate a low-carbon economic transition.

According to Akhmetova, the government has learned the lesson. In June, a clear majority of Kazakh voters approved constitutional amendments which change the state system as a whole.

“It is important to emphasise the unity of the people of Kazakhstan at this difficult time. Citizens have supported the measures taken by President [Kassym-Jomart] Tokayev to restore peace, and have established voluntary people’s patrols to protect social facilities.”

The international community, she adds, remains confident in the country’s investment climate.

“Despite these events, international rating agencies like Fitch and Moody’s and Standard and Poor’s affirmed Kazakhstan’s sovereign credit rating as ‘Stable’, reflecting their confidence in Kazakhstan’s economy.

“Meanwhile, foreign investors continue to drive new developments in the country. For example, Chevron’s investment in the Tengiz Future Growth Project is set to continue throughout 2022, while other, ambitious local projects are being explored by the likes of Exxon Mobil, Alstom, TikTok, and Škoda.

“As I mentioned earlier, there are large-scale political reforms related to the renewal of political institutions and the president has declared the creation of a New Kazakhstan.

“The New Kazakhstan is an image of the future of our country as a whole and, we are talking about political reforms and transformation, alongside with a tireless fight against corruption.”

Kazakhstan has been a full member of the World Trade Organisation (WTO) since 2015. This enables Kazakhstan to trade with other countries in a predictable trade and investment environment, participate in the regulation of international trade in goods and services based on shared principles, and enjoy reduced tariff and non-tariff barriers to trade in industrial and agricultural goods.

In addition, WTO membership gives Kazakhstan access to an effective multilateral mechanism for settling trade disputes in foreign markets, including through the use of the WTO as a “negotiating platform” for multilateral trade negotiations.

“At the same time, better conditions have been created for the development of the investment climate,” says Akhmetova. “WTO membership enables the inflow of foreign investment into the country’s economy, improves the country’s image, strengthens the legislative framework, increases the transparency of investment procedures, and facilitates access to foreign financial institutions.”

Kazakhstan also enjoys close cooperation with several other international organisations, including the World Bank and the European Bank for Reconstruction and Development (EBRD). In recent years, Kazakhstan has partnered with the World Bank to implement the government’s Kazakhstan 2050 Development Strategy to accelerate the country’s transformation into a modern society with a well-diversified, private sector-driven economy.

Kazakhstan’s Foreign Investors Council includes the heads of 33 large multinational foreign companies and international organisations, and five observers. In partnership with the government and World Bank it has developed a draft Concept of Investment Policy until 2026.

The main target indicators in the draft concept are to bring the level of investment in fixed assets to 25.1 per cent of GDP and increase the inflow of foreign direct investment to 25.5 billion US dollars as early as 2026.

“Kazakhstan today is a dynamically developing young state which pursues a balanced foreign policy and is able to adapt to the external challenges and crises quickly and easily by improving its legislation toward the world standards,” concludes Akhmetova.

“For us, the crisis is a new opportunity, which the young generation uses as a chance to reach new heights in building the New Kazakhstan. I am sure that with joint efforts we will overcome any challenges and make Kazakhstan even stronger.”