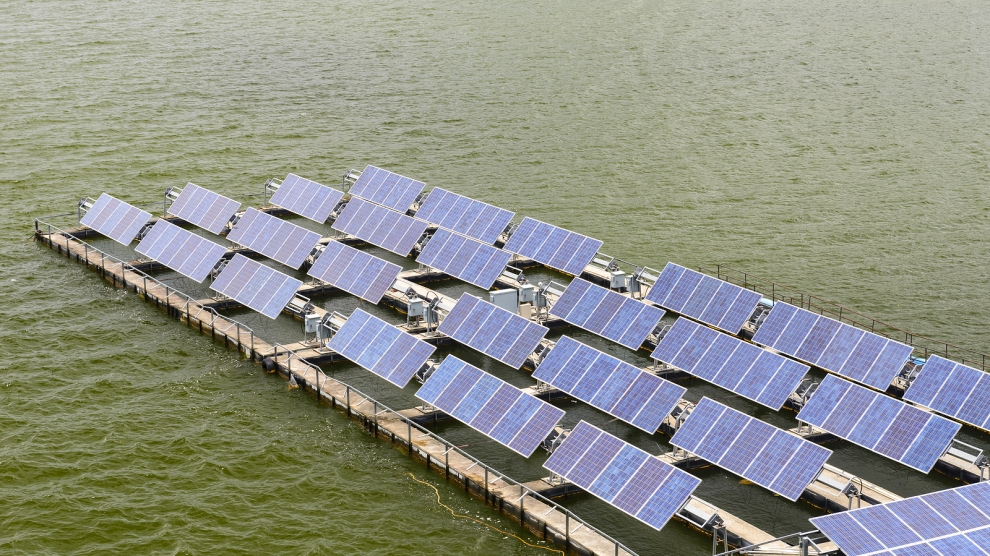 “Development of green-energy generation capacity and promotion of energy innovation are the directions towards which Lietuvos Energija Group has been confidently heading since introducing its LE 2030 strategy earlier this year. The floating solar power plant at Kruonis PSHP is one of the ideas that could help Lithuania to become an international leader in renewable energy solutions,” explained Darius Maikštėnas, chairman and CEO of Lietuvos Energija.

The experimental floating power plant has been developed by Lithuanian state-owned enterprise Lietuvos Energijos Gamyba (LE). The LBSA, in conjunction with the ministry of the economy and innovation selected the project from 139 applications. Lietuvos Energijos will be developing the project with scientists from Kaunas University of Technology (KTU).

“The successful start of the pilot solar power plant project in Kruonis PSHP is a good indicator that, as a state-owned enterprise, we really managed to get ahead in terms of innovation. Being the first of its kind in the region, this project provides us with a great possibility to become a leader in renewable energy technologies and promote Lithuania in the international R&D community,” said Dominykas Tuckus, development and infrastructure director at LE.

“According to experts, currently there are approximately 400 PSHP’s in the world; most of them do not exploit their reservoir areas. Even though the market of floating solar power plants has been recently expanding, there is no solution for the operators of the PSHPs that freeze over during winter,” said Professor Eugenijus Valatka, rector of KTU.

According to Saulius Gudzius, professor of the electrical and electronics engineering faculty at KTU, the solar power project in Kruonis PSHP is unique.

“As Bill Gates once said, if he had to choose his future career now, he would go for artificial intelligence, energy or biosciences, the three spheres he considers to have the biggest impact on the world. With the floating solar power plant project, we aim to combine the first two spheres – new energy solutions and digital technologies, developing an algorithm to manage the system of energy production. This experimental solution should make a significant contribution both in terms of creating a sustainable energy system and promoting technological competitiveness of the country,“ said Professor Gudzius.

The primary stage of the project is scheduled to be completed by the end of 2021. Both Lietuvos Energija and KTU plan to install an experimental 60 kW solar power plant in the upper-reservoir of the Kruonis PSHP.