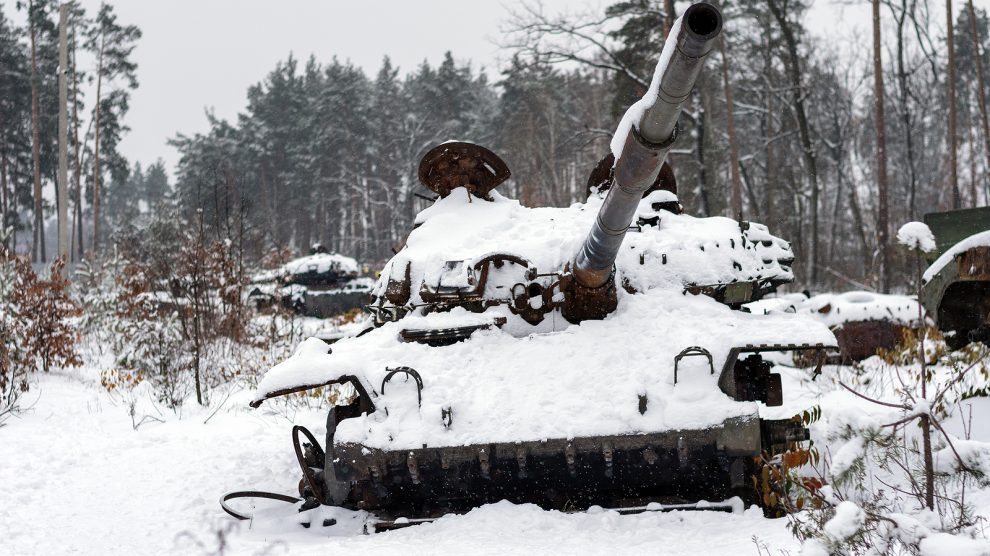 More than six million Ukrainians woke up on the first official day of winter on Thursday without electricity, as Kyiv renewed calls for it to be provided with US-made Patriot missile defence systems to protect its civilian infrastructure.

Russia has in recent weeks been targeting critical infrastructure and causing massive power, heating and water cuts, including in the capital Kyiv.

At a summit of NATO foreign ministers in Bucharest, the secretary general of the alliance, Jens Stoltenberg, accused Moscow of “trying to use winter as a weapon of war”.

NATO issued a statement that said Russia’s persistent attacks on Ukrainian civilian and energy grids were “depriving millions of basic human services”, and that it would assist Ukraine in repairing its energy infrastructure and protecting people from missile attacks.

Appearing at a joint news conference with Ukrainian Foreign Minister Dmytro Kuleba, Stoltenberg said: “We will stand by Ukraine as long as it takes, we will not back down.

“We realise that it is extremely important that President Putin is not able to win in Ukraine. That will be a tragedy for Ukraine, but it will also make the world more dangerous and much more vulnerable.”

The European Union on Wednesday proposed to set up a UN-backed court to investigate possible war crimes Russia committed in Ukraine, and to use frozen Russian assets to rebuild the war-torn country.

European Commission president Ursula von der Leyen said in a video message that the EU will work with international partners to get “the broadest international support possible” for the tribunal, while continuing to support the International Criminal Court.

“Russia and its oligarchs have to compensate Ukraine for the damage and cover the costs for rebuilding the country,” von der Leyen said. “We have the means to make Russia pay.”

The Ukrainian government has said a scheme it created for Russian soldiers to surrender is getting up to 100 enquiries a day. The “I Want To Live” project was started in September.

By calling a hotline or entering details through messenger apps, Russian troops can arrange the best way to surrender to Ukrainian forces. Officials in Kyiv say they’ve had more than 3,500 contacts from invading personnel, as well as their families.

A digital trade between Ukraine and the UK was struck at a London meeting of UK Trade Secretary Kemi Badenoch and Ukraine’s Minister for Trade and Economy Yulia Svyrydenko.

Svyrydenko said the deal illustrated that Ukrainian IT companies were in demand around the world despite all the challenges of war.

Two leading officials in Ukraine’s football association, including its head, were arrested on Tuesday over fraud and money-laundering allegations related to the construction of an artificial grass factory.

Andriy Pavelko, the president of the Ukraine FA, and Yuri Zapisotsky, the association’s general secretary, are accused of “embezzling” 26.5 million hryvnia (around 700,000 euros).

The European Commission on Wednesday recommended delaying the disbursement of crucial funding to Hungary, saying Prime Minister Viktor Orbán’s government has failed to allay its concerns over graft and the erosion of the rule of law. The EU’s executive arm said member states should conditionally approve Hungary’s Covid-era recovery plan, but Budapest would first have to comply with a set of reforms before it could receive 5.8 billion euros in grants from the bloc. Separately, the commission suggested freezing 7.5 billion euros of funds allocated to Hungary out of the bloc’s budget.

Belarus on Tuesday held a state funeral for its foreign minister who died suddenly at age 64, triggering speculation about possible foul play in his death after he leaned toward Western countries. Belarusian authorities didn’t give the cause of Vladimir Makei’s death on Saturday. He wasn’t known to suffer from any chronic illness. Some media and observers alleged without offering evidence that Makei could have been poisoned by security agencies of Belarus’ main ally Russia, which has warily watched Makei’s efforts to negotiate a rapprochement with the West.

France’s EDF, South Korea’s KHNP, and US-Canadian group Westinghouse Electric have made initial bids to build a new unit at the Czechia’s Dukovany nuclear power plant, Czech utility ČEZ said on Wednesday. Czechia has been a strong backer of nuclear energy as a carbon-free power source for the future, unlike European Union neighbours Germany and Austria. Majority state-owned ČEZ, which launched the Dukovany expansion tender in March, said final bids would come in by the end of September 2023.

Russian state gas producer Gazprom this week withdrew a threat to reduce gas supplies to Moldova but said it reserved the right to lower or halt flows in future if Moldova failed to make agreed payments. Last week, Gazprom accused Ukraine of withholding gas supplies which pass through the country on the way to Moldova – something Kyiv denied – and said it could start reducing those flows from Monday. Moldova and Ukraine last week accused Russia of using gas supplies as an instrument of blackmail, an accusation Moscow rejects.

Kosovo citizens may be able to freely travel to the EU’s passport-free Schengen zone by January 1, 2024, after European Union ambassadors on Wednesday agreed to resolve the issue. On the basis of this approval, the EU Presidency said it will start negotiations with the European Parliament. “Today we have taken an important step towards visa free travel for Kosovo and we now hope to reach an agreement with the European Parliament swiftly to make this promise a reality,” the Czech foreign minister, Jan Lipavsky, whose country currently holds the EU Presidency, said.

Albanian prosecutors on Wednesday asked for the house arrest of five public employees they blame for not protecting the country from a cyberattack by alleged Iranian hackers. Prosecutors said the five IT officials of the public administration department had failed to check the security of the system and update it with the most recent antivirus software. In September, Albania cut diplomatic ties with Iran over a July 15 cyberattack that temporarily shut down numerous Albanian government digital services and websites.

Kazakhstan’s Justice Ministry has granted registration to a green issues-focused party, making it the first group in almost two decades to receive permission to operate as a legal political entity. “For the first time in the history of Kazakhstan, a Green party has appeared. And for the first time in the last 20 years, a new party, Baytaq, has been officially registered,” party leader Azamatkhan Amirtai was quoted as saying by KazTAG news agency on November 30.

Tourism-dependent Croatia is moving to ban shopping on all but 16 Sundays of a year, giving retailers the right to decide when they would use the exemption. “We want to make it possible for retail employees to spend Sundays with their families,” the government said on Twitter on Thursday. The proposal may dent the country’s aspirations for year-round tourism. The predominantly Roman-Catholic nation’s economy is heavily dependent on tourism income. Most retailers are expected to use the exception during summer at the height of the tourist season.