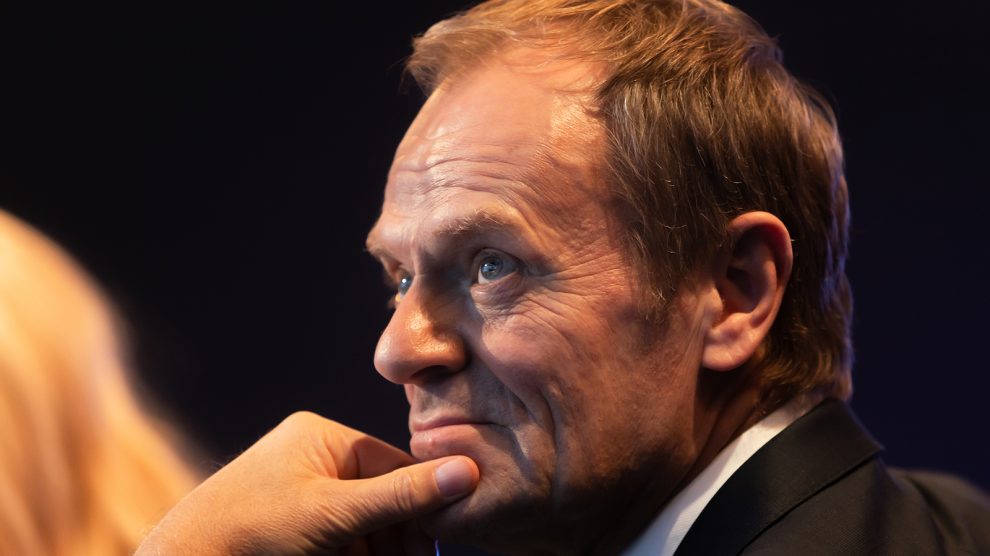 Donald Tusk, the leader of Poland’s main opposition party, called on Tuesday for the creation of a parliamentary commission to investigate surveillance after reports that powerful spyware was used against three people associated with the political opposition. “This is an unprecedented thing in our history. This is the biggest and deepest crisis of democracy after 1989,” said Tusk, who served as Poland’s prime minister from 2007-14 and president of the European Council from 2014-19. He said that his party would apply for the establishment of a commission of inquiry in the Sejm, the lower house of parliament, to examine surveillance with Pegasus, spyware which is made by the NSO Group of Israel and sold only to government agencies.

Citing a US-Poland trade agreement from 1990 and a wish to avoid further societal conflict, Polish President Andrzej Duda on Monday vetoed a bill that could have forced US company Discovery to sell the country’s biggest TV network, TVN. “Polish society has a lot of problems and conflicts. We don’t want another fight,” said Duda on December 27. “The United States is our ally and we cannot fight our ally and disrespect international business law.” Poland’s ruling Law and Justice party, PiS, on December 17 unexpectedly forced a vote in parliament on the media reform bill which would have prevented companies from outside the European Economic Area holding more than a 49 per cent stake in Polish radio and television stations.

Bulgarian shoppers are crossing Turkey’s western border in packed cars and buses, taking advantage of a declining Turkish lira to fuel their own shopping sprees. Their first stop is the currency exchange and then it’s off to the markets and grocery stores in the northwestern Turkish city of Edirne. Turkey is in the throes of an economic crisis with official inflation figures above 21 per cent, affecting the prices of food, fuel and household items. But for the Bulgarian shoppers, the grocery stores are a bargain and they leave the country with their trunks packed.

Hungary’s central bank will continue interest rate hikes in 2022 to rein in inflation, the Governor of the National Bank of Hungary told daily Magyar Nemzet in an interview published on Monday. Gyorgy Matolcsy said rate hikes must continue until the inflation outlook sustainably declines to around the bank’s three per cent target again. Headline inflation was running at an annual 7.4 per cent in November. The bank, which started its tightening cycle in June, raised its base rate by 30 basis points to 2.4 per cent earlier this month, its highest since May 2014, and pledged further rate hikes next year to anchor rising inflation expectations.

The new Czech centre-right government will freeze the pay of state workers and reduce previously announced pay hikes for others as it seeks to cut the budget gap amid a spike in inflation, ministers said on Wednesday. The government, appointed earlier this month, has pledged to cut the 2022 central government deficit below 300 billion crowns (13.66 billion US dollars), versus 380 billion crowns envisaged by the previous cabinet. “We are freezing pay for state administrative workers … and for ourselves,” Labour and Social Affairs Minister Marian Jurečka told a news conference.

US President Joe Biden and his Russian counterpart Vladimir Putin spoke on Thursday in a latest effort to defuse tensions surrounding Moscow’s military build-up on the border with Ukraine. It will be the second telephone call in less than a month between the two leaders, with Biden in early December warning Putin of “severe consequences” if Russian troops invaded. Biden, who is at his home in Delaware for the New Year’s holiday, stressed that Washington is looking for a “diplomatic path” out of the crisis, a senior administration official told reporters. “But we are also prepared to respond if Russia advances with a further invasion of Ukraine,” Biden told Putin, adding that Washington remained “gravely concerned” about the military build-up and wanted to see the Russian forces return “to their regular training areas.”

Earlier in the week Putin said that Russia and Belarus will hold joint war games early next year. Putin welcomed Belarusian President Alexander Lukashenko’s proposal to hold another round of military drills, saying on Wednesday that they could be held in February or March. Speaking during a meeting with Lukashenko in St. Petersburg, he added that military officials will coordinate details. Some officials in Ukraine have voiced concern that Russia may attack the country from Belarusian territory.

Lawyers for former Georgian President Mikheil Saakashvili have expressed concerns about his health following his transfer overnight from a military hospital in Gori to a prison in Rustavi. “I do not know how extreme the situation is following his transportation,” defence lawyer Nika Gvaramia told journalists on December 30. “I have to see if the prisoner is alive.” Gvaramia claimed Saakashvili had been “abducted” and that his defence team and relatives had no information about his condition.

The Lithuanian government is considering an aid package worth 130 million euros to support businesses impacted by the Baltic country’s spat with China. An initial six million euros has been allocated to companies from the European Regional Development Fund due to “the geopolitical tensions and the problems businesses are facing in China today, especially exporting businesses,” Finance Minister Gintare Skaiste told the cabinet, BNS news service reported on Wednesday. Lithuania says China has applied “unannounced sanctions” on its companies after it allowed Taiwan to open a representative office in Vilnius in November. With a population of 2.7 million, Lithuania has emerged as a vocal opponent of China’s policy toward Taiwan.

The president of North Macedonia, Stevo Pendarovski, has handed Social Democratic Union (SDSM) leader Dimitar Kovachevski a mandate to form a new government. Kovachevski, the new leader of the ruling SDSM, received the mandate after the SDSM announced that it had secured a majority in parliament. He is expected to be the party’s nominee to become the next prime minister. Kovachevski succeeded Zoran Zaev as the president of the SDSM after Zaev resigned on November 27. Zaev announced the move after a poor showing by the SDSM in local elections in October.

The Prosecutor’s Office of Bosnia and Herzegovina says it has filed an indictment against nine Bosnian Serbs over the killing of about 100 Muslim Bosniaks just after the start of the Bosnian War in 1992, the latest in a series of war crimes charges laid in the country. A statement from the Prosecutor’s Office on Wednesday said the nine, former members and commanders of the Bosnian Serb wartime army, were allegedly involved the 1992 killings of dozens of women, seniors, and children between the ages of 2 years old to 15 years old in the Serb-dominated Nevesinje area in southeastern Bosnia.

The director of a cultural centre in a largely Muslim part of Serbia has appealed for an acclaimed movie about the massacre of 8,000 Muslims by Bosnian Serb forces in Srebrenica in 1995 to be shown across Serbia. More than 1,000 people watched Quo Vadis, Aida?, named Best Film in the 2021 European Film Awards, in two screenings in the town of Novi Pazar on Tuesday – the first time it had been shown in any part of Serbia. “The tickets sold out in an hour and a half,” said Husein Memic, whose centre showed the movie. “We are appealing for the film to be screened across Serbia; it’s absolutely senseless for it to play only in Novi Pazar.”

A Kazakh delegation led by Trade and Integration Minister Bakhyt Sultanov visited Kabul last Friday to discuss trade, transit routes, and other economic cooperation as well as political ties with the Taliban-led government, Afghan media reported. The Taliban’s acting minister of industry and commerce, Nooruddin Azizi, said that efforts were under way to establish a mutual chamber of commerce between the two countries. The two sides discussed the resumption of direct flights, Azizi added without providing further details. Sultanov was quoted as saying that Kazakhstan was also interested in expanding trade through Afghanistan to South Asia.

Russia has doubled its purchases of natural gas from Turkmenistan this year amid rising global demand. Russia this year stands to import about 10 billion cubic metres of gas from Turkmenistan, Russian envoy to Ashgabat Alexander Blokhin said last Friday. That’s nearly twice the amount imported in 2020. This year’s volumes were on par with the period before 2016, when Russia halted gas imports from the ex-Soviet Central Asian nation amid pricing disputes and a slump in global prices. Turkmenistan owns the world’s fourth-largest known reserves of natural gas but has limited infrastructure to export its energy resources.

Bracing for the omicron surge: Elsewhere in emerging Europe
Time for tourism in Central and Eastern Europe to move up the value chain
Comment