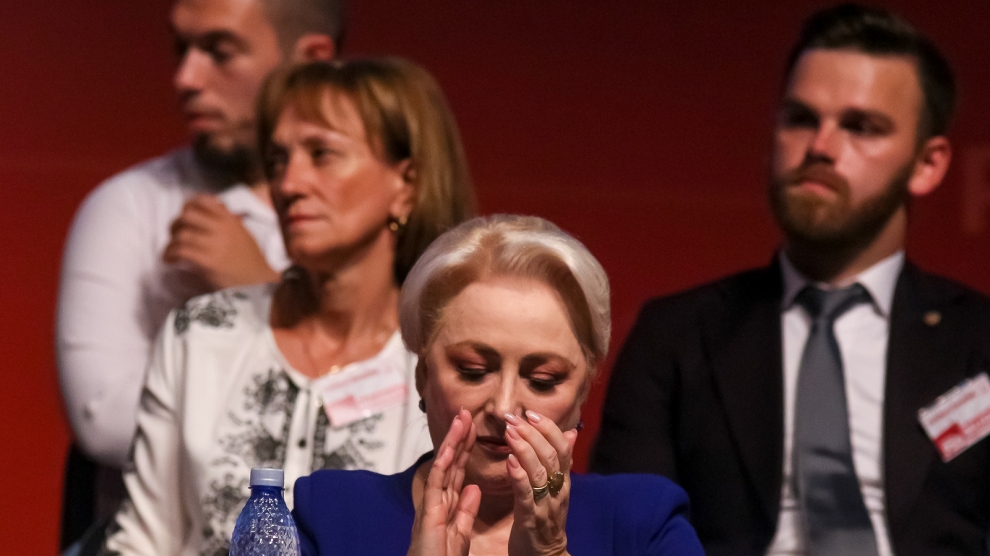 Romania’s government has been defeated in a vote of no-confidence, spelling the end for the administration of the prime minister, Viorica Dancilă (pictured above, centre).

The no-confidence motion was supported by 238 of the country’s 465 MPs and senators. This despite the ruling PSD reportedly offering wavering MPs up to one million euros in order to vote against the motion or to abstain.

The government had been hamstrung since August when ALDE, the junior party in Romania’s ruling coalition, pulled its ministers out of the government amidst a row over restructuring, leaving the larger member of the coalition, Dancilă’s PSD, without a majority in parliament.

The country’s president, Klaus Iohannis, is now expected to convene the country’s parliamentary parties for talks on forming a new coalition early next week. Doing so could be difficult: the opposition parties agree on little more than toppling Mrs Dăncilă and both the Liberal party (the PNL), and the Save Romania Union (USR) are thought to be wary of taking office with a parliamentary election little more than a year away.

Any new government will have to make unpopular spending cuts to balance the country’s budget, with the public deficit forecast to grow as high as 3.4 per cent by the end of the year. Mrs Dăncilă’s government has borrowed more than seven billion euros from external markets in 2019, the highest amount since 2011.

Constitutionally, the president is now required to nominate a new prime minister, who will have 60 days to form a government. Should he or she fail to do so, another nomination is made. Should the second nominee fail to form a government, in normal circumstances parliament is dissolved and a snap general election would be held. However, under the terms of the Romanian constitution parliament cannot be dissolved during a six-month period prior to the end of a presidential mandate. Mr Iohannis’s current mandate ends on December 21.

Nevertheless, some politicians have already called on the president to agree on a timetable that will allow an early election as soon as possible.

“After three years of chaos, incompetence and irresponsibility, the PSD today lost power,” said Dan Barna, leader of the USR. “I now call on the president and Romania’s responsible political parties to agree on a constitutional path that will end with the dissolution of parliament and early elections.”

The success of the no-confidence motion leaves Mrs Dăncilă’s already shaky presidential bid in tatters. Despite her widespread unpopularity however – in some polls she is in third or fourth place behind Mr Iohannis, Mr Barna and the independent MEP Mircea Diaconu – she has nevertheless vowed to go ahead with her formal campaign launch on October 12.

“I led a good government,” said Mrs Dăncilă after the vote. “We did our duty.”

She will remain in office as an interim prime minister until a new government is formed.

Russia blocks coal supplies to Ukraine through Belarus
Mogherini: EU has invested in Ukraine more than in any other country
Comment