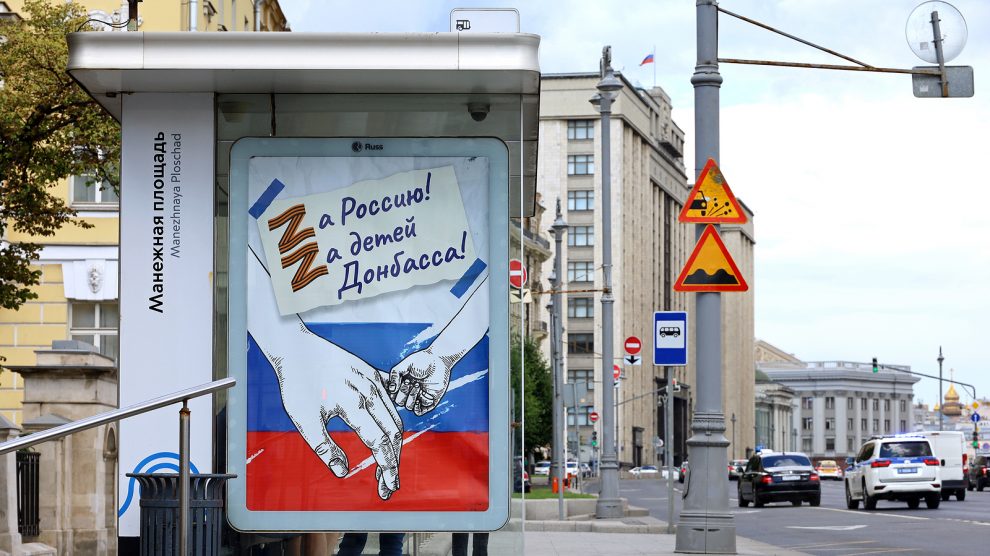 Russia last weekend organised sham referenda in the four regions and, as expected, the results reported by Russian state media showed overwhelming support for joining Russia. German Foreign Minister Annalena Baerbock said on Thursday that people in occupied regions of Ukraine had been taken from their homes and workplaces by threat and sometimes at gunpoint during the referenda.

Russia does not fully control any of the four regions it has decided to annex. Although most of Luhansk remains in Russian hands, Moscow only controls 60 per cent of Donetsk.

The European Commission president, Ursula von der Leyen, this week proposed a fresh round of sanctions on Russia designed “to make the Kremlin pay” for escalating the conflict in Ukraine.

The proposed eighth package of “biting” sanctions includes a cap on the price of Russian oil and further curbs on hi-tech trade.

However, Hungary’s prime minister, Viktor Orbán has already indicated he is unlikely to back another tranche of sanctions, and recently announced a “national consultation” to see if EU sanctions against Russia had the backing of the Hungarian people.

European leaders also this week said that they will ramp up security around oil and gas installations after the suspected sabotage of two major pipelines.

The EU, US and Nato have suggested damage to the pipelines, between Russia and Germany, was deliberate, but have not yet blamed Russia directly. Ukraine, however, has accused Russia of deliberately causing the leaks in what it described as a “terrorist attack”.

The leaks, on the Nord Stream 1 and Nord Stream 2 pipelines, which are not currently being used to supply gas to Europe, were discovered on Monday and Tuesday.

The United States on Wednesday confirmed that it will provide an additional 1.1 billion US dollars in aid to Ukraine, with funding for 18 more advanced rocket systems and other weapons to counter drones that Russia has been using against Ukrainian troops.

The latest package is being provided under the Ukraine Security Assistance Initiative, which funds contracts to purchase weapons and equipment, and which brings the total of US aid to Ukraine to nearly 17 billion US dollars since the Joe Biden administration took office.

Bulgarians will on Sunday vote for the fourth time since April 2021 in parliamentary elections, expected to be marked by low voter turnout: some 50.61 per cent voted in April 2021, when the former ruling centre-right GERB won the popular vote but failed to secure coalition partners. Turnout fell to 42.19 per cent in July 2021, when There’s Such a People came first but ignored coalition options in search of an outright majority in the next round. Turnout fell again to 40.23 per cent in November 2021, when Kiril Petkov’s We Continue the Change came top and formed an uneasy, mainly pro-Western government. Ahead of the vote, GERB currently tops polls with around 24 per cent of the vote.

Leaders from Poland, Norway and Denmark on Tuesday attended a ceremony to mark the opening of the new Baltic Pipe, a key stage in the drive to wean Poland and Europe off Russian gas. The pipeline will transport natural gas from the Norwegian shelf via Denmark and through the Baltic Sea to Poland. It is the centrepiece of a Polish strategy to diversify away from Russia that began years before Moscow’s February invasion of Ukraine triggered a global energy crisis. “The era of Russian domination in the field of gas is coming to an end, the era that was marked by blackmail, threats and extortion,” Polish Prime Minister Mateusz Morawiecki said at the inauguration at Budno in western Poland.

Slovakia’s prime minister this week said soaring electricity costs had left his country’s economy at risk of “collapse”, in the starkest comments yet by an EU leader on the effects of the global energy crisis. Eduard Heger said the huge increase in prices following Russia’s full-scale invasion of Ukraine would “kill our economy” unless Slovakia received billions of euros of support from Brussels, and warned he would be forced to nationalise the country’s power supplies if this was not forthcoming.

Czech police fired warning shots in the air before detaining the driver of a van carrying 15 migrants Thursday morning after Czechia and Austria renewed checks at the border with Slovakia amid a new wave of migration. Czech police reported traffic delays, especially for trucks, after the measure became effective on Thursday at 27 border crossings, while the Austrian authorities enforced it at 11 crossings. The checks will be initially in place for 10 days.

Armenia said three soldiers were killed by shelling from Azerbaijan on Wednesday, Tass agency reported, as the two neighbours accused each other of violating a ceasefire that ended two days of warfare. Tass cited an Armenian defence ministry statement but did not give details. Last Friday, both sides accused each other of breaching the truce by firing across the border. After border clashes two weeks ago that killed almost 200 soldiers, the worst bout of fighting since a six-week war between the two ex-Soviet countries in late 2020, the two sides agreed to a ceasefire deal brokered by Russia.

The European Union and the US on Monday questioned Serbia’s proclaimed commitment to join Europe’s 27-nation bloc after Belgrade signed an agreement with Moscow pledging long-term “consultations” on foreign policy matters amid Russia’s war in Ukraine. Serbia’s officials signed the deal last week in New York with Russian Foreign Minister Sergey Lavrov on the sidelines of the United Nations General Assembly, where most Western delegations shunned Russia’s top diplomat over the country’s invasion of Ukraine.

Kyrgyz Education Minister Almaz Beishenaliev has been detained on charges of taking bribes in connection with student admissions to the Central Asian nation’s universities. The Interior Ministry said on Wednesday that Beishenaliev is suspected of accepting a total of 110,000 US dollars for arranging foreign students’ acceptance to universities in Kyrgyzstan. The ministry’s statement said detailed information on the case will be made public at a later date. The 41-year-old Beishenaliev has initiated multiple reforms in the education system since his appointment to the post in November 2020.

Rents have shot up by a third in parts of Kazakhstan’s borderlands with Russia, as the housing market reacts to increased demand from Russians fleeing mobilisation. The news will fuel concerns being aired on social media about the impact of the influx of Russians to Kazakhstan. Rents in border areas rose by 15-34 percent in the week to September 25, a study by Krisha.kz, a website that advertises real estate, found. “The price increase took place mainly over the weekend [September 24-25] and is connected to an increase in demand for rental accommodation,” it reported.