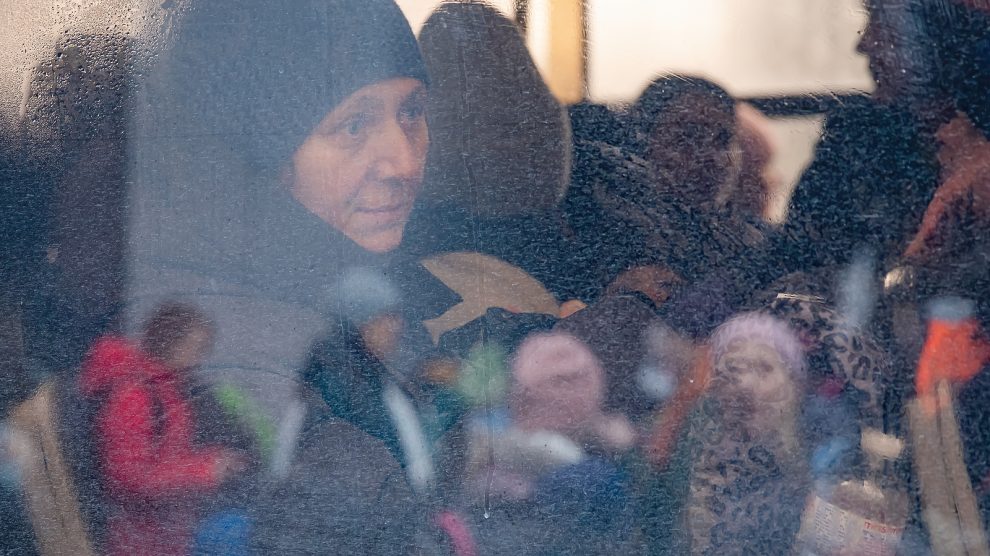 The Ukraine war cannot lead to Russia becoming richer and should instead end in punishment, Estonia’s Prime Minister Kaja Kallas said this week.

“The message that we have to say loud and clear is that aggression cannot pay off,” Kallas told Euronews, while attending an EU-Western Balkans summit in Tirana, Albania.

“If you attack a sovereign country, then you are not leaving with more territories or more resources, but you are punished for this because we have agreed in the international rules-based order that it’s illegal to attack another country.”

Russia on Monday launched another wave of missile attacks on Kyiv and other cities in Ukraine. Ukraine claimed to have shot down more than 60 out of 70 incoming missiles, but officials say they are deeply concerned by the small number that continue to get through, leaving the country’s energy infrastructure on its knees.

On the same day, Ukraine used low-flying Soviet-era drones to strike two air bases deep inside Russia, at Ryazan and Saratov, damaging long-range bombers. The next day, another strike occurred at Khalino air base near Kursk, home to Su-30SM fighter jets. Not since World War II have air raids struck so deep into Russia.

The risk of Russian President Vladimir President Putin using nuclear weapons as part of his war in Ukraine has decreased in response to international pressure, German Chancellor Olaf Scholz said in an interview published on Thursday.

Defending Germany’s support for Ukraine, which critics in Kyiv and elsewhere in Europe say has been too reticent, Scholz said after the United States, Germany was one of the biggest supporters of Ukraine, including with weapon supplies.

“We are doing everything we can to prevent a direct war between Russia and NATO. Such a conflict would have only losers – all over the world,” he said.

Putin this week admitted his war in Ukraine could turn into a “long-term process” as he sought to defend an invasion in which Russian troops have been forced to retreat and even airbases deep inside Russia have come under attack.

Speaking to members of his personal human rights council on Wednesday, Putin claimed that Russia would not use nuclear weapons first in any conflict, denied that Russian troops were deserting en masse from the field of battle, and claimed he would not need to mobilise more troops, a process that has caused considerable upheaval in Russia.

NATO’s secretary general, Jens Stoltenberg, this week said Russia is attempting to “freeze” the fighting in Ukraine over the winter to prepare its forces for a renewed assault early next year.

Stoltenberg urged NATO allies to continue sending weapons to Kyiv over the winter, adding that the conditions for a peaceful settlement to the war are “not there now”.

Ukrainian Foreign Minister Dmytro Kuleba on Wednesday said his country’s diplomatic missions have recently received 31 suspicious or threatening packages — and that the parcels appear to have been sent from Germany.

Ukraine said last week that “bloody packages” containing animal eyes, covered in a pungent liquid, had been sent to a significant number of its missions in Europe.

European Union justice and interior ministers voted on Thursday to admit Croatia to the passport-free Schengen travel zone. Croatia, which became an EU member in 2013, is set to join Schengen on January 1, 2023: the date it will also officially adopt the euro single currency. At the same meeting, Bulgaria’s and Romania’s Schengen applications were rejected. Austria vetoed both Bulgaria and Romania, while the Netherlands vetoed Bulgaria.

The Czech government meanwhile is ready to introduce energy price caps for large firms by the end of the year as it expands help to businesses hit by soaring electricity and gas costs, Prime Minister Petr Fiala said. The help could be similar to measures already introduced for households and smaller businesses, Fiala told CNN Prima News late on Wednesday. He added European Union decisions have cleared the way to offering help to bigger firms.

The European Union has drafted a new proposal for normalisation of ties between Kosovo and Serbia with a clear timeline of actions, according to a senior EU diplomat, speaking on the sidelines of the EU-Western Balkans summit on Tuesday. The draft proposal was sent to both parties on Monday, the diplomat said, speaking on condition of anonymity. They added that they expected the two parties would reach a final agreement in less than a year.

Political allies of jailed Belarusian protest leader Maria Kolesnikova said on Wednesday a rapid deterioration in her health last week and eventual hospitalisation were prompted by bad treatment in prison. The strident critic of President Alexander Lukashenko underwent surgery last week and was put in intensive care in a ward in Gomel in southeast Belarus. Her father said she had been treated for a perforated ulcer and peritonitis.

The European Union announced on Wednesday that it has begun legal action at the World Trade Organisation against China over what it says are import restrictions Beijing has imposed on Lithuania. The European Commission estimates that China cut trade from the EU member country by 80 per cent this year after Lithuania broke with diplomatic custom in 2021 by allowing a Taiwanese office in Vilnius to bear the name Taiwan, instead of Chinese Taipei, which most other countries use to avoid offending Beijing.

Poland picked the former head of public television as a representative on the board of executive directors of the World Bank, the National Bank of Poland (NBP) said on Wednesday, a decision that was condemned by opposition lawmakers. Closely linked to the ruling Law and Justice (PiS) party, Jacek Kurski first became head of state broadcaster TVP in 2016, implementing changes in its coverage that critics say turned it into a vehicle for government propaganda.

The health of Georgia’s jailed former President Mikheil Saakashvili continues to rapidly decline, leading to calls for the government to take action before his condition becomes even more dire. People who have recently visited Saakashvili in hospital – including his lawyers, family members, and Georgia’s public defender – have raised alarms about the former president’s condition. “The situation is indeed severe and with this dynamic, it will become critical in a few months,” Nino Lomjaria, Georgia’s public defender, told reporters after visiting Saakashvili last Sunday.

Papers, please
How a proposed EU carbon tax can speed up energy transition in the Western Balkans
Comment