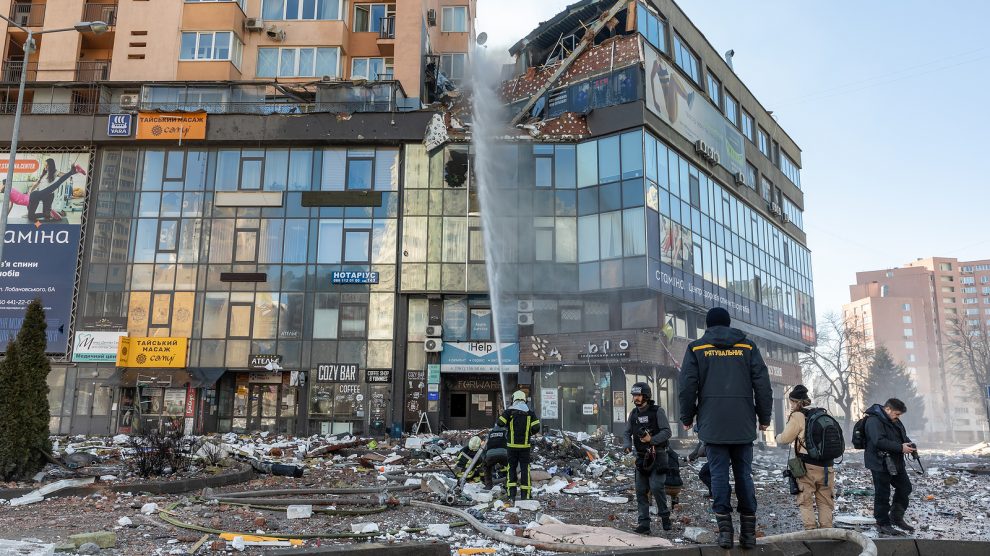 Russia’s war on Ukraine has entered its third week. Hundreds of civilians have been reported to be have been killed or wounded while more than two million Ukrainian refugees have so far fled their homeland, according to UN estimates, the vast majority to Poland.

On Wednesday, a children’s hospital and maternity ward in the city of Mariupol was destroyed by a Russian airstrike, killing three people, including a small child. A further 17 were seriously injured.

Russia has stepped up its attacks on towns and cities after failing to capture any settlement of note, with the exception of Kherson, close to Crimea. In the north of Ukraine, its advance on the capital Kyiv appears to have come to a halt.

On Thursday, a meeting in Turkey between the Russian and Ukrainian foreign ministers, Sergei Lavrov and Dmytro Kuleba, brokered by Turkish Foreign Minister Mevlüt Çavuşoğlu, failed to reach an agreement to end the fighting.

“Russia wants us to surrender. We will not surrender,” said Kuleba.

Lavrov meanwhile told reporters: “We’re not planning to attack other countries. We didn’t even attack Ukraine.”

The US House of Representatives on Wednesday voted to rush through a 13.6 billion US dollars aid package that would increase military and humanitarian support to Ukraine and its European allies.

The aid includes 6.5 billion US dollars for the US costs of sending troops and weapons to Eastern Europe and equipping allied forces there, and 6.8 billion US dollars to care for refugees and provide economic support to allies. Senate approval is expected within days. The House also passed a bill banning Russia oil imports.

A Polish plan to supply MIG-29 fighter jets to Ukraine via Germany however hit a snag this week when the US refused to co-operate. Poland had proposed that the planes would be sent to the US airbase in Ramstein, Germany, and then flown into Ukraine. The US wants the fighters flown directly into Ukraine, by Ukrainian pilots.

The US meanwhile warned Russia could be preparing to use chemical or biological weapons in the war. White House press secretary Jen Psaki said on Wednesday that Russia had been making “false claims about alleged US biological weapons labs and chemical weapons development in Ukraine”, and added that the allegations had been echoed in Beijing.

“Now that Russia has made these false claims, and China has seemingly endorsed this propaganda, we should all be on the lookout for Russia to possibly use chemical or biological weapons in Ukraine, or to create a false flag operation using them,” she tweeted.

Amid a shutdown of domestic soccer during the invasion by Russia, FIFA agreed Tuesday to Ukraine’s request to postpone the national team’s World Cup qualifying playoff in Scotland in two weeks’ time.

FIFA also awarded Poland a bye through its playoff semifinal against Russia that was also scheduled on March 24.

The European Parliament on Wednesday, by a large majority, adopted a resolution calling on the European Commission to begin action to withhold funds from member states that fail to respect the rule of law. The document names Hungary and Poland as particular violators.

The resolution was condemned by Poland’s ruling Law and Justice (PiS) party, which unsuccessfully proposed an amendment calling for the rule-of-law mechanism not to be applied due to the war in Ukraine and the pandemic.

On Thursday, Hungary’s parliament elected the ruling Fidesz party lawmaker Katalin Novák as the country’s first female president. Novák, 44, has served as deputy chair of Prime Minister Viktor Orbán’s Fidesz and was family affairs minister in charge of his economic support agenda for the middle class, including subsidies for housing, state-backed home loans and tax cuts.

Analysts say Orbán, who faces a close election in less than four weeks, had sought to appeal to female voters in picking Novák for the largely ceremonial role of president for a five-year term.

French far-right presidential challenger Marine Le Pen received a 10.7 million euros loan for her campaign from Hungary’s MKB Bank, whose major shareholders include businessmen close to Orbán. The personal loan was disclosed on a form that presidential candidates must submit to regulators about their personal assets and debts, and was made public this week.

The Lithuanian capital Vilnius has given the Russian embassy a new address on “Ukrainian Heroes’ Street” to protest Moscow’s invasion of its pro-western neighbour.

“From today, the business card of every employee of the Russian embassy will be decorated with a note honouring Ukraine’s fighting, and everyone will have to think about the atrocities of the Russian regime against the peaceful Ukrainian nation when writing this street name,” Vilnius mayor Remigijus Simasius claimed in a statement.

Latvia, a fellow Baltic state, has also made use of the tactic. Officials from the capital Riga agreed last week to rename the Russian embassy’s address to “Independent Ukraine Street”.

Former US commander Wesley Clark has called on NATO to start procedures for Kosovo’s membership in the military alliance as soon as possible. Clark was the Supreme Allied Commander Europe of NATO from 1997 to 2000, and led the NATO campaign against Serbia during the war in Kosovo in 1999.

“I think Kosovo should be a NATO member and I think this should happen as soon as possible,” Clark told Kosovo’s Koha TV in an interview on Wednesday.

Romania this week lifted all Covid-19 restrictions including requiring a digital pass to access institutions and the obligation to wear protective masks both indoors and outside. The decision stems from the country’s coalition government’s decision to no longer extend a nation-wide state of alert two years after the pandemic first hit Romania.

Early voting has already got underway for a snap March 12 presidential election in Turkmenistan. The voting is just a distracting sideshow, however. Serdar Berdymukhamedov, son of current president Gurbanguly Berdymukhamedov, will easily sweep aside his eight seat-warming rivals.