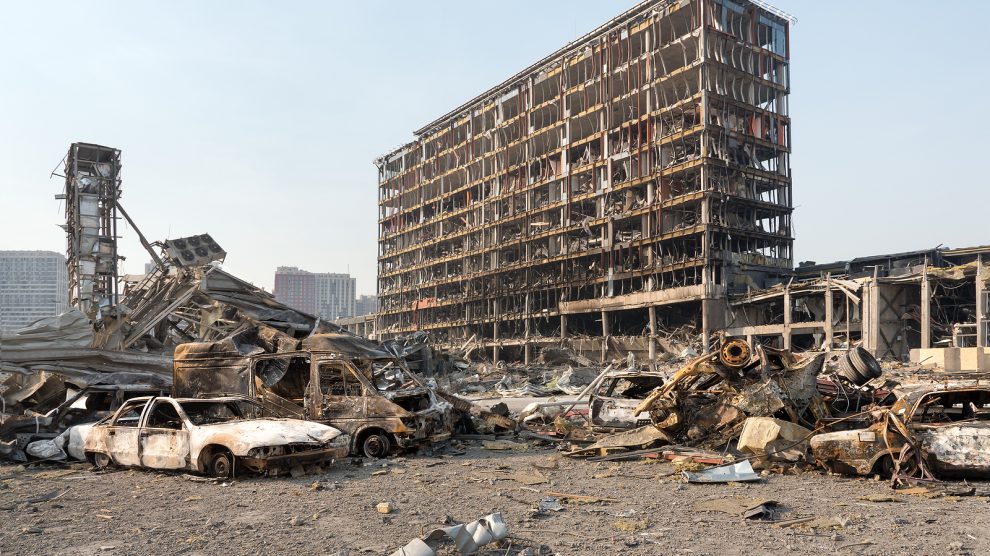 Ukraine’s deputy foreign minister, Emine Dzhaparova, condemned the “sheer horror” and “pure evil” of Russia’s war in Ukraine in an address to the UN’s Human Rights Council on Thursday.

Russia was committing “the most gruesome human rights violations on the European continent in decades,” Dzhaparova said at an extraordinary meeting of the council about Moscow’s alleged violations.

The Russian-controlled administration in the Ukrainian city of Kherson meanwhile has said it plans to request annexation by Moscow, a move that would confirm the Kremlin’s permanent occupation of Ukrainian territory captured since February.

Vitali Klitschko, mayor of Kyiv, has warned residents who fled the city that it is still not safe to return to Ukraine. He said on Thursday, “Unfortunately, we cannot guarantee the safety of every resident today. Every corner of Ukraine, every city and town, is under threat as Russia continues its barbaric war against our country.”

The withdrawal of Russian forces from Kharkiv is a tacit recognition of Russia’s inability to capture key Ukrainian cities where they expected limited resistance from the population, the UK’s Ministry of Defence has said in its latest intelligence update.

Ukrainian forces were continuing to counter attack to the north of the city and had recaptured several towns and villages near the Russian border, it continued.

It also said Moscow’s prioritisation of the operation in Donbas had left those units left around Kharkiv “vulnerable to the mobile, and highly motivated, Ukrainian counter-attacking force”.

Ukraine’s announcement on Tuesday that it would suspend the flow of gas through a transit point bringing Russian fuel to Europe does not present a gas supply issue, the European Commission said on Thursday.

“While these developments may have an impact on part of the gas transit to the EU, they do not bring about any immediate security of supply issue for the EU,” a commission spokesperson told the news agency Reuters.

The US State Department has released a fresh study on Russia’s disinformation campaigns on chemical and biological weapons, accusing Moscow of using its seats on international bodies such as the UN Security Council and the Organisation for the Prohibition of Chemical Weapons to help justify its war on Ukraine.

The State Department said the Russian government had used similar tactics during the war in Syria, in a bid to shield the Assad regime when it used chemical weapons including a 2017 sarin gas attack in Khan Sheikhun.

A Ukrainian commander in Mariupol has appealed directly to Elon Musk, asking the world’s richest man to intervene on behalf of those trapped by Russian forces in control of the southern city.

“People say you come from another planet to teach people to believe in the impossible,” Serhiy Volyna tweeted at Musk. “Our planets are next to each other, as I live where it is nearly impossible to survive. Help us get out of Azovstal to a mediating country. If not you, then who?”

Finland must apply to join NATO without delay in the wake of Russia’s attack on Ukraine, its president and prime minister have said, confirming a historic change in the Nordic country’s security policy after decades of military non-alignment.

Sauli Niinistö and Sanna Marin made the call in a joint statement on Thursday, adding: “We hope that the national steps still needed to make this decision will be taken rapidly within the next few days.”

The most popular party in Slovenia’s parliamentary elections says it has agreed to form a coalition government. The liberal Freedom Movement (GS) party of political novice Robert Golob secured 34.5% in April’s vote, ahead of the Slovenian Democratic Party (SDS) of populist Prime Minister Janez Jansa. Golob told reporters on Wednesday that he had agreed to form a coalition with two other parties to create a cabinet of “experienced personalities and enthusiastic experts”.

Hungary upped the stakes in talks about European Union oil sanctions on Wednesday, saying a deal was out of reach until Brussels offers a “solution” measured in hundreds of millions of dollars to replace Russian oil in the Hungarian economy. Foreign Minister Péter Szijjártó said on his Facebook page that there was still no acceptable proposal in sight. He also said Russian shipments via pipelines should be exempted from any oil embargo that should only apply to deliveries by sea.

Russia’s ambassador to Poland was splattered with red paint thrown at him by protesters opposed to the war in Ukraine, preventing him from paying respects on Monday at a Warsaw cemetery to Red Army soldiers who died during World War II. Russian Foreign Ministry spokeswoman Maria Zakharova denounced the attack, saying that “we won’t be scared” while the “people of Europe should be scared to see their reflection in a mirror.” Polish Foreign Minister Zbigniew Rau described the incident as “highly deplorable.”

The UN General Assembly has voted overwhelmingly for Czechia to replace Russia on the Human Rights Council, the world organisation’s leading human rights body. The vote was 157 countries in favour and 23 abstentions. Czechia was the only candidate for the seat left vacant when the General Assembly voted to suspend Russia over “gross and systematic violations and abuses of human rights” by invading Russian troops in Ukraine. Seats on the 47-member Geneva-based council are divided among regional groups and a replacement for Russia had to come from an East European country.

Albania’s prime minister on Tuesday visited Kosovo’s ex-president Hashim Thaci in a prison in The Netherlands, where he is being held pending trial for alleged war crimes. Edi Rama told journalists after the meeting that Thaci believed his trial would provide a way of demonstrating “in front of justice the purity of the liberating war” that Albanian separatists fought in 1998-1999 against Serbian forces. In 2020 Thaci resigned as Kosovo’s president and was flown to The Hague to face charges including war crimes, murder, torture and persecution – all which he has denied.

The top international official in Bosnia called the escalating political crisis in the country the most serious since the 1992-1995 war that saw 100,000 people die and warned in a report circulated Tuesday that its potential to become a security crisis is very real. Christian Schmidt, the high representative overseeing implementation of the 1995 peace agreement that ended the devastating war, said leaders of the country’s Bosnian Serb-dominated entity have systematically challenged its provisions and intensified their activities aimed at usurping powers granted to the federal government.

Thousands of opposition supporters rallied in the Armenian capital on Wednesday, besieging the mayor’s office for hours as they kept up pressure on the country’s prime minister to step down for seeking a peace treaty with neighbouring Azerbaijan. Daily protests have swept Yerevan since last month, with opposition supporters blocking streets and blockading government buildings to push for the resignation of Prime Minister Nikol Pashinyan. Pashinyan became a renewed target of rancour after he spoke in parliament about the need to sign a peace deal with Azerbaijan.

London-listed fund HydrogenOne Capital Growth has invested 24 million euros in Estonia-based maker of clean energy technology Elcogen AS, it was announced on Monday. The investment will enable Elcogen to expand its capabilities, using its reversible solid oxide cell technology to produce green hydrogen. In particular, this includes the addition of a new, automated production line for solid oxide fuel cells at the company’s facilities in Tallinn. Initially it would produce 25 MW annually, eventually rising to 50 MW annually.

Romania’s foreign ministry on Wednesday said that two Romanian journalists were detained for several hours in Moldova’s separatist region of Transnistria. The two journalists, who were working for Digi24 television news channel, were detained by security forces in Tiraspol, the capital of the Russian-backed region. They were released after diplomatic efforts from Romania, Moldova and the Organization for Security and Cooperation in Europe, the ministry said in a statement.