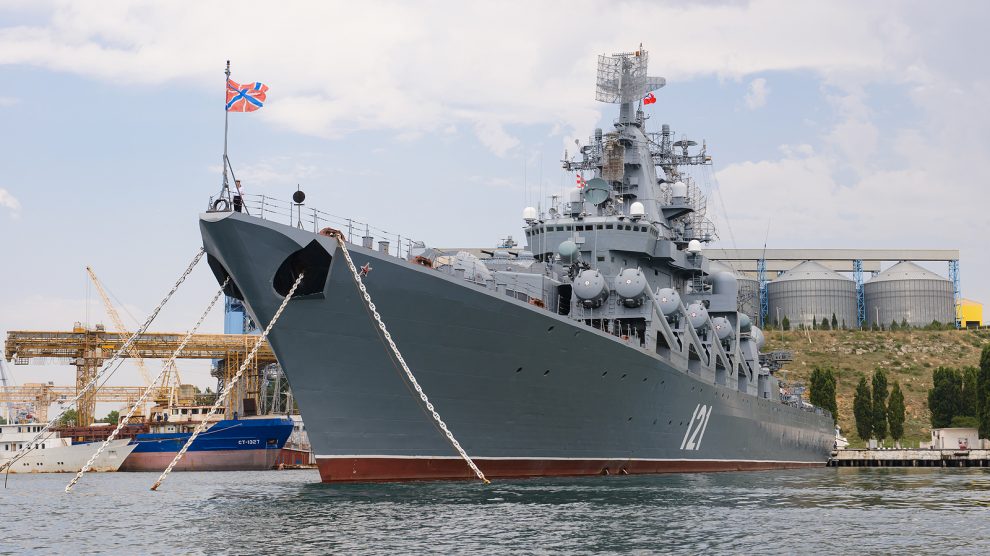 Late on Wednesday, Ukraine claimed to have hit the Moskva, flagship of Russia’s Black Sea fleet, with two Neptune missiles. Russia subsequently confirmed that the cruiser class ship had been damaged, although as a result of an explosion of ammunition on board, Moscow said. The ship later sank.

As the war entered its 50th day on Thursday, Ukraine’s president Volodymyr Zelensky called for an oil embargo in a TV broadcast, adding that he was waiting for Europe to state that it is ready to give up all Russian energy. “The European Union must stop sponsoring Russia’s military machine,” he said.

Zelensky also confirmed that forensic experts from the International Criminal Court (ICC) had visited the Kyiv suburb of Bucha on Wednesday to investigate possible war crimes. “Responsibility for the Russian military for war crimes is inevitable. We will drag them all to the tribunal. And not only for what was done in Bucha.” ICC Chief Prosecutor Karim Khan meanwhile told reporters: “Ukraine is a crime scene.”

The United States said this week it would send an extra 800 million US dollars worth of military hardware to Ukraine including artillery, armoured personnel carriers and helicopters. France and Germany also pledged more.

The US also set to send a top cabinet member such as Secretary of State Antony Blinken or Defence Secretary Austin Lloyd to Kyiv in a show of solidarity. UK PM Boris Johnson, as well as the presidents of Poland, Latvia, Lithuania, and Estonia have all visited the Ukrainian capital in recent days, where shops, bars, restaurants and other businesses are beginning to reopen. On Thursday, ridesharing giant Uber announced that it would resume services in the city.

In the east and south of Ukraine, Russian forces look “fully ready” for a fresh assault in the Donetsk and Kherson regions, military officials said on Thursday. The status of the besieged city of Mariupol meanwhile, remains precarious. Russia claimed this week to have captured the city’s port, although Ukraine’s defence ministry said it had no information about the reported surrender of more than 1,000 troops defending the Azovstal industrial area and the port.

Mariupol’s mayor has said 21,000 civilians have died and more than 100,000 remain in the decimated city awaiting evacuation. Before the invasion, the city had a population of around 450,000.

Ukraine’s security service SBU said they had foiled an attempt by Russia to get Medvedchuk out of the country. The wealthy businessman leads the pro-Russian Opposition Platform/For Life party in Ukraine, and his daughter has Putin as a godfather.

A Polish government special commission has reinforced its earlier allegations that the 2010 plane crash that killed President Lech Kaczynski and 95 others in Russia was the result of Moscow’s assassination plan. The latest of the commission’s reports, released Monday, alleges that an intentional detonation of planted explosives caused the April 10, 2010 crash of Soviet-made Tu-154M plane that killed Kaczynski, the first lady and 94 other government and armed forces figures as well as many prominent Poles.

Serbia’s President Aleksandar Vučić has rejected criticism its Chinese FK-3 surface-to-air missiles could pose a threat to its neighbours and described the purchase as “legitimate, completely regular and transparent”. In a video statement on his official website, Vučić said the weapons system posed no threat, with Serbia surrounded by NATO members, and that Montenegro and Kosovo needed to let his country chart its own course. “They are not able to say how we threaten them with defensive weapons, because it is a system that serves to defend against cruise missiles and planes that would violate the airspace of Serbia,” he said.

State kindergarten and primary school teachers in North Macedonia began an open-ended strike Monday, seeking substantial pay rises amid a cost of living crisis. The teachers’ union is pressing the government for annual salary increases over the next two years which would roughly take their average monthly salary from 400 euros now to about 700 euros in 2024. The centre-left government has ruled out any new salary increase for teachers this year.

Poland and Slovenia will host this year men’s volleyball world championship scheduled for Aug. 26-Sept. 11 after Russia were stripped of the event, Polish Prime Minister Mateusz Morawiecki said on Thursday. The international volleyball federation (FIVB) stripped Russia of the tournament in March after its invasion of Ukraine, which Moscow says is a “special operation”. “Russia were supposed to be the hosts of the volleyball world championships, but can you imagine that everyone would listen to the Russian anthem as if nothing had happened,” Morawiecki said. “This is why we protested against it.”

Kazakhstan has lifted restrictions at its land borders with Russia, Kyrgyzstan, and Uzbekistan, ending unprecedented curbs on nonessential travelers in place since March 2020 to address the Covid-19 pandemic. The restrictions were lifted as of April 11 for Kazakh and foreign citizens, as well as for individuals without citizenship, for crossing Kazakhstan’s state border with these three countries, authorities said. The reopening of land border crossings is welcome news for millions of migrant workers from Central Asia who travel to Russia for seasonal work. When the restrictions were in place, the migrants had to pay for costly air tickets to travel to Russia.

The green fiscal reform challenges faced by Bulgaria, Croatia, Poland, and Romania
How Mongolia, with a little help from Estonia, became tech’s next hidden gem 
Comment