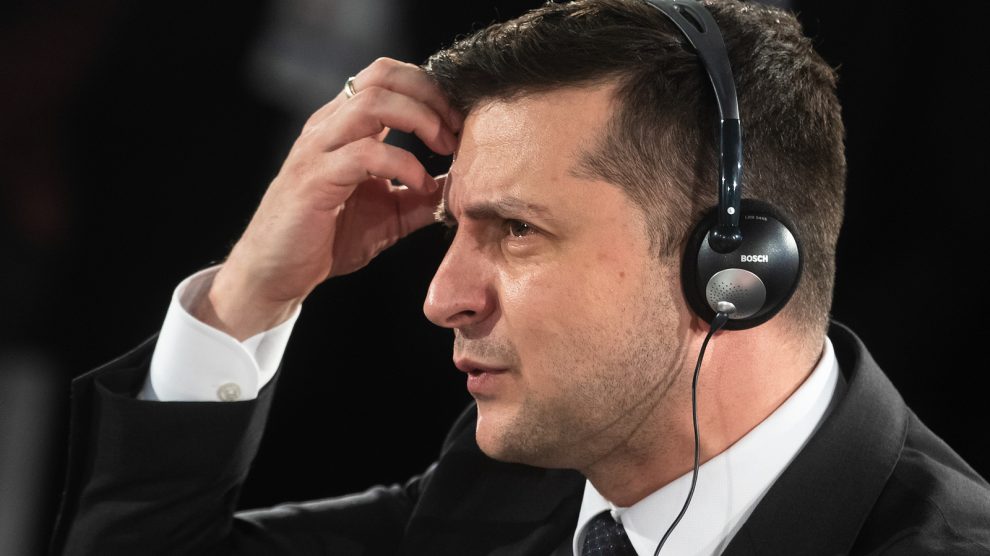 At the very least, the White House meeting on September 1 between Volodymyr Zelensky and Joe Biden served to stabilise relations between Ukraine and the United States after several years of uncertainty.

At the time Zelensky was elected president in 2019, Ukraine’s relationship with the United States was showing signs of strain, particularly after the former US president Donald Trump allegedly tried to coerce Zelensky into handing over incriminating information about the activities of Joe Biden’s son’s in Ukraine.

There was further tension earlier this year, when Biden gave the green light for Russia to complete its Nord Stream 2 gas pipeline, which Kyiv feels is a direct threat to its sovereignty.

The recent US withdrawal from Afghanistan has also raised questions about the country’s commitment to its allies.

The Washington summit gave Zelensky the opportunity to raise these concerns and seek reassurance from Ukraine’s most powerful ally, but little progress was made on some of the most pressing issues on Zelensky’s agenda, such as Nord Stream 2, Ukraine’s membership of NATO, and direct US involvement in the Donbas peace processes.

Here are some of the main takeaways from the meeting.

Zelensky told journalists in the weeks leading up to the summit that one of his main goals was to get a firm, unequivocal yes or no about Ukraine’s prospects for NATO membership.

He was not successful.

The joint statement released after the summit barely mentioned NATO, beyond a vague statement of US support for Ukraine’s “right to decide its own future foreign policy course, free from foreign intervention”.

White House press secretary Jen Psaki simply repeated the long-held stance of the Biden administration when asked about the topic, stating that “NATO’s door is open to aspirants”, before adding that “there are steps that aspirant countries like Ukraine need to take in order to meet NATO standards”.

This was in essence identical to the position set out by Secretary of State Antony Blinken during his visit to Kyiv earlier this summer, and dozens of US diplomats, lawmakers and politicians before him. Although Zelensky posited to journalists after the summit that Biden “personally supports” Ukraine’s NATO aspirations, this hardly represents a strong indicator of any change in US policy on the matter.

Washington and Kyiv released a joint statement reiterating that the two sides “continue to oppose Nord Stream 2” which they view as “a threat to European energy security”. However, with the pipeline on the cusp of completion, the United States’ objections appear to be of only symbolic value.

Biden’s decision to waive sanctions on the main firm involved in the construction of the pipeline can be interpreted as a tacit acceptance of the notion that there is little Washington can do to stop the project from being completed, particularly when several of its European allies support it. And despite Ukraine’s understandable concerns about what it means for Ukraine’s security, there is no indication that there will be a last-minute change in US policy on the matter.

Biden did use the summit to pledge action if the Kremlin begins using the pipeline as a geopolitical weapon, but this was hardly news.

Instead of stating concrete policies that would be taken to address the pipeline, the joint statement of the two leaders simply posited that the two governments “support efforts to increase capacity for gas supplies to Ukraine from diversified sources” – a vague and unclear statement that indicates more of a preferential course than a concrete policy.

As such, Ukraine is in the same position it was in before the summit – powerless to stop Nord Stream 2’s completion, but reassured by its western allies that it will not be harmed by the development. How much this reassurance will assuage Kyiv’s fears, however, is unclear.

One of the few tangible benefits Zelensky took away from Washington was a brand-new military aid package worth 60 million US dollars.

The package includes Javelin anti-tank missiles, one of the most sophisticated infantry weapons in the United States’ military arsenal and which has long been highly coveted by the Ukrainian military for its ability to counteract Russia’s enormous tank fleet.

Securing the military aid is vital for the Ukrainian military’s revitalisation. The war with Russia in 2014 exposed serious flaws within the structure and personnel of the Ukrainian armed forces, forcing it to often rely on poorly-disciplined if well-motivated militias to do its fighting. As such, it is of huge importance that Ukraine get its military back on its feet to prevent such a debacle from occurring again.

The US military aid, alongside the dozens of advanced Turkish combat drones actively being procured, will make the Ukrainian army much more resilient, even in the event of open war with Russia.

However, these numbers become less significant when we consider that the US has already given Ukraine approximately 2.5 billion US dollars in military aid since 2014. As such, this latest package of aid, however welcome, is simply a continuation of previous policy – bar a brief interruption during the tail end of Trump’s presidency.

One eye-catching part of the two leaders’ joint statement was an announcement of judicial reform. Since Ukraine set off on its Euro-Atlantic course, a refrain regularly heard is that the country has to make substantial changes to bring its political, social and economic standards to the same level as the West, and crucial in this is judicial reform.

The joint statement reaffirmed Ukraine’s efforts to overhaul its judicial system and combat corruption. Furthermore, the statement contained a provision stating Ukraine’s commitment to fighting all kinds of discrimination, including, for the first time, protection of sexual minorities. Ukraine’s current legislation has virtually nothing on anti-LGBT+ discrimination, and a statement of intent of this sort is a major step in the right direction.