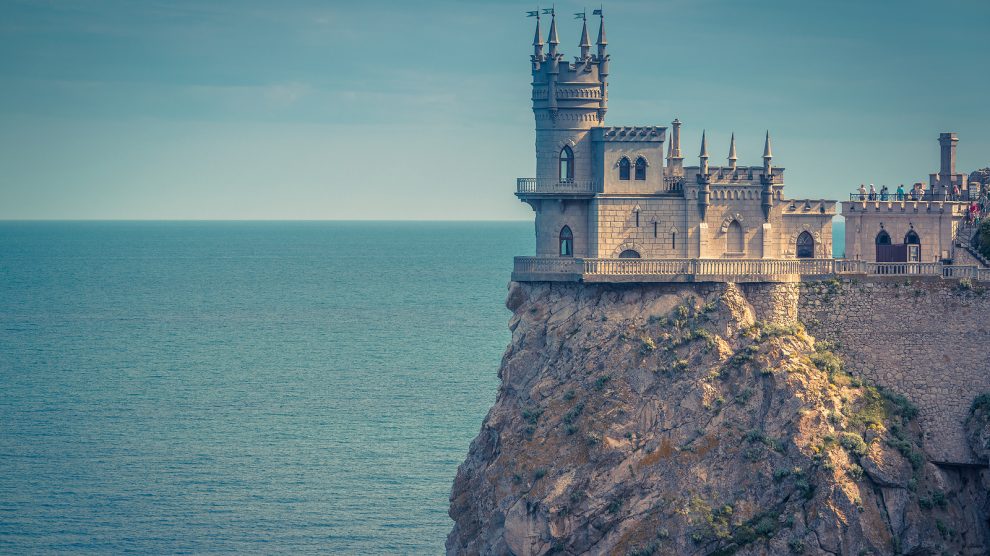 The war in Ukraine began with Crimea and must end with its liberation, Ukrainian President Volodymyr Zelensky said this week. Zelensky was speaking after a string of explosions hit a Russian airbase in the occupied peninsula on Tuesday.

At least eight Russian warplanes appear to have been damaged or destroyed in the attack, on Saky airbase, in stark contrast to Russian claims that none were damaged. Late on Wednesday Ukraine’s air force said at least nine Russian aircraft were destroyed on the ground following the explosions, which Russia said killed one person, wounded 14 and damaged dozens of nearby houses.

Kyiv has not publicly claimed responsibility for the attack, with an adviser to the president suggesting that partisans might have been involved.

Crimea is internationally recognised as part of Ukraine, but the peninsula was annexed by Russia in 2014 after a referendum which the global community condemned as illegitimate.

G7 nations are increasingly concerned about recent artillery and rocket fire around the nuclear power plant at Zaporizhzhia. Russian forces killed at least 13 civilians and wounded 11 others in an overnight missile attack on Tuesday, in an escalation of fighting around the plant.

The Russians used Grad missiles in the attack on the Nikopol district, across the Dnipro River from Zaporizhzhia.

The G7 said in a joint statement on Wednesday that the Russian attacks raise the risk “of a nuclear accident or incident” and endangers “the population of Ukraine, neighbouring states and the international community”.

The G7 has called on Russia to immediately hand back control of the plant to Ukraine.

The first grain ship to leave Ukraine under a UN-backed deal last week docked in Turkey on Wednesday, following a report that it has finally found a buyer for its maize. The Sierra Leone-flagged vessel Razoni left the port of Odesa on August 1 carrying 26,000 tonnes of corn and had been expected to dock in the Lebanese port of Tripoli last weekend.

But Ukrainian officials said the shipment’s five-month delay caused by Russia’s invasion prompted the Lebanese buyer to cancel the deal once the ship was already at sea.

The UN said that it now expects to see a “big uptick” in applications for ships to export Ukrainian grain after transit procedures were agreed upon by Russia, Ukraine, Turkey and the United Nations.

The number of inbound vessels is expected to “grow in the near future” as grain deals are made, said Frederick Kenney, interim UN coordinator at the Joint Coordination Centre for the Black Sea Initiative.

The EU banned coal imports from August 10 as part of a sanctions package against Russia that was announced in April, was one of the first to take direct aim at Moscow’s energy industry.

The European Commission’s chief spokesman Eric Mamer said last week in Brussels that he expected member states to stick to the sanctions, seeing as their leaders had unanimously agreed on them at the European Council.

Kosovo is prepared to stand against a possible attack by Serbia as worsening strife with minority Serbs could result in a new armed conflict, Prime Minister Albin Kurti told Reuters in an interview on Wednesday. Tensions between Serbia and Kosovo flared again earlier this month when Pristina said it would oblige Serbs living in the north, who are backed by Belgrade and do not recognise Kosovo institutions, to start using license plates issued in Prishtina.

Tensions between Poland and the European Commission flared up this week after leaders of the Polish conservative governing party accused Brussels of failing to fulfil its obligations to Warsaw and threatened retaliation. A Commission spokesperson responded on Tuesday that Poland still has not done enough to ensure the democratic principal of judicial independence. The Commission has blocked billions of euros in pandemic recovery funds to Poland, arguing that the country’s government is eroding democratic norms.

Russian oil pipeline flows resumed to Central Europe on Wednesday, ending a six-day halt, after Hungarian group MOL paid transit fees owed to Ukraine, providing a temporary solution to the latest disruption of Russian energy supplies. MOL said oil was again flowing through the southern branch of the Druzhba, or Friendship, pipeline, that it had reached Slovakia and should reach Hungary on Thursday. Oil flows, however, are not expected to resume to Czechia.

Hundreds of people took part this week in a second protest to demand Bulgaria continue a path toward gas independence from Russia. The protesters gathered in front of the presidential building in Sofia and said they want the country’s current caretaker government to reject Russian gas and maintain the policies of the pro-Western former government. Atanas Sharkov, one of the protest organisers, insisted that Gazprom must cease to be Bulgaria’s only gas supplier.

Moldova cannot afford to pay for natural gas from Gazprom in August and will have to hope for a deferral, the head of its state gas company was quoted as saying on Wednesday. Moldova and Gazprom agreed a five-year contract that began on November 1 last year and requires a prepayment by the 20th of each month. “I can tell you right now that we are unable to pay,” Moldovagaz Chairman Ion Ceban told the Moldovan news site NewsMaker. “We will cover July, but we cannot make the advance payment for August. That is clear.”

Armenian authorities say that in October they will conduct the Caucasus nation’s first census in more than a decade and only its third since post-Soviet independence, following two postponements due to the Covid-19 pandemic. Questionnaires will be filled out electronically for the first time. Prime Minister Nikol Pashinyan’s government announced that census-taking will take place from October 13 to October 22, with its results to be summarised within a year.

Kyrgyzstan’s president has given final approval to the creation of a park for creative industries that the government hopes will attract professionals working in IT, cinema, music and design through tax breaks. The incentives approved by Sadyr Japarov will cover 20 different types of activities and will extend to foreign companies and businesspeople as well as those from Kyrgyzstan. The primary criterion is that entities based at what will be known as the Creative Industries Park should show that 90 per cent of their operations are based around creative activities.

UN experts on Wednesday denounced a decision by Belarus to withdraw from an international agreement that upholds people’s right to access information, as well as justice, in environmental matters. The Aarhus Convention, adopted in 1998, also requires that individuals exercising these rights are not persecuted, penalised or harassed for doing so. Belarus’s President Alexander Lukashenko signed a decree on July 18 effectively ending the country’s participation. Withdrawal is scheduled to take effect on October 24.

Dua Lipa was last Friday made an Honorary Ambassador of Kosovo in a ceremony at the Office of the President in Prishtina. The singer, 26, was born in London to Albanian parents but spent much of her childhood in the Balkan state. Lipa moved to Prishtina with her family after Kosovo declared independence in 2008, but returned to London at the age of 15 to pursue a career in music. The award-winning pop star said it was an “honour and a privilege” to represent her home country and promised to use her platform to “make a difference” to the independent nation.