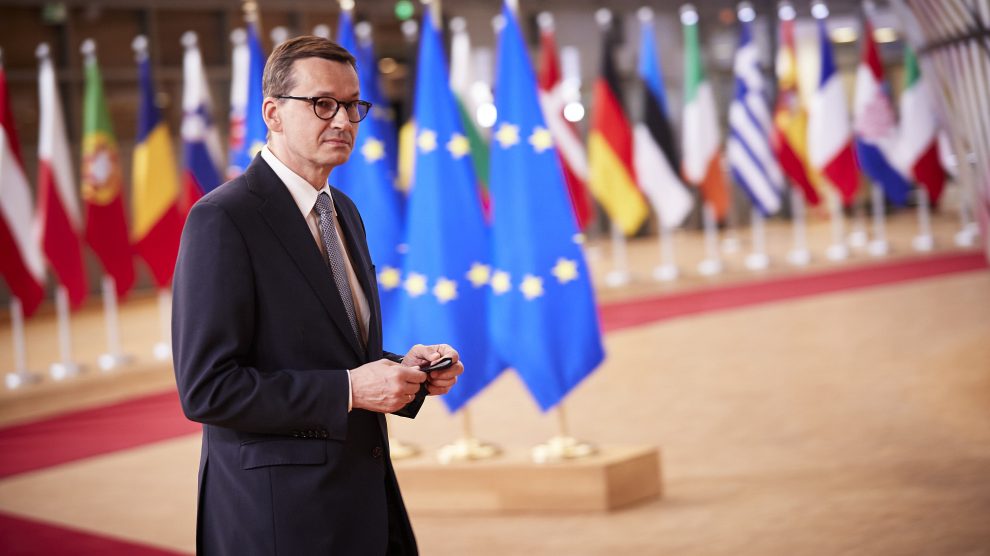 Poland’s top court on Thursday ruled that the country’s constitution overrides some European Union laws, escalating a conflict over democratic standards that endangers the government’s ability to access 36 billion euros in Covid-19 recovery funds. The judgment could be used by Poland’s government to bypass common rules that underpin the functioning of the EU and follows years of increasingly bitter disputes over the independence of courts, media freedom and LGBTQ rights. “The primacy of constitutional law over other sources of law results directly from the Constitution of the Republic of Poland,” government spokesman Piotr Muller wrote on Twitter. “Today (once again) this has been clearly confirmed by the constitutional tribunal.”

Czech Prime Minister Andrej Babiš is heading into a parliamentary election this week hit by yet another scandal that links him and hundreds of other wealthy people to offshore accounts. According to the so-called Pandora Papers, in 2009, Babiš, a billionaire, put 22 million US dollars into shell companies to buy 16 properties in southern France, including a chateau. Babiš has denied any wrongdoing and alleged that the recent revelation was meant to harm him in the election, set for October 8-9, which his ANO party is expected to win with about 25 per cent of the vote.

Romania’s government lost a motion of no confidence on October 5, just hours after the country recorded its highest ever number of new Covid-19 cases. In the no confidence vote, put forward by opposition the Social Democrats (PSD), the largest party in parliament, 281 of Romania’s 436 MPs opted to dismiss Prime Minister Florin Cîțu. Romanian President Klaus Iohannis must now nominate a new prime minister, but has said that he will not do so until at least next week, despite growing concerns that the spread of Covid-19 is now out of control amid a vaccination campaign that lags far behind most of Europe.

Slovakia reported 1,971 new coronavirus cases on Wednesday, the highest daily tally since March 23, amid a surge of infections largely among unvaccinated people. The health ministry said three quarters of the cases confirmed by PCR testing were among people who had not been vaccinated. About 52 per cent of the Slovak adult population is fully vaccinated compared with an overall rate of 74% in the EU, according to data from the European Centre for Disease Prevention and Control (ECDC).

Bulgaria’s economy is expected to rebound with growth of four per cent this year and accelerating to 4.9 per cent in 2022, the finance ministry said in its autumn macroeconomic forecast on Wednesday. The small and open economy contracted by 4.2 per cent in 2020 when the coronavirus pandemic hit jobs and businesses. The ministry said strong domestic demand in the first half of 2021 has prompted it to increase its GDP growth forecast from an earlier estimate of 3.5 per cent. Strong public and private investment, bolstered by expected hefty inflows from the European Union’s coronavirus recovery fund, and an improved economic environment will further boost growth in 2022, it said.

Georgia’s ruling party won a commanding lead in a municipal election held a day after the arrest of former president Mikheil Saakashvili, who had returned from exile to support the opposition. The ruling Georgian Dream party won 46.7 per cent of the votes to 30.7 per cent for the United National Movement (UNM), founded by Saakashvili. The election was overshadowed by the return and arrest of Saakashvili, president from 2004-07 and 2008-13, who had been living in exile and was convicted in absentia in 2018 of abuse of office. Prime Minister Irakli Garibashvili said on Sunday that Saakashvili would now serve his full term of six years in prison.

Moldova’s opposition-appointed top prosecutor has been suspended and detained for alleged corruption. Prosecutor-General Alexandru Stoianoglo was taken to a pretrial detention facility in the capital, Chișinău, on October 5 after masked men from the country’s intelligence and security service searched his office and home. Anti-corruption prosecutor Victor Furtuna said Stoianoglo was accused of abuse of office, exceeding official duties, corruption, and making false statements. President Maia Sandu defeated her Moscow-backed predecessor Igor Dodon in an election last November on a platform of reforms and tackling corruption as she seeks to bring Moldova closer to the West. Stoianoglo was appointed in 2019 by Dodon.

Belarus‘ parliament has voted to suspend an agreement with the European Union to take back migrants. Lawmakers decided on Monday to halt the obligation on Belarus to re-admit migrants that crossed its territory into the EU. The vote in the upper house of the Belarusian parliament formalises the move that was announced by Belarusian President Alexander Lukashenko in June. Interior Minister Ivan Kubrakov described the suspension of the agreement as a “temporary measure” and said that migrants would be readmitted once “relations normalise”. Lukashenko and his officials say the measure is part of Belarus’ response to the EU sanctions on Minsk.

The operator of Russia’s Nord Stream 2 has begun filling the controversial Baltic Sea pipeline to Germany with gas. Nord Stream 2 AG, a Switzerland-based company owned by a subsidiary of Russian gas giant Gazprom, said in a statement on October 4 that the first string of the pipeline would be gradually filled to build inventory and pressure. The Nord Stream 2 project is designed to carry Russian gas directly to Germany, bypassing land routes through Ukraine and depriving Kyiv of as much as two billion US dollars a year in transit fees.

Turkey and Azerbaijan have launched joint military drills as the two nations expand defence ties in the wake of last year’s war against Armenian forces over the disputed Nagorno-Karabakh region. The “Unshakable Brotherhood” exercise running from October 5 to October 8 comes amid heightened tensions between Baku and Teheran, with Iran launching rare war games along its border with Azerbaijan in recent days. Azerbaijan and Iran have long been at loggerheads over Tehran’s backing of Armenia, but normally friendly relations began to deteriorate following joint military drills that Azerbaijani troops conducted alongside their Turkish and Pakistani counterparts last month.

Estonia is developing its defence capacities in response to Russia’s actions in the region, with multiple launch rocket systems (MLRS), air defence systems, coastal missile defence systems as well as unmanned and cyber defence capabilities ranking high in its acquisition plans, according to Estonian Defence Minister Kalle Laanet. “Last May, we announced that, together with our neighbours Latvia and Lithuania we will buy the MLRS for our militaries,” Laanet told Defence News during the first day of the Warsaw Security Forum. “My opinion is that the Baltic states should have common capabilities to fight, but also deter any aggressor, so that they have to take us seriously.”

The European Union has pledged nine billion euros for the Western Balkans as part of a new economic and investment plan but political divisions over the prospect of accession remain entrenched. The new commitment comes as European leaders met Slovenia for an EU-Western Balkans summit that was also attended by the heads of government of Albania, Bosnia and Herzegovina, Serbia, Montenegro, North Macedonia and Kosovo. The final communiqué of the meeting reaffirmed the EU’s “unequivocal support for the European perspective of the Western Balkans” but set no specific deadline or time limit.

A Prishtina court jailed a former Serbian police officer for 20 years for his part in the murder of 13 ethnic Albanian civilians during the 1990s Kosovo war. A court statement on Tuesday said he had been part of a “large-scale and systematic attack” carried out in 1999 by Serbian police and paramilitary forces against the ethnic Albanian civilians in Sllovi and the neighbouring village of Terbovc, located 25 kilometres bsouth of Prishtina, Kosovo’s capital. The court referred to him only by the initials GS, but the Kosovar media identified him as Goran Stanisic.

Several thousand people rallied last Saturday in the Bosnian town of Banja Luka against the government in Serb-dominated part of the Balkan nation. The protesters accused the ruling party of nationalist leader Milorad Dodik of crime and corruption, including in the procurement of ventilators and other equipment during the coronavirus pandemic. The town´s mayor, Drasko Stanivukovic, who is an opposition leader, said “we are launching a struggle against the private state!”, adding: “This is not a protest, this is an uprising!”

Authorities in Kyrgyzstan say they have held talks with the country’s largest private investor for the first time since seizing its flagship Kumtor gold mine in May. Problems piling up at the high-altitude mine, plus trouble unloading bullion on international markets, may have forced Bishkek to the table. The negotiations, which reportedly took place from September 28-30 in Geneva, have not been confirmed by Centerra Gold, the Toronto-listed company that owns Kumtor. The day before, Centerra had accused Kyrgyzstan of all but running Kumtor into the ground by eschewing safety protocols and focusing on quick profits.

The family of a Turkmen district governor says he has died of the coronavirus as the secretive Central Asian nation’s authorities continue to deny the presence of the coronavirus in the country. Toily Atajanov, the 40-year-old governor of Sakarchage district in the southeastern Mary Province died on October 4 from complications caused by Covid-19, relatives told an RFE/RL correspondent.