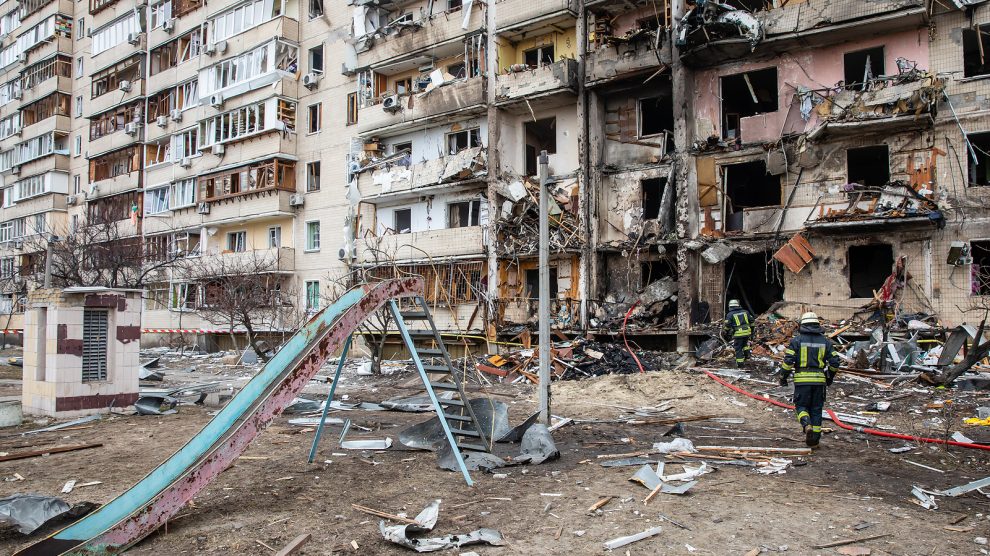 Ukraine’s defence lines were holding against the Russian attack, the country’s president, Volodymyr Zelensky, said on Thursday, despite continued shelling of major towns and cities.

Since invading Ukraine on February 24 in the expectation of a quick victory, Russian forces have failed to take any major urban areas with the exception of Kherson, close to Crimea, their advance slowed by fierce resistance, poor logistics, and broken supply lines.

While maintaining their position that they cannot and will not become directly involved in the war, most NATO members have sent large quantities of defensive weapons to Ukraine. Non-NATO members including Sweden and Finland have also offered materiel support for Ukraine’s armed forces.

More than one million Ukrainian refugees have fled the fighting for neighbouring Poland, Romania, Slovakia, Hungary, and Moldova.

On Monday, Ukraine formally filed an application to join the European Union, Zelensky telling Brussels that he wanted membership “immediately” under a special procedure. While this is unlikely to happen, the application is a firm statement of intent that Ukraine’s path is irreversibly westbound. On Thursday, Georgia (invaded by Russia in 2008; Moscow continues to occupy a fifth of the country) also filed a formal application for EU membership. Moldova is likely to follow suit today (March 4).

In response to the invasion harsh economic, sporting, and cultural sanctions have been imposed on Russia, isolating it from much of the world. A ban on Russian airlines entering the airspace of the European Union, the UK, the US, and Canada has grounded most international flights, while several Russian banks have been cut off from the SWIFT financial messaging system. The company behind Russia’s gas pipeline project Nord Stream 2 has been forced to file for bankruptcy. Fitch and Moody’s cut Russia’s credit rating to “junk”.

Russian sports teams have been kicked out of international competitions, including the FIFA World Cup.

Kosovo’s parliament approved a resolution on Thursday asking the government to start negotiations on NATO membership following Russia’s invasion of Ukraine. Kosovo has been guarded by NATO troops since 1999 when a war between ethnic Albanians and Serb forces ended, but the country of 1.8 million people now wants to join the alliance. Serbia – which continues to claim that Kosovo is a Serb province – remains one of few European countries not to have imposed any sanctions against Russia.

Poland will raise spending on its armed forces more than planned, the government said on Thursday, as the Russian invasion of neighbouring Ukraine focuses attention on Warsaw’s defence capabilities. Moscow’s assault on Ukraine has shaken NATO-member Poland, where memories of Soviet domination after World War II run deep.

Romania should also raise its defence spending, to 2.5 per cent of gross domestic product from two per cent now following Russia’s invasion of Ukraine, President Klaus Iohannis said on Tuesday.

Armenian lawmakers this week elected Vahagn Khachatrian as the country’s new president following the sudden resignation of Armen Sarkisian in January. The former minister of high-tech industry won 71 votes in the second round of balloting among lawmakers on Thursday, seven more than needed despite a boycott of the vote by opposition factions. Though he has no party affiliation, Khachatrian was supported by deputies from Prime Minister Nikol Pashinyan’s ruling Civil Contract party.

Estonia has overtaken Poland to become the most competitive IT ecosystem in Central and Eastern Europe and Central Asia, a new edition of a landmark report, Future of IT, published by Emerging Europe this week has revealed. Czechia closes out the top three. Kosovo meanwhile saw the most significant improvement, climbing nine overall positions to tenth, while Hungary experienced the biggest drop – down six positions to ninth. Bosnia and Herzegovina has the least competitive IT sector in the region.

Payhawk, a payment and expense solution with offices in London, Sofia, Berlin, and Barcelona, has raised an additional 100 million US dollars to extend its Series B round to 215 million US dollars. The new funding was raised at a valuation of one billion US dollars, making Payhawk the first ever Bulgarian company to achieve unicorn status.