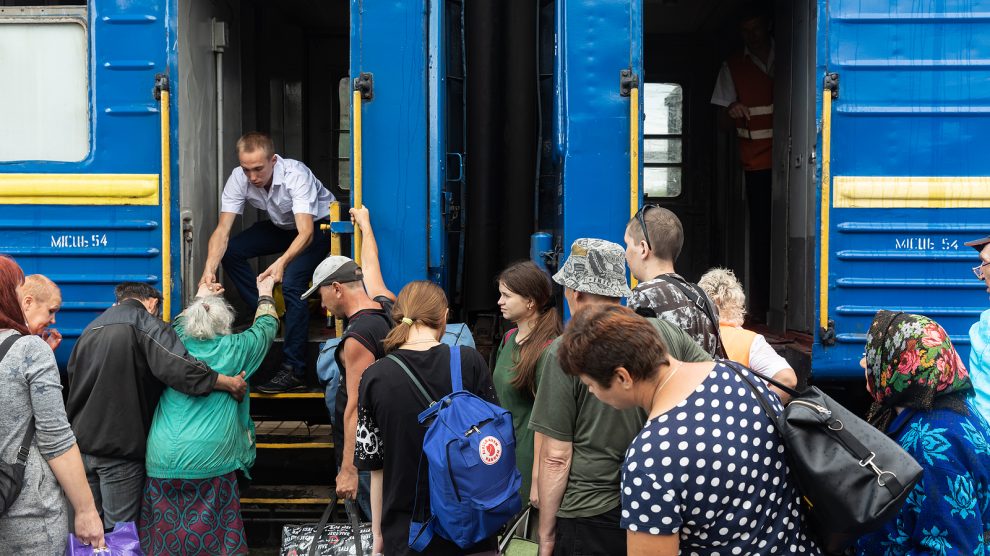 Ukraine’s government this week advised refugees living abroad not to return until the spring amid mounting fears over whether the country’s damaged energy infrastructure can cope with demand this winter.

The energy crisis comes as officials in Kyiv warned that the coming winter may herald the heaviest fighting of the war, around the southern city of Kherson where Russian forces have been digging in.

On Tuesday, Kyrylo Budanov, the Ukrainian intelligence chief, said that Russia is sending more troops into Kherson and may be preparing to defend it. Ukraine had previously suggested some Russian units might be leaving.

Russia took Kherson in the early days of the war, but has recently come under pressure as Ukrainian troops advance along the Dnipro River. Russian authorities in the city have over the past week ordered thousands of civilians to evacuate.

Ukraine has meanwhile boosted its forces in the northern region near Belarus to counter any possible renewed Russian attack across the border, the deputy chief of Kyiv’s general staff, Oleksii Hromov, said on Thursday.

“At the current time the creation of a strike force [in Belarus] is not observable. [But] there are and will be threats. We are reacting, we have already increased our troops in the northern direction,” he said.

In the capital Kyiv, a new timetable of scheduled blackouts will be introduced over the coming days, after Iranian drones caused more damage to energy infrastructure this week.

The new timetable is designed to prevent uncontrolled blackouts and will be stricter and longer than those recently announced by Ukrenergo, Ukraine’s state energy company.

On Wednesday, Russia’s strategic nuclear forces carried out annual exercises, firing ballistic and cruise missiles from the Arctic to Russia’s Far East. The United States was told about the drill under the terms of the New Start arms treaty. The last Russian nuclear drill took place five days before it invaded Ukraine.

The launches took place as Russia makes unsubstantiated claims that Ukraine was plotting to use a “dirty bomb”. Kyiv has responded by saying that the claims indicate Moscow itself could be preparing such an attack.

Russia’s Ambassador to the United Kingdom Andrey Kelin told CNN on Wednesday that Moscow will not use nuclear weapons in Ukraine.

The Serbian parliament appointed a new government on Wednesday whose main priorities will be investment in energy infrastructure and membership in the European Union. The new cabinet will be led by Ana Brnabić who also served as the prime minister in the previous two terms. It will have 28 ministers, mainly from the ruling conservative Serbian Progressive party (SNS) and its ally the Socialists (SPS).

Kosovo will defy calls by Western countries for a 10-month delay in the implementation a rule under which ethnic Serbs switch their car licence plates to local ones, Kosovo’s prime minister said on Tuesday, in a move that could aggravate ethnic tensions. Kosovo’s main backers, the United States and the European Union, have publicly asked Prime Minister Albin Kurti to delay the rule for 10 months. The government had given Serbs 60 days from September 1 – terminating at the end of October – to get the new plates.

Romanian Defence Minister Vasile Dincu was forced to resign this week after being criticised by the country’s president Klaus Iohannis for stating that Ukraine’s only chance to end the war was to negotiate with Russia. “My gesture [resignation] comes as it is impossible to cooperate with the Romanian president, the army’s commander-in-chief,” Dincu said in a statement.

Hungarian Prime Minister Viktor Orbán made veiled comparisons on Sunday between the Soviet troops that attacked Hungary during the 1956 revolution and the institutions of the European Union today. Marking the 66th anniversary of that crushed uprising, Orbán suggested that the EU, which has sought to rein in democratic backsliding in Hungary, would end up like the Soviet Union, which dissolved more than three decades ago.

The United States has targeted nine individuals and 12 entities for sanctions over what the US Treasury Department said was “systemic corruption” in Moldova and their efforts to influence elections in the country. The individuals and entities designated for sanctions include two Moldovan oligarchs – Vladimir Plahotniuc and Ilan Shor – who are already widely recognised for corrupting Moldova’s political and economic institutions, the Treasury Department said on Wednesday.

More than 20 activists and politicians are languishing in prison cells in Kyrgyzstan after a crackdown threatened a fresh cycle of turmoil in Central Asia’s most restless country. The raids on Sunday targeted an array of public figures from former security bosses to rights advocates who had one thing in common – their opposition to a controversial border deal with Uzbekistan. Any such border agreement would be a landmark for two countries whose leaders could barely stand to be in the same room less than a decade ago. But it would require Kyrgyzstan to cede control over a strategic reservoir called Kempir-Abad.

Thousands of protesters rallied in the Czech capital Prague on Wednesday to honour two gay men who were shot dead outside a bar in neighbouring Slovakia. Demonstrators have called for more protection for the LGBTQ community and their families following the shooting. The gathering in the Czech capital’s Wenceslas Square was held on the same day as the funerals of Matúš Horváth and Juraj Vankulič in Slovakia. The two Slovaks were killed two weeks ago in front of a popular bar in Bratislava.

Questions have been raised in Poland after French President Emmanuel Macron gifted Pope Francis an antique book that, it later transpired, was stamped with the name of a former Polish academic society. Some have wondered if the item was among the hundreds of thousands of cultural artefacts looted from Poland during the Nazi German and Soviet occupations of World War II. One commentator accused Macron of “dealing in stolen goods”.