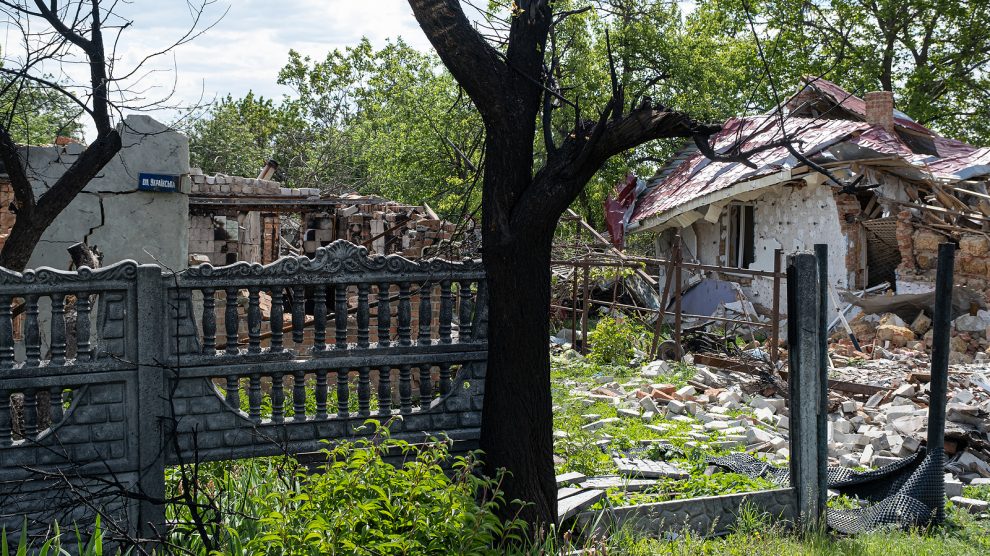 Ukraine’s counter-offensive in Kherson is gathering momentum, according to the UK Ministry of Defence. In an intelligence report issued on Thursday, the ministry said that Ukrainian forces have “highly likely” established a bridgehead south of the Ingulets River, which forms the northern boundary of Russian-occupied Kherson. Ukraine has used its new long range artillery to damage at least three of the bridges across the Dnipro River, bridges on which Russia relies upon to supply the areas under its control. According to the report, Russia’s 49th Arm, stationed on the west bank of the Dnipro River, now looks “highly vulnerable”.

On Thursday morning, Russia launched a barrage of 25 missiles at northern regions of Ukraine from neighbouring Belarus. The early morning missile strikes targets in the Chernihiv region – including an apartment block – as well as locations outside Kyiv and around the city of Zhytomyr, according to Ukrainian officials and Belarusian opposition figures.

The strikes came as Ukraine began celebrating Statehood Day, a new annual holiday that President Volodymyr Zelensky introduced last year. In a national message, Zelensky said, “Restless morning. Again – missile terror. We will not give up. We will not give up. Do not intimidate us. Ukraine is an independent, free, indivisible state. And it will always be like that.”

Russian forces have taken over Ukraine’s second-biggest power plant and are conducting a “massive redeployment” of troops to three southern regions, a Ukrainian presidential adviser has said, amid expectations of a Ukrainian counter-offensive. Oleksiy Arestovych, an adviser to Zelensky, confirmed the capture of the coal-fired Vuhlehirska plant in the Donetsk region on Thursday, but said it was only a “tiny tactical advantage” for Russia.

Zelensky on Thursday confirmed experienced investigator Oleksandr Klymenko as the head of Ukraine’s Specialised Anti-Corruption Prosecutor’s Office, responding to a European Union request as it seeks EU membership. “The fight against corruption is a priority for our state, as our investment attractiveness and business freedom depend on its success,” Andriy Yermak, the head of Zelensky’s presidential office, wrote on Telegram.

A British YouTuber was this week sanctioned by the UK government over claims that he has spread pro-Russian propaganda during its invasion of Ukraine. Graham Phillips was condemned in April for filming an interview with captured British national Aiden Aslin. He was banned from Ukraine in 2014, but managed to return to the country shortly after Russian forces launched their invasion in February. He is one of 42 people named in the latest round of sanctions. They include leaders of the so-called Donetsk and Luhansk People’s Republics and 29 regional governors across Russia.

Ukraine’s envoy to Turkey expressed “sadness” over a chant of “Vladimir Putin” that rang out at a Champions League qualifying round football match in Istanbul on Wednesday night. Images on social media showed a section of Fenerbahce supporters singing the Russian president’s name in response to Dynamo Kyiv’s first goal against the Turkish team. “It is very sad to hear the words of support from Fenerbahce’s fans for a Russian murderer and aggressor who bombed our country,” Ukraine’s ambassador Vasyl Bodnar tweeted. Dynamo won the game 2-1.

The UK will host the Eurovision Song Contest next year after organisers decided it could not be held in winning country Ukraine due to the ongoing war. Oleh Psiuk, the lead singer of 2022 winners Kalush Orchestra, expressed his gratitude to the UK for holding the event “in support of our country”. The UK, which has hosted Eurovision eight times, was chosen after Sam Ryder came second in this year’s contest. Several UK cities have already expressed interest in hosting.

One of Viktor Orbán’s longest-serving advisers resigned this week after the Hungarian prime minister spoke out against “peoples of mixed race” in a speech condemned by Jewish groups. Zsuzsa Hegedus quit on Tuesday in response to a speech Orbán delivered on Saturday in a region of Romania with a large Hungarian community. “We are willing to mix with one another, but we do not want to become peoples of mixed race,” Orbán told the crowd, adding that mixing between Europeans was “acceptable”.

Bulgaria’s Socialist party has renounced plans to propose a new coalition government after failing to form a majority in parliament, a development that promises fresh elections in the autumn. President Rumen Radev will now have to appoint an interim government before fresh elections can be held, most probably in October. The Socialists had made a third and final go in the bid to form a government after the coalition government of pro-Western reformist Prime Minister Kiril Petkov resigned last month following a no-confidence vote.

Celebrations have been taking place in Croatia to mark the opening of a long-awaited bridge that bypasses a narrow strip of Bosnian coastline to connect its southern Adriatic region with the rest of the country. The Pelješac bridge stretches between Komarna on the mainland and Brijesta on the peninsula of Pelješac, providing easier access to Dubrovnik. Previously, both residents and tourists had to cross through Bosnia and Herzegovina when traveling to and from Southern Dalmatia, which meant they were subject to border checks.

Two liquefied natural gas (LNG) tankers being built in South Korea for Polish state gas company PGNiG will enter service in 2023, although they will fly the French flag, the state assets ministry has confirmed in a response to a parliamentary question. In total, the PGNiG group has ordered eight such gas carriers, as it seeks to boost supplies to Poland’s existing LNG terminal in Świnoujście and a planned new one in Gdańsk. Two more vessels will commence service in 2024 and a further four will be commissioned in 2025.

Kosovo this week signed a 237 million US dollars agreement with a United States government agency to boost its energy sector, promote women’s participation, and boost development. President Vjosa Osmani’s office on Thursday said the agreement with the Millennium Challenge Corporation (MCC) will help solve urgent issues in the energy sector that the country is facing. “Today, the USA through the MCC reaffirmed its steadfast support for our new republic and its willingness to help us advance further in terms of sustainable economic development,” said Osmani.

Container ports in south-eastern Europe are increasingly vulnerable to trafficking of illicit goods, according to a report released this week by the Global Initiative Against Transnational Organised Crime. Major busts of cocaine – usually concealed in boxes of bananas – in ports such as Durrës (Albania), Ploče and Rijeka (Croatia), and Thessaloniki (Greece) have aroused suspicion that south-eastern European ports are becoming more attractive for traffickers. This has been compounded by major seizures of heroin in the ports of Constanța (Romania), Koper (Slovenia) and Varna (Bulgaria) as well as the long-standing problem of cigarette smuggling, particularly through the ports of Bar (Montenegro) and Piraeus (Greece).

A ceremony was held on Wednesday to mark the start of renovation work on the main tower at the Staro Sajmište (Old Trade Fair) concentration camp, which operated under German Nazi control during World War II. “We are starting to restore the memory of the camp by starting to reconstruct the central tower, its iconic symbol,” Serbian President Aleksandar Vučić said in a speech at the ceremony. “The reconstruction of the central tower at the Staro Sajmište is a symbol of determination to reconstruct our own collective memory,” Vučić added. Some 10,000 Serbs, 7,000 Jews and at least 60 Roma died at Staro Sajmište in 1941 and 1942.

A large wildfire on the German-Czech border is spreading and threatening to destroy a forested national park popular with tourists. The fire in the region, called Bohemian Switzerland on the Czech side and the Saxon Switzerland national park on the German side, started last weekend. It had seemed to be under control but spread again early Thursday. Hundreds of firefighters on both sides of the border battled the flames with help from reinforcements from neighbouring Poland and Slovakia. Eight firefighting helicopters were working to douse the flames in the hilly and rocky region that is difficult to access and where about 250 hectares (618 acres) of forest were burning Thursday.

Tensions fray on the Serbia and Kosovo border, but war is not imminent
Romania’s biblical census
Comment