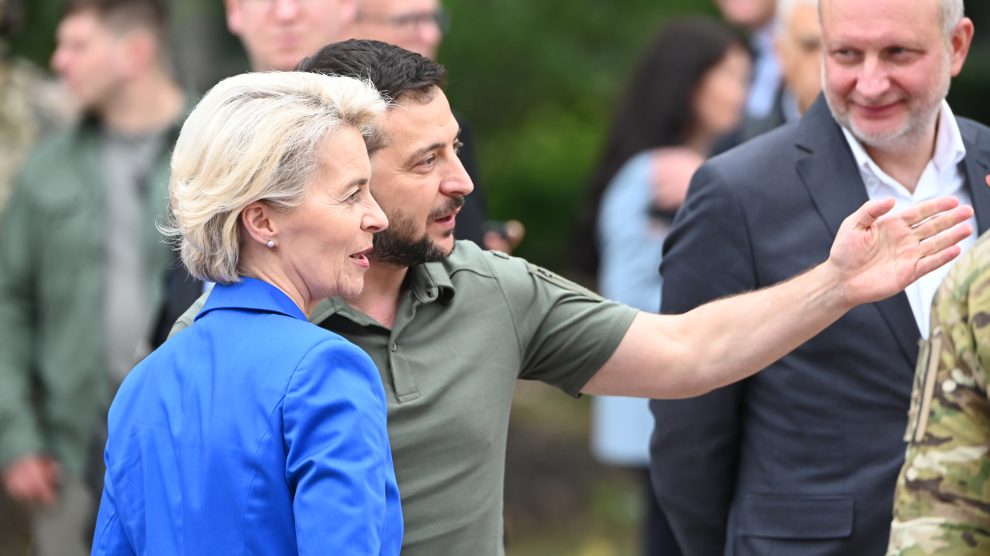 European Commission President Ursula von der Leyen on Thursday said she was impressed with the speed at which Ukraine is proceeding in its bid to become a member of the European Union.

“The accession process is well on track. It’s impressive to see the speed, the determination, the preciseness with which you are progressing,” von der Leyen said during a press conference in Kyiv with Ukrainian president Volodymyr Zelensky.

“To all member states: it’s absolutely vital and necessary to support Ukraine with the military equipment they need to defend themselves. They have proven that they are able to do that if they are well equipped,” she said. “This is the general recommendation to all member states.”

She also announced that the European Union has earmarked 150 million euros to aid internally displaced people in Ukraine get shelter through the winter, as well as 100 million euros for reconstruction and repair work for schools that have been damaged in the invasion.

Pope Francis on Thursday said it was morally legitimate for countries to provide weapons to Ukraine to help it defend itself from Russian aggression.

Speaking to reporters after returning from a three-day trip to Kazakhstan, Francis also urged Kyiv to be open to eventual dialogue, even though it may “smell” because it would be difficult for the Ukrainian side.

Ukraine’s military said on Thursday that Russian efforts to advance in Donetsk region continue but have been thwarted. It also claimed that some Russian units retreating in the Kharkiv region have been disbanded.

“The enemy continues to focus its efforts on attempts to fully occupy the Donetsk region. The enemy is shelling our positions along the contact line, is trying to take measures to regroup troops in separate directions,” the military said.

There has been little movement on the Donetsk front lines since late June.

The Polish delegation to the International Atomic Energy Agency (IAEA) in Vienna said the agency’s governing board has passed a resolution requesting the withdrawal of Russian forces from around the Zaporizhzhia nuclear power plant.

The delegation tweeted that the “Polish- Canadian IAEA resolution requesting withdrawal of Russian Armed Forces from Ukrainian Zaporizhzhia Nuclear Power Plant was adopted by great majority of Board of Governors’ members.”

More than 100 Armenian soldiers have been killed in border clashes with Azerbaijan since Monday, Armenian Prime Minister Nikol Pashinyan said on Thursday. Azerbaijan meanwhile claimed that 71 of its troops had been killed, in fighting which both sides blame on the other. It is the latest in a series of long-running conflicts fought between the two former Soviet republics over the disputed Nagorno-Karabakh region. Late on Wednesday evening Armenia said a truce has been agreed with Azerbaijan, although there has been no confirmation yet from Azerbaijan.

Hungary is no longer a “full democracy” and the EU needs to do everything to bring it back into line with European values, members of European Parliament declared on Thursday. The country should be considered a “hybrid regime of electoral autocracy” where elections are regularly held but without respecting democratic norms. The resolution is considered to be a powerful vote against Viktor Orbán’s government which has been in office since 2010 and held a two-thirds parliamentary majority for much of this time.

Measures aimed at freezing power prices for households and providing support for energy intensive companies will cost Poland over 30 billion zloty (6.35 billion US dollars), Prime Minister Mateusz Morawiecki said on Thursday. The country plans to freeze prices for households using up to 2,000 kilowatt-hours a year. In addition, a 10 per cent cut in electricity use will be rewarded with a 10 per cent price cut as an incentive to save energy. “Combined all these support measures are a huge cost, adding it all and including support for energy intensive companies tops 30 billion zloty,” Morawiecki told a news briefing.

Slovakia’s president Zuzana Čaputová on Tuesday swore in new ministers who replaced their predecessors from a junior coalition partner that withdrew from the governing four-party coalition, leaving Prime Minister Eduard Heger without a parliamentary majority. The appointments came after Čaputová accepted the resignation of all four ministers from the liberal Freedom and Solidarity party who resigned from their government posts earlier in September. They included party leader and Economy Minister Richard Sulik, Foreign Minister Ivan Korcok, Justice Minister Maria Kolikova and Education Minister Branislav Gröhling. Three were replaced by experts not affiliated with any political party.

Kosovo’s foreign minister announced during a televised interview on Wednesday that the small nation would seek candidate status within the European Union by the end of the year — a step that potentially lays the groundwork for its eventual integration into the body, but one that is unlikely to result in acceptance until a resolution of its ongoing issues with its northern neighbour Serbia. “We said we would apply this year, and we will apply this year,” Kosovar foreign minister Donika Gervalla-Schwarz told the nations’ KlanKosova television network.

Hedge funds trading Eastern European stocks and bonds are seeing their worst performance in eight years, weakened by the surge of global inflation, the strength of the US dollar and the war in Ukraine, the BarclayHedge Eastern European index shows. The index, which tracks the performance of hedge funds trading stocks and bonds in the region, has dropped by 22.65 per cent from the start of 2022 to the end of August. Another index by the same data provider, which follows fund managers trading only stocks in Eastern Europe, is down even further, by almost 32 per cent over the same time period.

Kazakh president Kassym-Jomart Tokayev has agreed to restore the former name of the country’s capital just three years after he renamed it in honour of his predecessor, his spokesperson said this week. Tokayev’s spokesman, Ruslan Zheliban, said the president agreed to the name change after an initiative by a group of MPs. One of Tokayev’s first moves upon taking office in 2019 after president Nursultan Nazarbayev stepped down was to call for Kazakhstan’s capital, Astana, to be dubbed Nur-Sultan instead.

The local organiser of an LGBT-pride march banned this week by Serbian authorities after pressure from religious and right-wing groups says EuroPride supporters will take to Belgrade’s streets on September 17 despite the ban. Marko Mihailovic also told an Instagram livestream with RFE/RL’s Balkan Service on September 15 that his group has filed an appeal with a Serbian administrative court against the Interior Ministry’s decision to block the event. “The question is whether it will be a short walk or whether we will stand in one place, but we will go out into the streets,” Mihailovic said. “It is important that we go out and that our voice is heard.”