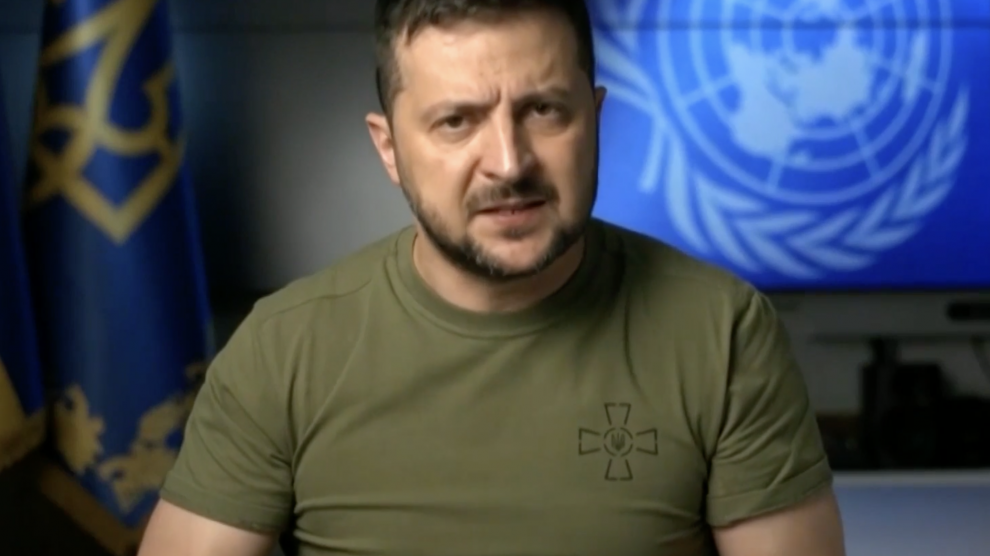 Ukrainian President Volodymr Zelensky told the UN General Assembly on Wednesday that Ukraine wants peace and justice, laying out a set of five non-negotiable conditions for an end to the war.

The word “punishment” cropped up some 15 times in Zelensky’s pre-recorded speech, and was the first of his five non-negotiable conditions for peace. Russia must face consequences for its aggression, he said, through further sanctions and by the UN stripping Moscow of its powerful role as a permanent Security Council member.

“A special tribunal should be created to punish Russia for the crime of aggression against our state. Russia should pay for this war with its assets,” the Ukrainian president said. He also called for Ukrainian lives to be protected, and for the country’s internationally-recognised borders to be respected.

As his fourth and fifth conditions, he called for new security guarantees for Kyiv, and for the world to unite in calling out Moscow’s armed aggression.

Earlier on Wednesday, Putin called up 300,000 reservists for duty and again suggested that he was ready to use nuclear weapons should Russia’s “territorial integrity” be threatened. Russia will this weekend organise a series of what it calls “referenda“ in four occupied Ukrainian counties, which is likely to lead to their immediate formal annexation by Moscow, following a model used in Crimea in 2014.

Zelensky said the partial mobilisation and nuclear threats were proof that his enemy was not serious about peace talks. In his own speech at the UN, US President Joe Biden denounced Vladimir Putin’s threats to use nuclear weapons as “reckless” and “irresponsible” and called Russia’s planned annexation of more regions of Ukraine as “an extremely significant violation” of the UN charter.

The partial mobilisation will not generate significant extra combat capability for months, the Institute for the Study of War wrote in its latest report on Thursday.

The think tank’s analysts also believe Putin comments about nuclear weapons did not mean he would use them to defend annexed areas of Ukraine.

On Thursday, Ukraine announced that 215 Ukrainian and foreign citizens have been released by Russia in a prisoner exchange, including fighters who led the defence of Mariupol’s Azovstal steelworks that became an icon of Ukrainian resistance.

Russia received 55 prisoners in exchange, including Viktor Medvedchuk, a former Ukrainian MP and ally of Putin. Medvedchuk was arrested in April, after escaping house arrest on treason charges days after the Russian invasion.

Astana has closed a loophole that was allowing Russian and Belarusian truckers to bring European Union cargo across Russia to Kazakhstan without the correct paperwork. The clampdown comes as Kazakhstan continues efforts to comply with international sanctions against Russia and Belarus – fellow partners in the Eurasian Economic Union (EAEU), a free trade zone – to avoid Western countries targeting Kazakhstan with secondary sanctions. Kazakh customs officials have halted on the border at least eight Russian articulated trucks carrying goods from the EU this week, according to the Russian newspaper Izvestiya.

Hungarian Prime Minister Viktor Orbán told his ruling Fidesz party that sanctions against Russia imposed by the European Union should be scrapped, the pro-government daily Magyar Nemzet reported late on Wednesday. Government spokesman Zoltan Kovacs confirmed the comments in an emailed reply to the news agency Reuters. Orbán, a harsh critic of EU sanctions on Moscow over its invasion of Ukraine, made the remarks at a closed-door meeting of his party members on Wednesday, before the start of the autumn political season.

Lithuania’s education ministry has said that it will “revise” all Russian-language textbooks amid Moscow’s invasion of Ukraine. A total of 13 school books will be assessed by the country’s National Education Agency (NEA). The move comes after criticism of one Russian-language textbook that glorified Moscow and portrayed Russia as an attractive democratic state. “В добрый путь” (“Good Riddance”) – which invited Lithuanian school students to visit Crimea – has now been withdrawn from circulation. “We must take these measures to make sure that what happened with the Russian textbook never happens again,” Lithuania’s education minister, Jurgita Šiugždinienė, said on Thursday.

Bosnian Serb separatist leader Milorad Dodik met with Russian President Vladimir Putin in Moscow on Tuesday days after he endorsed Moscow’s aggression against Ukraine. Dodik, a Serb member of Bosnia’s tripartite presidency, has frequently met with Putin, especially ahead of elections when he wants to show to the highly pro-Russian Bosnian Serb electorate that he has Putin’s support. Dodik last met Putin in June, months after Russia’s invasion of Ukraine in February. Bosnia has a general election on October 2 in which Dodik is running for the Bosnian Serb presidency.

NATO has brought some reserve troops of its peacekeeping mission (KFOR) for training to Kosovo, one of the mission commanders said on Wednesday, amid unrest among Kosovo Serbs ahead of a deadline for state-issued vehicle number plates. Earlier attempts to introduce Kosovo licence plates in heavily Serb dominated northern Kosovo had led to clashes between police and local Serbs, who erected roadblocks in summer. The barricades were only dismantled when NATO peacekeepers stepped in to oversee the process and Kosovo agreed to postpone the licensing rule deadline to October 31.

Romania is very keen to acquire the Iron Dome missile defence system from Israel, sources say following Romanian Defence Minister Vasile Dincu’s visit to Israel last week. If a deal goes through, NATO member Romania will become the first European country to buy the system. Since it entered Israel’s defensive arsenal in 2011, Iron Dome has proved its worth in many rounds of fighting against Gaza. Each battery costs around 150 million US dollars and each interceptor missile 50,000 US dollars. But Israel has failed to market the system, selling only two to the US Army for 373 million US dollars. The Americans aren’t thought to be interested in more.

Due diligence of PGE’s coal-fired power generation assets is underway as part of a carve-out process under a government plan, the Polish company’s chief executive Wojciech Dąbrowski said on Wednesday. “The coal asset spinoff is going according to plan. The due diligence process aimed at evaluating the assets is underway and I hope we will know the details of the agreements soon,” Dąbrowski told a news briefing. Poland plans to take over coal assets excluding hard coal mines owned by its utilities by the end of 2022, and then transfer them to a new state-owned company. The new model aims to help state-controlled utilities fund green projects as banks avoid backing coal-dependant companies.

A Czech billionaire’s gambling firm will take over the UK’s National Lottery, bringing an end to Camelot’s 30-year hold of the licence after months of legal wrangling. The UK’s Gambling Commission announced on Tuesday that Allwyn Entertainment, which runs lotteries in Austria, Czechia and Greece, will gain the latest National Lottery licence from February 2024. The firm, previously known as Sazka, has pledged to double charitable donations to 38 billion UK pounds over the next decade and to slash ticket prices to one pound. Its owner, oil tycoon Karel Komarek, has previously faced scrutiny over his links with Russian-state energy giant Gazprom, which is controlled by the Kremlin.