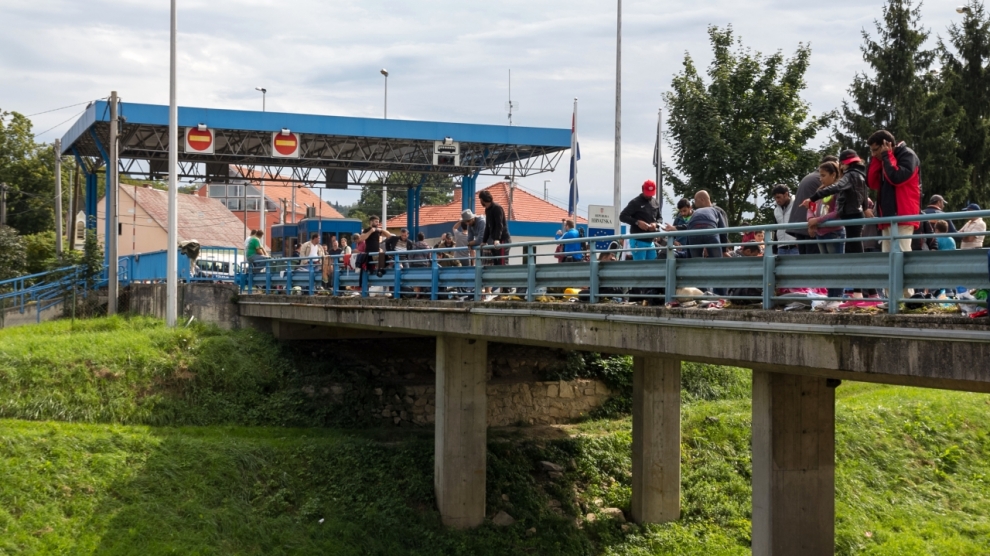 In late July 2017, the European Court of Justice (ECJ) ruled that Croatia had broken the Dublin III Regulation during mass-arrivals of refugees and forced migrants in 2015/2016. The rule was supposedly broken by allowing the refugees to cross over Croatian territory. This lead to the refugees ‘irregularly’ travelling further to Slovenia and Austria without imposing legal mechanisms of interception and eventual examinations of the possible claims for international protection (asylum).

However, the Court’s decision has a certain time constraint, limiting the responsibility of ‘the first EU entry-point state’ up to twelve months from the date of the unlawful irregular migrant’s border. Therefore, it is only possible to forcibly return those irregular migrants who might have later become protection seekers whose request for return was filed by the member state within that period crossing. There is the exception, however, of returning them to Greece from 2011 onwards.

We still cannot perceive what implications this decision will have in domain of national and regional politics, if any. The question is could this decision result in diplomatic and political tensions over the issue of higher numbers of forced returns of asylum seekers from the other EU member states to Croatia, like the practice which is now, by this Court’s decision, overtly legitimised.

Retrospectively, this puzzle was set in summer of 2015 by Angela Merkel’s call for more solidarity and humane solutions for the growing displacement movements of Syrian refugees. It is known that Germany welcomed politics of open doors, which meant temporarily suspending  the Dublin system. This enabled the situation of semi-legalised mass-arrivals and transfers of people from war-torn areas of Middle East over the Balkans to the core EU countries.

At that time, the Croatian government initially took a humanitarian stance by employing a strategy of state-controlled, organised, fast transit of people, adjusted and coordinated together with Serbian and Slovenian governments. More than 660,000 trespassed the country, while only some two hundred of them decided to lodge their claims for asylum in Croatia, before the gradual closure of the Balkan corridor in March 2016.

After the EU-Turkey agreement, further security measures, militarisation and criminalisation of the borders, plus asylum and mobility issues took place. Protecting the EU borders once again became more important than enabling refugees the access to territory and to status determination procedure.

In 2016, Austria sent more than two thousand claims for returns via Dublin to the Croatian Ministry of Interior. In 2016 and the first half of 2017, Croatia has accepted around eight hundred people, more than half of which are from Austria, Switzerland, Germany and other Western European countries. Most of the forced returnees were Afghani, Syrian and Iraqi nationals.

Being one of the EU ‘non-Schengen’ countries with very low protection recognition rates (around three hundred granted out of eight thousand applicants since 2004), less integration prospects and a lack of immigrants networks, Croatia still seems not to be attractive for refugees.. Many refugees are accommodated in two reception centres hosting a maximum of seven hundred people.

Supplementary integration activities are undertaken by few humanitarian and faith-based organisations. Even though those granted with protection could rely on state-paid apartments for two years and welfare benefits, the main problems remain to be the non-existence of systemic state-executed integration assistance. That being, most notably, the lack of language learning courses and employment opportunities. Moreover, recent public opinion polls indicate that former ‘Eastern bloc’ and Balkan countries are among the least-welcoming receptive countries for migrants.

Due to these circumstances, the majority of asylum seekers, as well as many asylum grantees, after a few months of staying in Croatia still opt for a chance to move further West. Croatia also accepted a quota of 1,640 people who would eventually be transferred over relocation and resettlement mechanisms. However, less than a hundred of them are relocated from Italy and Greece, proving that EU responsibility sharing and solidarity mechanisms are largely ineffective.

In this setting, the preconditions for forcible returns of rejected asylum seekers and their actual stay in Croatia are by far disputable. Besides, some civil society and refugee-rights organisations reported on violent interceptions, push-backs and expulsions of migrants at the Croatian-Serbian border, arguing that violations of human rights are regularly taking place after the closing of the Balkan corridor. Civil actors also warned about the sudden increase in negative decisions on asylum applications in Croatia. In the period from January to July 2017, there were many examples of refusals of applications for international protection, because applicants were classified as ‘security obstacles’ to Croatian state and/or society.

Decisions on a so-called ‘security obstacle’ are done by arbitrary assessments of the national Security and Intelligence Agency, which then serve as a legal ground to the Ministry of Interior’s rejections of applicants. It remains vague as to why all of those classified as security threats are some sixty persons who have been returned to Croatia since September 2016 via Dublin, and have since applied for international protection. Among them, there are children, disabled persons and single mothers.

Thus, humanitarian actors were advocating lawful and transparent treatment of asylum seekers, stressing this practice has led to a series of irregularities and arbitrariness resulting in violations of human and refugee rights. Most of the rejected applicants have submitted an administrative complaint to the Administrative Court, challenging these classified, secretive and arbitrary, undisclosed decisions.

Long periods of uncertainty and waiting followed by rejections could impact the applicants’ mental health and well-being, resulting in serious psycho-social problems related to existential stress and trauma. After living abroad in different administrative limbos and in various integration systems, they hope for the betterment of their legal statuses and life prospects.

Unfortunately, in the aforementioned decision, the Court missed the opportunity to dwell on the inadequacy of the Dublin system and the burden which it puts on states at the EU and Schengen external borders in regards to reception and protection prospects. Neither had it followed the argument of Advocate General Sharpston, which emphasised how the responsibility for applications and enabling the international protection should be taken and determined by those countries where the asylum seekers lodged their applications. In brief, the legal mechanisms of the EU have not been designed to cover such exceptional situations as the mass-arrivals of refugees and the probable humanitarian crises that could unfold.

However, the ‘Temporary Protection Directive’ that might had applied here was never called upon. Nowadays, refugees themselves, as well as countries on the edge of the EU asylum, border and migration system such as Croatia, have to pay a debt to these ineffective, non-solidary and unfair policies. They do so by balancing between personal agencies of how to move on or (not to) move back, versus national strategies on how to stay the least attractive to refugees. In addition, the demanding policies from ‘the EU core’ on how to prevent further ‘asylum shopping’ and/or ‘asylum orbiting’ cases is also causing problems.

Dr Drago Župarić-Iljić is a sociologist, working as a research associate at the Institute for Migration and Ethnic Studies in Zagreb.

Is there any prospect of ‘Polexit’?
Defending EU Values in Poland and Hungary
Comment