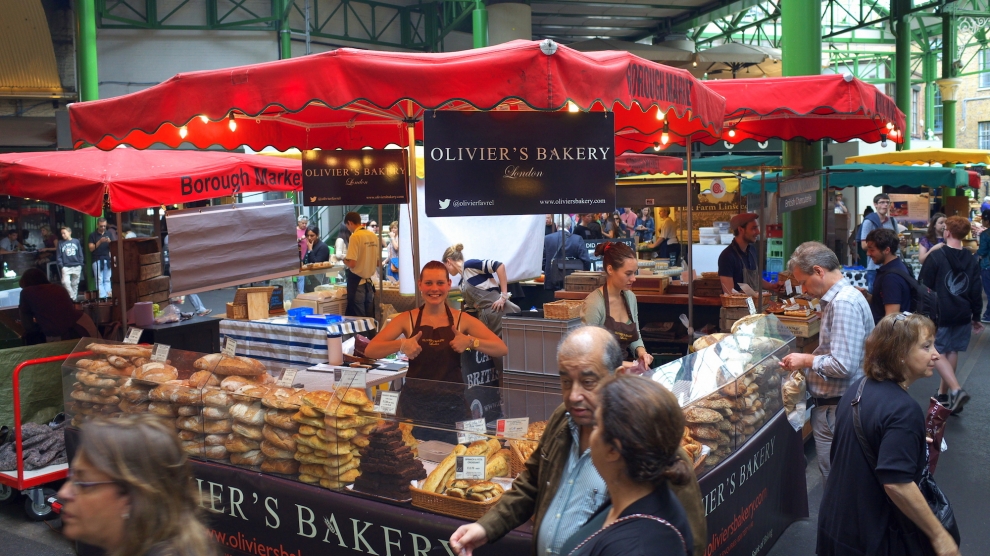 We met up with Adrian and his friends and we went on tour round Clerkenwell, Smithfield and a whole area inspired by the arts and media scene. Before we do that we took stock of what is now arguably the GREATEST food cities in the world – London! I want to share what we discussed so here we go….

London is now regarded as one of the leading food destinations and capitals of the world. Why is this the case? It has been an evolutionary story rather than a revolution. A number of factors have proved crucial in this story as well. Starting with big investment, followed by the right type of business people wanting to develop food; food events and markets like Borough Market, food retailing, food on television and in the wider media, a growing local economy, leading chefs wanting to work here, the international visitor, demand for food from all over the world, a growing interest in Britain’s own culinary heritage, freedom to cook away from some of the constraints that exist in strong food cultures overseas and finally, competition. There is nothing like competition to bring out the best in a city and its creative food and drink offer.

A recent comment by a leading food critic put into perspective just how important London is to the UK food economy. The London Evening Standard said that London now accounts for 80% of all new restaurant openings and 92% of all UK spend on dining out. On average the life expectancy of a restaurant business in London is now 12 months only. Competition is fierce and food owners need to be at the top of their game if they want to survive. In 2013 some 185 top end restaurants opened. After a year over 70 had closed. With that in mind, let’s take a closer look at some key developments over the past year and look forward to what kind of eateries you can expect to see into 2014.

What’s New? Opening through to June 2014

Some of the interesting places to watch out opening in 2014 include Simon Rogan at Claridges (March/April);Nanban, Alan Yau’s Duck and Rice pub; The Clink in Brixton (restaurant in a prison) just opened; Skye Gyngell London; Alan Balazs (Balash) Chiltern Firehouse using Nuno Mendes(meat on the menu NY style) in Marylebone; tapas food at Brindisa Food Rooms in Brixton; London House in Battersea run by Gordon Ramsay; Barrafina in Covent Garden (Spanish tapas) May 2014; Ember Yard on Berwick Street,a 90 seats eatery taking its inspiration from the rural Basque and Italian methods of smoking and grilling over charcoal.City Social in the City of London with Chef Jason Atherton (May) at Nat West Tower taking over from Gary Rhodes old restaurant; Polpetto and the all-day dining destination’featuring British cuisine, Holborn Dining Room now open. Fishers in Marylebone (Vienesse 20thC). Cornish Tiger in Battersea. Big Easy Bar B.Q and Crabshack (Covent Garden ) The original Big Easy has been a hit on the King’s Road They’re promising “the most authentic, American fresh-smoked Bar.B.Q, seafood, cocktail and drinks offer in the UK. Barnyard on Charlotte St run by Ollie Dabbous and ‘Home cooked food’. Marcus Wareing re-opens at The Berkeley 24th March. Massive makeover to tie in with 10th anniversary at the landmark hotel. LHR T2 – Gorgeous Kitchen run by a group of women chefs. Heston Blumenthal ‘The Perfectionist Café’ opens in T2 as well. Heston treatment on burgers, pizzas and more. Open from June 2014.

British chefs and others

Deformalised dining. This trend is having a big impact on much of London’s current dining scene. In recent months leading chef Bruno Loubet (Zetter Group) said that if restaurants, including his, don’t take note of the increasing casualisation of dining then their businesses will not survive. The customer is looking more and more for restaurants and eateries to suit their needs and if they don’t they will look elsewhere. Expectations are high and offering great service is also a key part of this trend and customer retention. The days of obscure ‘molecular gastronomy’ and one-time visit to a restaurant and never to return cannot be entertained by restaurants. The exception is the Fat Duck in Bray.

London has seen a massive influx of brilliant chefs in recent years. As mentioned earlier, many of them are attracted to work here because they can enjoy a lot more freedom to do what they want to do. Others because of the money that is being spent in London restaurants. Some of top chefs in recent years have come from the USA, China, France and Australia. We’re now seeing more from places like South America. I have to say at the same time that the influence of French cooking is still immense in London and around Britain. As we all know so much of what happens in our kitchens is heavily influenced by France. They are our  next door neighbours!

Several have emerged in recent years including Borough Market, Covent Garden, Marylebone, Shoreditch, Brixton, Spitalfields and Clerkenwell in the City of London. These have evolved because of restaurants and food business moving to the area to meet the needs of affluent residents. The other side has been due to redevelopment and regeneration. These include Kings Cross and St Pancras International.

We’re off to visit Clerkenwell so more from me later……London a GREAT City and the food capital of the UK!

Martin Oxley is Strategy Adviser of UK Trade and Investment in Central and Eastern Europe. He has spent the last 20 years working in Central Europe. Over the course of his career he has led the growth ambition of a number of blue chip and local pharmaceutical companies in the region. He has spent the last ten years promoting British Polish trade & investment, which has grown 5 times under his watch. Martin led the British Polish Chamber to become the leading international business networking organisation in Poland and has held a number of Non Executive Board positions in CEE based companies. Martin is a recognised international speaker and expert on Poland.
Twitter: @martin_oxley