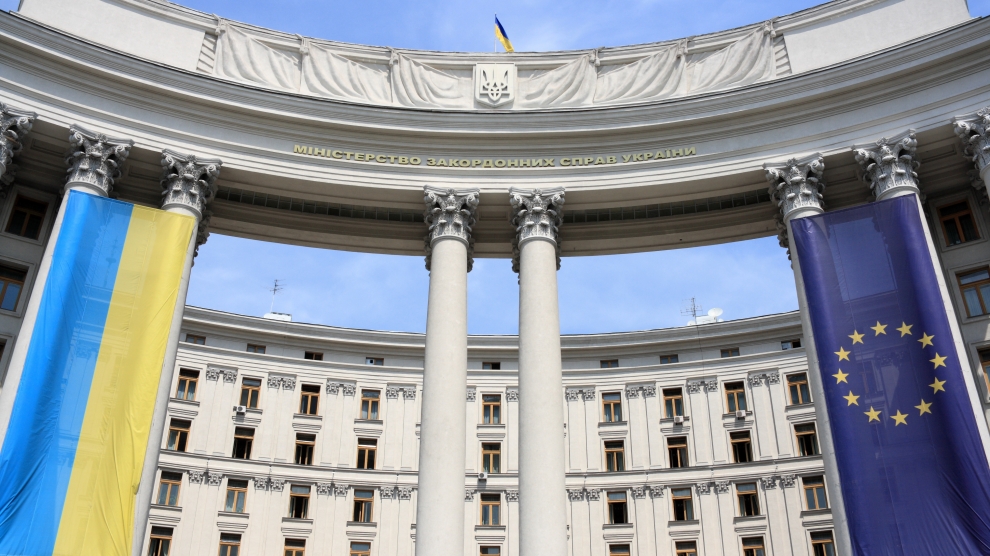 In February 2014 the Euromaidan revolution in Ukraine achieved its first goal of ousting the rapacious, corrupt regime of President Yanukovich; this was followed by open and fair elections for President and then Parliament. The new government then started to work on the Revolution’s second and third goals: to move quickly on integration with Europe including eventual EU membership, and to implement a programme of rapid economic reforms to repair the economic mismanagement of the past quarter century.

The democratic revolution of Euro-Maidan, with masses of the population on the streets from November 2013 to February 2014, was successful in its first aim of overturning the authoritarian and deeply corrupt regime of President Yanukovich. During the course of 2014  some interim governments, recognisedly democratic open elections brought a new president, Petro Poroshenko, and a new Parliament.

This new governing establishment faced an enormous five-fold challenge: undertake the market reforms that had not been accomplished since independence; address immediately and firmly the deeply-rooted corruption that resulted from delayed reforms; reduce sharply the complex system of regulations, licensing and taxation (which created a web of barriers and disincentives to business, earning Ukraine a very poor ranking in the World Bank’s Doing Business Reports) in 2013; reduce substantially the size of the bureaucracy associated with this complex regulatory regime and — finally — cut significantly the abnormally high magnitude of the Government budget (nearly 55 per cent of GDP compared to 35-40 per cent in neighbouring countries of Central Europe).

Some of theses challenges began to be addressed by the interim leadership with the introduction of a clean and transparent procurement law, some small cuts in licensing requirements, staff reductions, an IMF stand-by agreement and the start of legislation on judiciary reform and regional governance.

The Maidan activists were for the most part unhappy with such a slow pace of change, and most foreign donors constantly expressed the need for more reforms. Objective expert observers inside and outside Ukraine, while realistic about the possibility of repairing 25 years of policy mistakes in one year, generally felt more could have been done. We leave it to history to judge just how much faster reforms might have come in the circumstances of an yet-unelected new leadership and the additional blow of the Russian supported military aggression, first in Crimea and then in the eastern Ukrainian Donbas region.

The consequence of built-up structural problems, the perhaps-too-slow reforms, and the military aggression was a much sharper decline of GDP than projected in the IMF programme and the revision of that programme in the fall of 2014 — with much bigger financing and much more pessimistic growth projections of continued decline in 2015 and a slow recovery during 2016.

It is important to note that the cost of the military conflict goes far beyond the direct loss of territories and production activities in Crimea and Donbas – estimated at 15-20 per cent. The uncertainty caused by the continued conflict and the numerous unsuccessful ceasefires are also detrimental. Many military experts believe that the current lull in fighting is the calm before the storm of an expected invasion of Mariupol, which if lost by Ukraine would take away a major Black Sea port and create a wide land-corridor from Russia occupied Donbas regions to Crimea.  This would be a major military and economic blow to Ukraine.  The prospects of losing Mariupol are extremely discouraging to foreign investors and domestic producers.

Ukraine finds itself today in a very unique situation with its much-delayed transformation to a market economy needing to be sped up, its economy in a recessionary state, financial and debt crises threatening – and on top of all that an unexpected military conflict with elements of terrorism, irredentism, aggressive intervention by a neighbour who should normally be an important trading partner. Its most positive attribute is the spirit of a strong democratic  revolution demonstrating firmly that people want a democracy, market economy – i.e. “EU Values”  and future membership in the EU.

This is reflected politically in a newly elected government — the President, the Parliament, and the Government — which have demonstrated a strong will and capacity to correct the mistakes of the last 25 years. The process has started and has the support of the EU, other countries and international financial institutions.

But as Leszek Balcerowicz, the author of the Polish economic transformation program in the 1990s, recently said in an interview, the task may be even more difficult than Polish reformers faced because the opponents of reform — including oligarchs — have had 25 years to entrench their position in the system. The forces for reform must face down this opposition and their will to do so needs the financial and, perhaps even more importantly, the moral support that the EU can give by opening doors and paths to an accelerated integration of Ukraine into European life.

Professor Oleh Havrylyshyn is a former Deputy Minister of Finance and International Affairs in the first Ukrainian government, and after Maidan an economic advisor to the Presidential Administration of Ukraine. He was a Professor of Economics at Toronto University and the Joint Vienna Institute and Queen’s University and George Washington University, as well as a Visiting Professor at University Libre de Bruxelles (1981-1982) and Geneva Institute of International Studies (1986-1987).