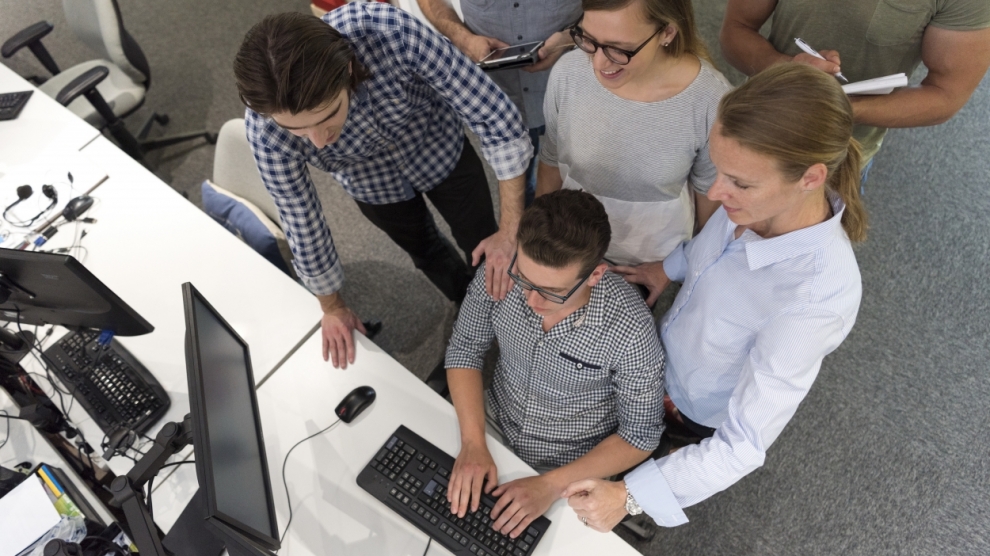 If the IT sector gets support at a general governmental level, it will contribute more and more to Ukrainian economics.

Low prices in the IT outsourcing sector stopped being Ukraine’s advantage a few years ago. Now, the country’s value is the services’ quality, which is incomparably higher compared to lower-cost Asian countries. Buyers look at Ukraine for technological expertise and reliability.

“Customers are unable to find a lot of people who have the same specific knowledge and skills in other regions. We are always proactive with our customers, offering them advice on how they can improve their products with new technologies, processes or R&D,” says Ruslan Zakharchenko, CEO at Eleks.

Yevheniy Rodin, CEO at NewGround, adds the easier communication and better transparency that are to be found in Ukraine compared to other regions. Vladimir Kuzmenko, Head of PMO at NIX Solutions, says the advantage Ukrainians have is being smart, and thinking wide. “Going into the deepest details of technologies on one side, and thinking about the business needs and their optimal implementations together with the client on another,” he adds.

Oleg Nesterov, the Founder and CEO at MindK, says that many Ukrainian companies have already started switching from the so-called ‘body shopping’ to providing solutions or developing their own products as well as providing developmental services on top of those products. “With such an approach, low cost is not the main advantage of working with Ukraine,” he adds.

“Over the past five years the Ukrainian IT market has enhanced its position on the world map. There was extreme growth in the number of IT service providers. Nowadays, there are more than several thousand Ukrainian companies providing not only outsourcing development services but also their own products, which correspond to modern trends and needs,” says Oleksandr Nikitenko, CEO at Sirin Software.

No massive pay rise ahead

Eleks’ Mr Zakharchenko says that some 15-20 years ago software development jobs in Ukraine were mainly done by people with scientific (mathematics or theoretical physics) backgrounds. “The industry itself was very much a niche industry. Gradually though, as the share of IT in the country’s export has continued to grow, the demand for professionals has also grown dramatically,” he adds.

According to Serg Kondratuk, CEO at Quartsoft, today, an average specialist in Ukraine makes about $20-40 per hour. “Keeping rates at this level makes cost competition reasonable up to the level of $50-75 per hour, when it gets closer to rates in the EU and the US for the same technology stack. There is still room for growth for smaller companies and those in the region,” Mr Kondratuk adds.

Eleks’ Mr Zakharchenko, NIX’s Mr Kuzmenko and NewGround’s Mr Rodin don’t predict a booming salary growth in the near future. MindK’s Mr Nesterov says that salaries in the IT sector keep growing at a moderate pace and this growth will continue for the next few years.

“Salaries now are close to the top, considering the current rates for our services. Meanwhile, Ukraine is likely to introduce European taxation practices and as a result the net income may even decrease slightly. More taxes usually mean the country is able to provide its citizens with more services of a higher quality, so, despite this probable decrease, the standard of living should improve,” says Mr Zakharchenko.

“The current labour market has problems retaining senior staff because of the unstable political situation in Ukraine. Such situation caused brain-drain e.g. to Western Europe. Junior staff demand increases and this has been stimulated by a variety of educational courses, IT-hubs and of course by the number of graduates annually,” says Sirin Software’s Mr Nikitenko.

Newground’s Mr Rodin says that because of significant growth of the IT market and the attractive image of IT jobs, lots of people are shifting from other industries and specialties to the IT sector.

“That might create a percentage of low-skilled candidates, but it still doesn’t mean the quality of services in Ukrainian companies would become lower. Every year more and more students choose to study technology. So, the tendency of the IT market to grow will continue,” he says.

Does the government support the development of the sector? Mr Zakharchenko says that the government explicitly declared its support for the IT industry. “One of the most significant demonstrations of this support was the adoption of the law that simplified the export of services. Additionally, the number of state scholarships for IT professions has been significantly increased in 2016,” he adds.

“If the IT sector gets support at a general governmental level, it will contribute more and more to Ukrainian economics. However, any additional restriction or tax growth will cause a decrease in the number of specialists and capital outflows, which might pose great risks to the economic growth of the Ukrainian IT sector,” says Sirin Software’s Mr Nikitenko.

Consequently, there will be fewer exports of IT services. In 2016, the IT industry accounted for 17 per cent of the export of services in Ukraine and there are prospects for more, as Ukraine’s IT outsourcing is bound to develop further in the future.

Changes might affect companies, as there is a strong trend towards globalisation. “We are seeing big companies acquiring small ones and all the staff becoming available on the labour market. At the moment, companies with about 100 employees have the ability to shortlist the project for relevant candidates with corresponding experience and reasonable rates, whereas big companies consume the all resources available,” says Quartsoft’s Mr Kondratuk.

MindK’s Mr Nesterov predicts moderate growth in outsourcing and more rapid growth in product development services and solutions. NewGround’s Mr Rodin says new industries and technologies will come with new trends. “We will see plenty of new opportunities for building solutions, that have never existed before. It is also possible that more coding will be done by robots. However, the demand for high-quality specialists with knowledge in core technologies will remain, for sure” he adds.

“We see that every industry is trying to apply IT to boost their productivity and to make their business approaches more effective. For example, nowadays IT is changing business models in logistics and transportation; it is being widely adopted in the legal sphere and is changing the consumer experience in retail tremendously. The majority of industries are going through a transformation caused by the development of technologies and thus drive this progress further and further,” says Mr Zakharchenko.

“New areas of technologies are being developed today, such as augmented reality and virtual reality, the Internet of Thing and artificial intelligence. With them, the demand for qualified IT resources will grow, as new tech areas will require new people: smart enough to learn quickly, educated enough to think both deep and wide and experienced enough with current tech stack. We Ukrainians are such people,” says NIX’s Mr Kuzmenko.