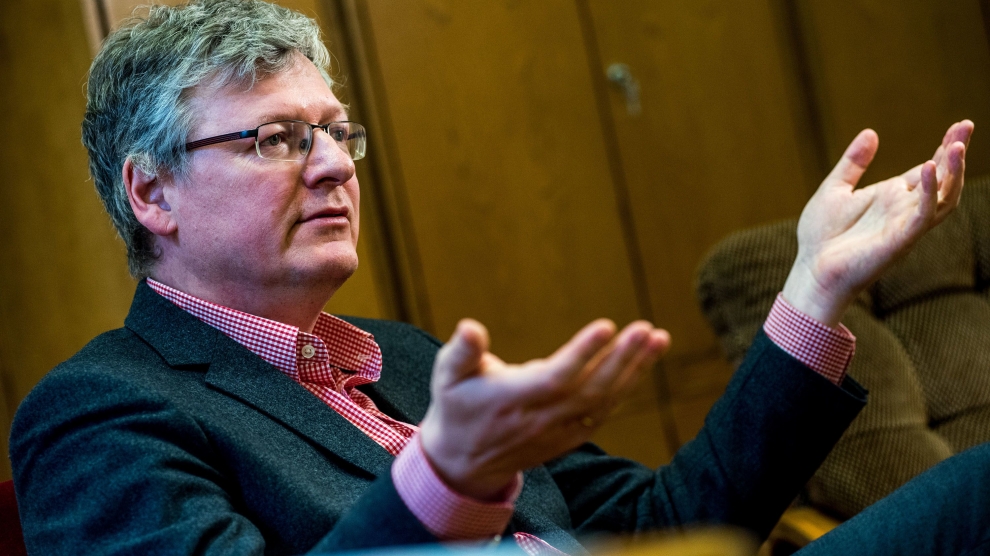 A month after winning the general election in 2018, Hungary’s prime minister Viktor Orbán announced his intention to make Hungary one of the EU’s five most livable and most competitive countries by 2030. Professor László Andor, a former European Commissioner, argues that despite campaigning on such “lofty slogans”, we must look at not what is being said, but done.

The Hungarian PM is aware that the country’s economy was given a strong pre-election boost that, amongst much else, allowed for a significant increase in the minimum wage – by maintaining a very lax monetary policy and making maximum use of EU funds – to give the impression that the economy is booming. While Mr Andor agrees that this was amongst the most important drivers of support for the ruling Fidesz party, Mr Orbán’s consecutive electoral success is also due to other facts.

“He changed the rules of the game and ensured that he cannot be unseated with the same tools which he used to unseat the previous government,” he tells us, pointing to how the Fidesz party changed the Hungarian media landscape, the electoral system and the electorate itself.

However, the pre-election boost was followed by consolidation measures including dismissals in the public sector, cutbacks in housing saving schemes, in-work benefits for employees, as well as the introduction of the so-called slave law that resulted in weeks of nationwide protests. “This sequence of adjustment measures suggests that the government was aware of the weaknesses of the fiscal and economic position of Hungary and shortly after the elections they wanted to do something about it to maintain confidence,” says Professor Andor.

Characterising Hungary’s economic policy from its weaknesses, the former EU commissioner puts the waste of human capital at the top. Since 2010, more than half a million citizens have left Hungary for Western Europe as they find their home country unable to provide them with decent living standards. “These are people with the capacity and the ambition to work elsewhere in the European single market. Their departure has resulted in very serious bottlenecks in economic growth over the last two years,” he adds.

Discussing strengths, he argues that the consolidation of Hungary’s monetary policy has been “very strategic” to support the recovery process. While he says that the fundamentals of the economy have improved, institutional uncertainty regarding key factors such as legislation or taxation remains one of the main problems as it is the reason why economic policy since 2010 did not immediately translate into great success. “Fiscal consolidation and other factors would have allowed for much faster improvement, but exactly because of the lack of transparency and often unpredictable behaviour of the government regarding the institutional side, it did not happen,” he tells us, noting that constraints on fiscal policy and competitiveness are here to stay.

Commenting on the continuous economic growth of the last five years, Professor Andor points out that external conditions have been highly favourable, with EU transfers and massive private capital inflows pouring into the region. The German economy has also been doing very well. Therefore, it is fair to argue that a large part of the economic improvement is due to external factors. Nonetheless, as the European Commission is preparing to cut EU funds for Central and Eastern European EU member states, Professor Andor warns that Hungary has to prepare for a new economic reality.

“Hungarian economic policy will need to identify more endogenous sources of economic growth. The various forms of scrambling in government circles, regarding innovation policy for example, are signs that they themselves have also probably understood at least a part of this problem, but I can’t see whether or not they have found any kind of solution or strategy to address this change in the external conditions,” he argues.

The Hungarian government currently has no intention of introducing the EU’s common currency. Professor Andor believes that this refusal stems not from economic reasons, but political. Joining the eurozone brings with it a number of obligations. He cites Slovakia’s example of introducing the euro in 2006, and says that Hungary could use the common currency as part of a similar confidence-building strategy, but “the time has not yet come for that”. He also stresses the importance of learning lessons from the failed attempts of the previous socialist-liberal governments to introduce the euro.

Expressing his views on the so-called rule of law conditionality that would allow the European bloc to suspend financial transfers of the EU’s 2021-2027 Multi-annual Financial Framework to illiberal states such as Poland and Hungary, he believes it may not be fortunate to put these two countries in the same basket. “In Hungary, what we are witnessing is a systemic abuse of EU funds on an industrial scale which is not exactly the case in Poland,” he says, highlighting that Hungary actually shares more similarities with Romania rather than Poland in terms of this abuse.

Another concern he shares on this proposal is political judgment, since it took the European Council, the body of EU heads of state or government, years to start dealing with the issue. “The consequence of cutting funds could be counterproductive politically and very unjust economically because it can hit people who otherwise desperately need the investment from EU resources and might not be guilty of violating of the rule of law: it’s the government which has done things that are considered major wrongdoings,” he adds, suggesting that the EU should examine what else could be done.

Although he believes that rule of law conditionality “would do no harm”, he considers the soon-to-be established European Public Prosecutor’s Office, that will investigate the misuse of MFF funds, more useful in practical terms. “As long as it is mandatory for all countries using EU money,” he adds as a caveat. Nonetheless, he advocates another possible solution: “The European Commission should have the right to establish a task force or introduce direct management or assisted management to ensure that it’s not the corrupt distribution channels of the particular member state which decides on the allocation of EU funds, but EU bodies in a close and professional context with the final beneficiaries who rely on the EU resources for their local investments,” Professor Andor concludes.