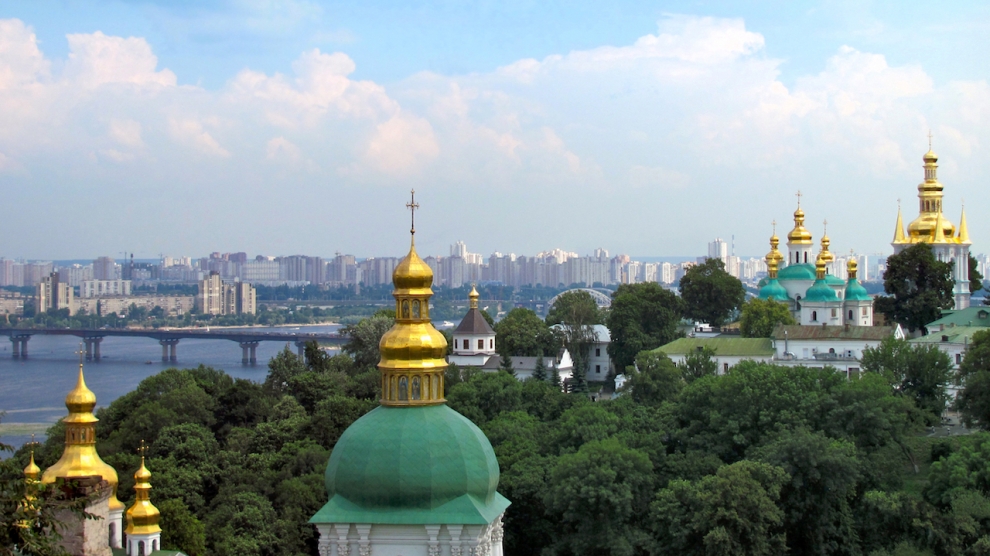 Since it obtained full sovereignty from the Soviet Union, in 1991, Ukraine has remained suspended somewhere between the East and the West, being pulled closer to one or the other by various administrations. Now, paradoxically, an important stimulus for defining the future identity of this country of over 40 million has come, with the Russian occupation of the eastern part of Ukraine in 2014.

Ivanna Klympush-Tsintsadze, Ukrainian Deputy Prime Minister for European and Euro-Atlantic Integration, spoke to Nikodem Chinowski about the prospects for integration with NATO and the European Union and about the development of the Ukrainian economy, a few days ahead of the 25th anniversary of the country’s independence.

Let me start with a very general question — what are the main goals for Ukraine’s current government, in terms of international relations?

Well, I would say that EU and NATO membership is the top objective for the current government but Ukraine’s foreign policy is guided by a number of key priorities.

The strategic goals of Ukraine’s foreign policy include: European and Euro-Atlantic integration; strategic partnerships with the United States of America and the European Union; cooperation with the Commonwealth of Independent States and the member-states of GUAM (the Organisation for Democracy and Economic Development for Georgia, Ukraine, Azerbaijan and Moldova); active engagement with the UN and other international organisations; an effective participation in the global economy with the maximum protection of national interests and the transformation of Ukraine into a regional power.

There is no competition between the European and Euro-Atlantic dimensions of Ukraine’s strategic course towards Europe, that is, as we move towards the choice of a Westernised civilisation as averse to historical Russian values.

The highest priority remains the ratification and full entry into force of the EU-Ukraine Association Agreement. At the same time, the NATO-Ukraine Distinctive Partnership is an inalienable part of Ukraine’s strategic course towards EU membership and it is an essential element for security in the Euro-Atlantic area and beyond.

The strategic nature of NATO-Ukraine Distinctive Partnership has framed relations and the practical cooperation between Ukraine and NATO, and will continue to do so. Right from the very beginning of the Russian aggression, NATO expressed its firm support for Ukraine’s sovereignty and territorial integrity, at the same time condemning Russia’s illegal and illegitimate “annexation” of Crimea and the ensuing violence and insecurity that Russian and Russian-backed separatists caused in eastern Ukraine.

Remember that Ukraine, NATO and the EU work together actively in order to bring their people closer to each other, to protect human rights and freedoms and to preserve peace and stability in the common Euro-Atlantic home.

But coming back to your question, I must say that both — economic and military cooperation — are equally important for Ukraine’s people. It’s our fight against Russia’s intervention and domestic democratic reforms.

Let’s now imagine Ukraine as a member state of the European Union — how far into the future must one go to see this image become reality? When can Ukraine expect to be recognised as a candidate for future membership of the European Union? President Petro Poroshenko set the year 2020 as the target for the EU membership application. Do you see this possible or does it seem too optimistic?

Well, on the 27th of February, 2014 the European Parliament passed a resolution that recognised Ukraine’s right to “apply to become a Member of the Union, provided that it adheres to the principles of democracy, respects fundamental freedoms and human and minority rights, and ensures the rule of law”.

The European Commission president, Jean Claude Juncker said recently that Ukraine would not be part of the European Union for the “next 20 or 25 years”, ahead of a Dutch vote on whether or not Ukraine should be granted an EU association agreement.

The EU leadership has praised the Ukrainian authorities’ efforts to implement constitutional reform, anti-corruption legislation and deregulation reform. Ukraine will carry out the required reforms in order to apply for EU membership. Ukrainian Prime Minister Volodymyr Groysman predicts that our country will join the EU within the next ten years.

How would you define the biggest obstacles on the way to join the EU? Is a free-trade agreement still any key issue that may block further negotiations?

I would say that some things that could continue to complicate Ukraine’s membership to multinational unions, however, are the presence of pro-Russian rebels in the country’s east and Russia’s control over the peninsula of Crimea.

Russia is doing its utmost to stop the expansion of the EU’s influence into the east and, hence the promotion of democracy and the principles of a rule-of-law state. Ukraine is still a long way from becoming an EU member but it is already making very significant steps in the right direction, including a long list of internal reforms. Only a major disaster can prevent Ukraine from joining the EU in the coming years.

Now the same as far as NATO is concerned — what is a time-line for Ukraine joining NATO?

Relations between NATO and Ukraine date back to the early 1990s and since then they have developed into one of the most substantial of NATO’s partnerships.  A sovereign, independent and stable Ukraine which is firmly committed to democracy and the rule of law is key to Euro-Atlantic security.

Since 2014, and in the wake of the Russia-Ukraine conflict, cooperation had been intensified in critical areas. Priority is being given to supports for comprehensive reform in the security and defence area, which is vital for Ukraine’s democratic development and for strengthening its ability to defend itself. In response to the Russia-Ukraine conflict, NATO has reinforced its support for capability development and capacity building in Ukraine.

NATO membership is a strategic goal for Ukraine. Ukraine welcomes NATO’s open-door policy and NATO’s 2008 Bucharest summit’s decision was that Ukraine will become a member of the Alliance. We expect that NATO’s door will remain open to “European democracies willing and able to assume the responsibilities and obligations of membership” as it is described in official NATO documents.  We also expect that decisions about enlargement are for NATO itself to make.

Preparation for a future NATO membership is an important direction for Ukraine’s foreign and domestic policies. The long-term goal of Ukraine is to achieve complete compatibility with NATO and the armed forces of its member states.

Is there any particular date set by Ukraine’s government?

There is no timeline established for Ukraine’s plans to join the Alliance. Our first priority is a deep and profound reformation of the country, the institution of European democratic values and the security of the nation.

Why do the EU and NATO need Ukraine in their structures? What are the main profits that Ukraine can offer those organisations?

NATO and the EU are interested in a democratic, free and independent Ukraine, which is a key factor for Euro-Atlantic security. This is also in the core interests of the Ukrainian people.

It is about not only about what NATO or the EU can do for Ukraine, but also what Ukraine can and already does for Europe. It is important to note that Ukraine has the unique experience of having fought the largest army in Europe. No single European state has yet fought a modernised Russian army. Ukraine has had a successful experience of countering Russian hybrid warfare tactics for the past two years.

We do not expect NATO forces to fight for us. Ukrainian troops are able to defend Ukrainian sovereignty and we have contingency plans for different scenarios in the conflict. However, Ukraine and NATO could be a strong defender of the eastern flank of Europe, together.

We already have a history of successful cooperation in NATO-like joint military exercises. Let me give you the example of the Lithuanian-Polish-Ukrainian brigade that participated in the largest war-games in Poland Anaconda in 2016. We must intensify and develop this combat experience, over both urban and rural terrain, further. The Donbass front (otherwise known as the “ATO”) combines military and police operations; this is different to what NATO armies are trained for. Ukraine can contribute to NATO’s collective security with the combined experience of the Ukrainian troops, security service and military intelligence.

Ukraine is already contributing to NATO and the EU defence. Despite the Russian aggression, we are participating in NATO-led operations such as “Resolute Support” in Afghanistan and KFOR in Kosovo. Ukraine also contributes to the NATO Response Force and to the EU Battlegroups, the Visegrad Battlegroup and the Balkan Battlegroup.

So Ukraine’s membership in NATO and the EU is aligned with the core interests of Europeans.

So let’s now move to the Ukrainian economy for a moment. At what stage of economic cycle is your economy, in the second half of 2016? Can we expect any rise or decline in terms of GDP?

Despite the large scale economic crisis, all our efforts in macro financial stabilisation and the development of a good business environment are already producing moderate forecasts for economic growth. We are hoping for at least 1 per cent GDP growth by the end of the year. The forecasts for the next year are brighter.

I believe that our economy will benefit, already as early as this autumn, from our efforts at reform in the financial sector and our improvements in the business environment. All these efforts to ensuring better conditions will be reflected in next year’s WB Doing Business rating, as a number of legal measures have also been adopted in 2016.

What is the Ukrainian government’s policy relative to your currency, the hryvnia? What will you do to keep it stable compared to the euro and dollar?

The National Bank of Ukraine is the body responsible for this issue and it has undertaken some extremely ambitious reforms of monetary policy. The bank is moving its policy from controlling the exchange rate to inflation targeting. After the devaluation in 2014-2015 the hryvnia exchange rate has stabilised. I believe that external geopolitical and geo-economics issues today may present the biggest challenges to stability of the currency.

The stabilisation of the local currency is a key factor in attracting foreign direct investment. How else would you attract FDI to Ukraine?

The implementation of the Deep and Comprehensive Free Trade Agreement (DCFTA), which is part of the Association Agreement between the EU and Ukraine, is one of the most important ways to attract foreign direct investment into Ukraine. We are seeing that even just the fact an Association Agreement existing between Ukraine and the EU is drawing interested foreign investors here.

Another very important issue which I should stress is that our government is working on the creation of Foreign Investment Support Office to help investments from the very beginning up to their successful placement. It is important that we provide macro financial stability and we are in the process of implementing anticorruption and judiciary reform.

Which sectors might foreign companies find attractive in Ukraine?

I think that almost everybody knows that the most attractive sector of the Ukrainian economy is agriculture. However, we believe that more important features of Ukraine are its creativity and the intellectual capacity of our people. Here, we are talking not only about IT industry but also about science and technologies.