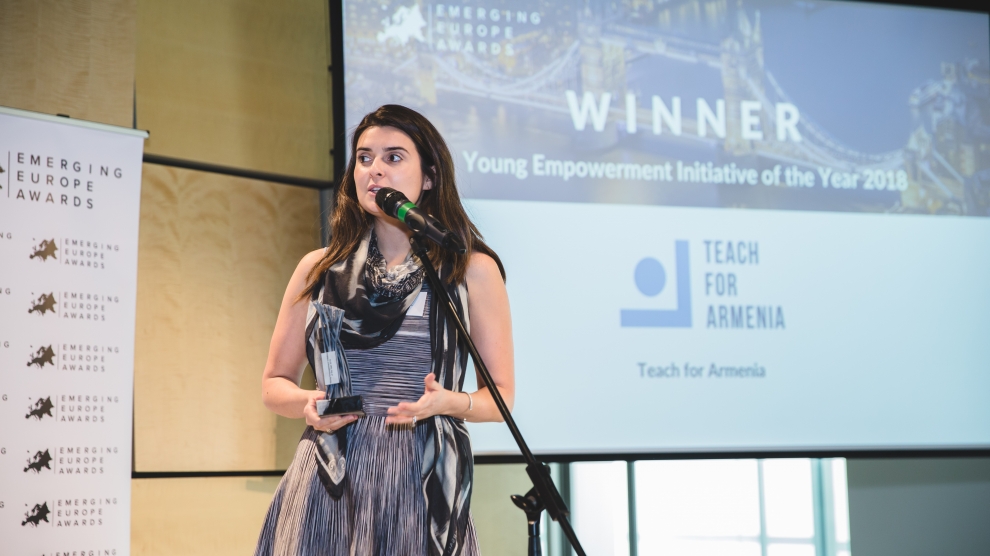 With education of the utmost importance, and teachers responsible for developing the minds and the emotional maturity of future generations, it is no surprise that Teach for Armenia (TFA), whose slogan is ‘Shaping Armenia’s future one classroom at a time’ won Emerging Europe’s 2018 award for Young Empowerment Initiative.

For more than five years TFA has been leading a two-year fellowship to place highly-qualified graduates into schools to educate children in those communities in Armenia which find it difficult to attract good teachers. But TFA works to do more than simply provide an education to those in need, as Larissa Hovannisian, founder and CEO of Teach for Armenia tells Emerging Europe.

“We do not regard our work as teacher placement, simply filling shortages,” she says. “While we do prioritise areas and communities which lack teachers, the ultimate goal behind what we are doing is to try and shift the system. We need to be able to source not just highly qualified people, who have graduated from top universities, but source people who can solve the educational crisis we are facing.”

“We need young leaders who are deeply in touch with the realities of this country, with the problems that our kids are facing and who have seen the public education crisis from within. We invest in these people because we believe they are the ones who need to be writing policy, who need to become the next principals, drafting curricula. They are the future leaders in the education system, ready to go into any other sector that could affect a child’s education and development, and life outcomes,” Ms Hovannisian, pictured above, adds.

“A lot of people are leaving Armenia’s remote towns and villages to live in larger cities like Yerevan, and once they have completed their studies in the capital, they decide to stay, and opt for jobs working in restaurants and the like as it provides them a better quality of life than returning home,” says Tatevik Ghazaryan, marketing and communications coordinator at TFA.

Worse, many people graduate as teachers but refuse to return to their village, instead seeking employment in schools in larger cities.

“In one area, where we placed one of our people, there had not been a biology teacher in the school for 10 years, which means there was a whole generation of students that did not learn biology,” Ms Ghazaryan says, adding that “teacher training is always a last choice for university students who want a degree but could not get onto other courses. This is also reflected in the quality of the teachers.”

TFA is trying to involve the Armenian diaspora in the programme. So far, about 15 per cent of its 550 applicants (for the period 2018-2020) are from Armenians living abroad. One issue that Larissa Hovannisian and Tatevik Ghazaryan face is the language barrier: many people of Armenian descent do not actively learn the language and therefore do not know how to read and write it. Another challenge is that among many Armenians born aboard there is a romanticised view of the country: all beautiful landscapes, wonderful food, people and culture, and they do not want to ruin this idealised notion of their homeland by facing the reality of what is actually happening in the country.

“Also, there is sometimes a lack of positive role models in schools, particularly for young boys. “The majority of people who apply for teacher training are women, and quite often they do so in
order to simply get a degree,” Ms Hovannisian says with concern. In many of the villages where TFA places teachers, male students regularly miss school because they are out working to help their families. As such TFA has adjusted their strategy in order to recruit more male teachers to provide a positive male role model for these children.

“In the past only 10-15 per cent of our teachers were male; this year (2018) that has changed, and about 45 per cent of our fellows are now male, which further reinforces the work that we are doing,” adds Ms Hovannisian.

That work is not just about teaching, its is about changing and advancing the society they live in.

“What is important to know about TFA’s model is that it is an educational organisation and our ultimate goal is to reform the education sector in Armenia so that it finally reaches a high quality and an excellent education is accessible regardless of where a child lives or where they are from,” says Ms Hovannisian.

“However, there is another aspect to this organisation. We are in a place in our history where we can’t ask emigres to return when there are no opportunities for them, while members of minorities may not feel safe working or living here for a long period of time. What we are looking to create, to build, are long-term solutions and changes in mindsets of the people in Armenia. I really want to do the unthinkable, because Armenia needs to be supported right now. This is something that is part of TFA’s DNA.”