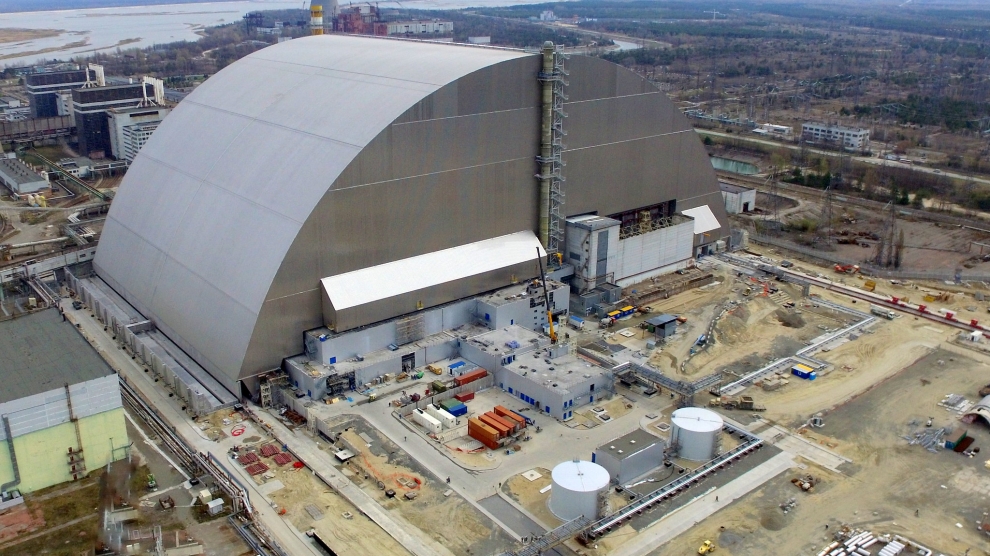 Ukraine’s president Volodymyr Zelensky has symbolically been handed the keys to the new safe confinement shelter which covers the destroyed reactor four at the former Chernobyl nuclear power plant.

The ceremony marks an important step in the transformation of Chernobyl into an environmentally safe and secure state.

The handover also represented the completion of the largest ever example of international cooperation in the field of nuclear safety. Besides Mr Zelensky, the event was attended by the chairman of the Chernobyl Shelter Fund, Hans Blix, the European Bank for Reconstruction and Development’s (EBRD) managing director for Ukraine, Eastern Europe and the Caucasus, Matteo Patrone, the EBRD director for Nuclear Safety, Balthasar Lindauer, and representatives from many of the countries and institutions which have donated to the safe confinement of reactor four.

The structure cost 1.5 billion euros and took nine years to complete. Officials have described it as the largest moveable land-based structure ever built. It encloses the destroyed reactor four, the unit destroyed by the 1986 nuclear accident at Chernobyl, and the provisional shelter built after the accident which still contains the molten core of the reactor and an estimated 200 tonnes of highly radioactive material.

It was financed by 45 donor countries and institutions, with the EBRD donating 480 million euros.

“Unfortunately, the [Chernobyl] exclusion zone is still a symbol of corruption — law enforcement officials collect bribes from tourists, smuggle out illegal scrap metal and use natural resources. We will stop all of this soon,” said Mr Zelensky, who added that he hoped to make the area a magnet for scientific research and for tourists.

Chernobyl has seen a spike in tourist arrivals thanks to the success of the HBO miniseries Chernobyl, which depicts the aftermath of the 1986 explosion.