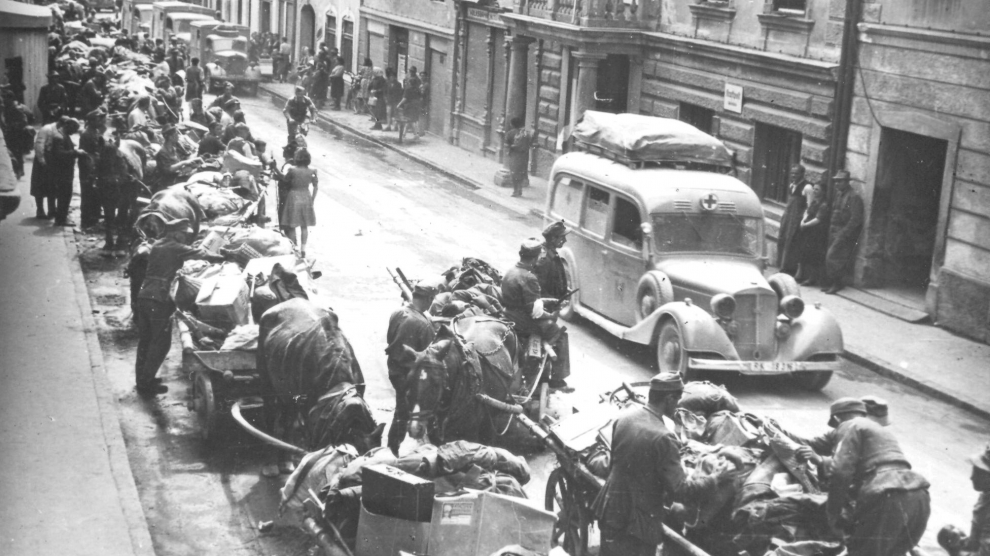 Thousands of marchers assembled in the Bosnian capital Sarajevo on May 16, defying coronavirus-related bans on public gatherings, to protest against a mass dedicated to the victims of the Bleiburg repatriations held in the city on the same day.

The Bleiburg repatriations occurred in May 1945, at the end of World War II in Europe. Tens of thousands of soldiers and civilians associated with the Axis powers fled Yugoslavia to Austria as the Soviet Union and Yugoslav Partisans took control. The British army, however, turned them back and forced them to surrender to Partisan forces. Tens of thousands were executed; others were taken to forced labour camps, where more died from the harsh conditions.

The events are named for the Carinthian border town of Bleiburg, where the initial repatriation was conducted, and where a memorial service is usually held.

This year, however, the service was moved to Sarajevo as a result of coronavirus travel restrictions. The event was organised by the Bosnian and Croatian Catholic churches under the auspices of the Croatian parliament, which reintroduced its sponsorship of the commemoration in 2016 after having revoked it four years previously over fears that it rehabilitated Croatia’s fascist Ustaša movement.

However, Sarajevo was a strange, and controversial choice. The city was the site of violence and death for many Serbs, Jews, and Romanies during World War II when the Axis-allied Ustaša-led Independent State of Croatia ruled Croatia and parts of Bosnia and Herzegovina. The regime also killed around 100,000 people at the Jasenovac extermination camp in Croatia itself.

The memorial mass was conducted by the Catholic Bishop of Sarajevo Vinko Puljić at the city’s Sacred Heart Cathedral, which was cordoned off and placed under heavy police guard.

The Simon Wiesenthal Centre, a human rights organisation dedicated to Holocaust research, called the services “a travesty of remembrance and justice.”

In a statement on March 14, the Centre had asked the Bosnian government to outlaw the commemoration.

Members of the Jewish community of Bosnia and Herzegovina were similarly harsh in their criticism of the event, saying in an open note of protest sent to Bishop Puljić that: “They are commemorating the killers of mothers, fathers, and grandfathers.”

The event was further condemned by all three members of the Bosnian tripartite presidency as well as political parties, NGOs, the Serbian Orthodox church, and the US and Israeli embassies in Bosnia.

“The state of Israel stands firm and raises its voice against all attempts of revisionism and any such and similar regrettable narratives. The Jewish community under the Independent State of Croatia (NDH) suffered in terms which are impossible to describe. Jews were sent to their death en masse to Jasenovac and other death camps during this terrible period alongside so many other peoples,” the Israeli Embassy said in a statement.

Bishop Puljić rejected the accusations by stating that “prayers for the souls of the victims do not mean the justification of their actions.”

Meanwhile, protesters sang the Italian revolutionary song Bella Ciao and shouted “Ustaša are fascists” and “fascists are not victims.” Chants of “Death to Fascism! Freedom to the People!” were also heard.

Despite the large number of people, and heavy police presence, the protest proceeded without any incident, while a similar but smaller protest was held in the Bosnian city of Tuzla.

The Bleiburg repatriations have long been a subject of fierce controversy in the former Yugoslavia.

Knowledge of the events surrounding the repatriations was suppressed in Yugoslavia during the communist period. It is only since the fall of communism in the 1990s that public debate began and some of the mass graves were uncovered.

The exact number of victims during the Bleiburg repatriations is not known and is the subject of much speculation. Estimates range from 50,000 to 250,000.