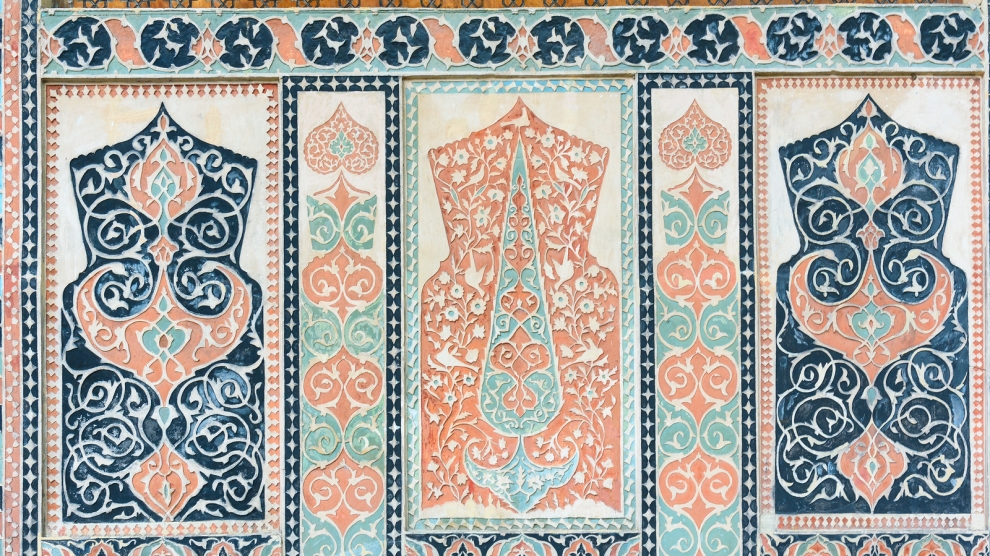 The ancient Azerbaijani city of Sheki become one of a handful of cultural sites from around the world to be added to UNESCO’s prestigious World Heritage list in Baku earlier this week.

Sheki is nestled in the lush green forests of the cooler mountainous region to the north of Azerbaijan. It is surrounded by the snowy peaks of the Greater Caucasus, a 1,200-kilometre mountain range that stretches from the Black Sea to the Caspian over Russia, Georgia and Azerbaijan, splitting Eastern Europe from Western Asia.

With a history that dates back 2,700 years, Sheki was a major staging post of the Silk Road that carried exotic goods, people, knowledge and culture between China and the West. For centuries its main industry was silk production. Later, it was to play a key role in the trading empires of imperial Russia. As a result, Sheki epitomises a culture influenced both by the East and the West, combining the European with the Asian.

The centrepiece of Sheki’s bid to join the UNESCO list is the jaw-dropping Palace of Sheki Khans. Built as a summer palace of the Sheki Khanate that ruled over the region between 1743 and 1819, it is a breath-taking example of the region’s eighteenth-century architectural flourishes. Sheki craftsmen utilised wood from Russia, French stained glass, ceramics from the Ottoman empire and mirrors from Iran. Its kaleidoscopic windows deploy the ancient art of shebeke wooden latticing to stunning effect.

Sheki and its palaces are just the latest of Azerbaijan’s treasures that have been recognised by UNESCO. Already on the list is the Walled City of Baku, which incorporates Shirvanshah’s Palace and Maiden Tower, and the Gobustan Rock Art Cultural Landscape that dates back nearly 20,000 years by some estimates.

For these sites, the international coverage they receive is a boon for tourism. Sheki is already home to the Mugham Festival and Silk Road International Music Festival, but in the longer term, the revenues gained from more visitors enjoying UNESCO splendours creates a positive feedback loop that ensures artefacts and customs survive and thrive for generations to come.

Azerbaijan received 2.8 million international tourists in 2018 – a record number. The 2017 introduction of easy three-day visas have helped to increase the footfall of international tourists in cities like Baku, Gabala and Sheki. Major events like the Baku F1 Grand Prix and 2012 Eurovision Song Contest have also helped to put my country on the map.

The international cooperation promoted by UNESCO is a compelling example of what can be done to preserve, protect and promote culture and heritage internationally. While UNESCO is no stranger to political controversy — President Trump famously withdrew US membership in 2017 — for smaller countries, the additional protection, finance and diplomatic leverage that UNESCO World Heritage recognition provides is vitally important.

Running parallel to the Baku conference was the World Heritage Young Professionals Forum. Accompanied by local and international experts, these young leaders went on informative site visits that were followed by presentations and roundtable discussions, offering an opportunity to build stronger international bridges for future cooperation.

For what is heritage if not an inheritance for generations to come?

Tale Heydarov is a leading Azerbaijani businessman, passionate about sport, education and culture. He has helped to promote education and literacy in Azerbaijan, while increasing knowledge of the country’s history and culture abroad.

Fintechs vs. banks? Time to clear up the competition myth
Russian sanctions against Georgia: How dangerous are they for country’s economy?
Comment