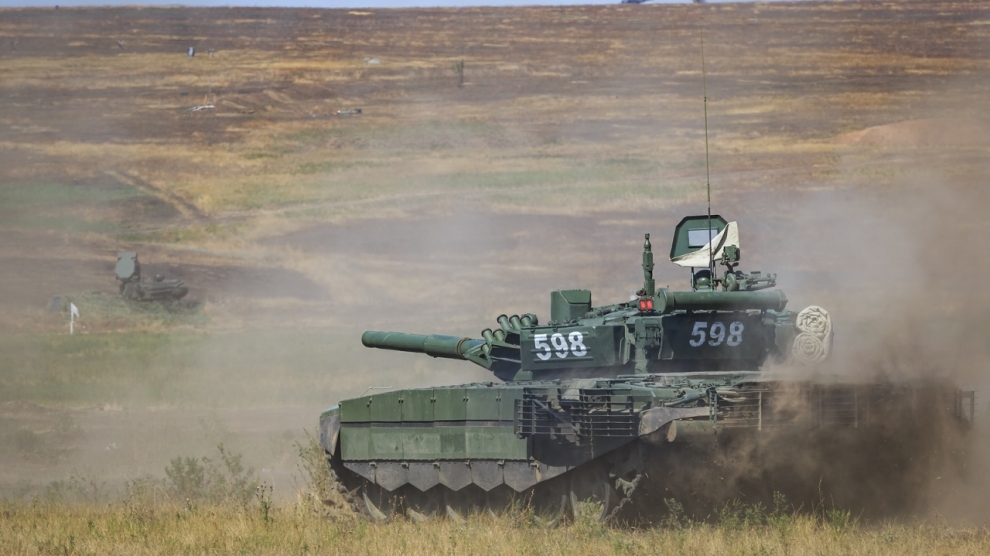 The strategic joint military exercise Zapad-2017 took place from September 14-20 at several training grounds in Russia and Belarus. According to official statements, the total number of troops participating in this military drill was 13,000. However, the real figures could well have been significantly higher. The official scenario of Zapad-2017 was very close to that of previous Belarusian-Russian military exercises, which took place in 2011 and 2013. Belarusian and Russian troops were preparing to repel aggressive actions by their western neighbours, aimed at destabilising the situation in Western Belarus.

Every time the Zapad military exercise takes place it attracts a great deal of media attention. Zapad-2017, however, provoked more anxiety among western officials, journalists and analysts than ever before.

Why? I would like to explain in five points.

1. Zapad-2017 was a part of a larger series of major Russian military exercises taking place in the second half of 2017.

The recent Zapad-2017 exercise should be perceived as an integral part of a large series of very intensive military drills taking place all over Russia. In other words, Zapad-2017 is not a stand-alone military event, but part of an ongoing large-scale drill campaign. In recent months, the Russian army carried out more than 10 important military exercises, including the drilling of strategic nuclear forces, fleet exercises, and ground force drills in the Central and Southern Military Districts. This unprecedented intensive training activity pursued the following goals:

– intimidation of NATO and Russia’s neighbours by a manifestation of the Russian military might;

– progress in political talks with the US and the EU (the Kremlin wants to make the West accept the status quo in Ukraine and withdraw anti-Russia sanctions, promising to stop the military blackmail in exchange);

– pre-election propaganda – in reaction to the aggravating socio-economic crisis in Russia, the Kremlin wants to boost popular feeling by displaying Russia’s military strength.

2. Zapad-2017 intends to prepare the Russian Army for a regional military conflict in Eastern Europe.

Despite the Kremlin’s official statements on the defensive character of Zapad-2017, this exercise had a rather offensive character. Russian troops trained for possible action in the Baltic Sea region. It seems that the Kremlin used Zapad-2017 to prepare Russian troops for a regional level military conflict, which may take place in Eastern Europe. This drill was intended to convey to NATO the following messages (which are mostly bluffs):

– the Russian army is capable of quickly occupying the Baltic states if a military conflict between NATO and Russia breaks out;

– the Russian military fully dominates the Baltic Sea region and it will introduce the so-called anti-access/area denial zone. It will make it impossible for NATO aviation and fleet to reach the Baltic States if the military situation in the region aggravates;

– the Kremlin has enough political will to use tactical nuclear weapons in a regional war;

– the recently established divisions of the Western Russia Military District are well trained and equipped.

– the Kremlin wants the West to believe that Russia has a very high military potential in Eastern Europe and is willing to protect Russian interests by all means.

3. Zapad-2017 was preceded and followed by a large-scale disinformation campaign.

It is very probable that the panic spread across the European media on the eve of Zapad-2017 was a result of a purposeful disinformation campaign designed by the Russian military. The intimidation is one of the most important goals of every large Russian military drill. Many misleading stories inserted in to the public discussion by ‘unknown’ sources were successfully spread by reputable media and high-level politicians. For instance, many media outlets announced that tens of thousands of Russian soldiers would be moved to Belarus (instead of the declared 3-4000), that the exercise will result in the military occupation of Belarus, and that a significant number of the Russian troops will stay in Belarus after the end of the exercise. None of these prophecies were fulfilled.

It can be concluded that, besides the traditional military activities, the Russian army was testing its capacity to wage an informational war.

4. The Kremlin tried to demonstrate that it retains strategic control over Belarus despite growing disagreement between Presidents Lukashenka and Putin.

One of the most important Kremlin goals during Zapad-2017 was to demonstrate its political and military control over Belarus. The Russian authorities use similar military exercises taking place in Armenia, Tajikistan or Kazakhstan to delineate its ‘sphere of influence.’

It is important to point out that the recent Zapad exercise was organised in a climate of a serious political disagreement between the Russian and the Belarusian authorities. For unknown reasons, Russian President Vladimir Putin and the Minister of Defense Sergei Shoigu did not come to Belarus to observe Zapad-2017 together with the Belarusian President Aleksander Lukashenko. This situation is unprecedented, as Russian top-level officials have always visited Belarus during the most important military exercises.

5. Belarusian participation in the Zapad exercise was primarily focused on logistics.

It seems that the main attention of the Russian military during that part of Zapad-2017 which took place on Belarusian soil was focused on logistics. The Russian army was checking its capacity to quickly deploy a significant number of troops in Belarus. The exercise on Belarusian territory was also used by the Kremlin to intimidate the Ukrainian leadership. Moscow sent a clear signal to Kyiv that Ukraine may potentially be attacked by Russian forces from the territory of Belarus.

Despite the rather aggressive character of Zapad-2017, the military capacity of Russia in Eastern Europe should not be overestimated. One of the key goals of this drill was to conceal numerous problems existing within the Russian army. Kremlin wanted to demonstrate its alleged military strength, a strength which is not supported by the current state of the Russian economy.

Aliaksandr Papko is a Belarusian political scientist and journalist.