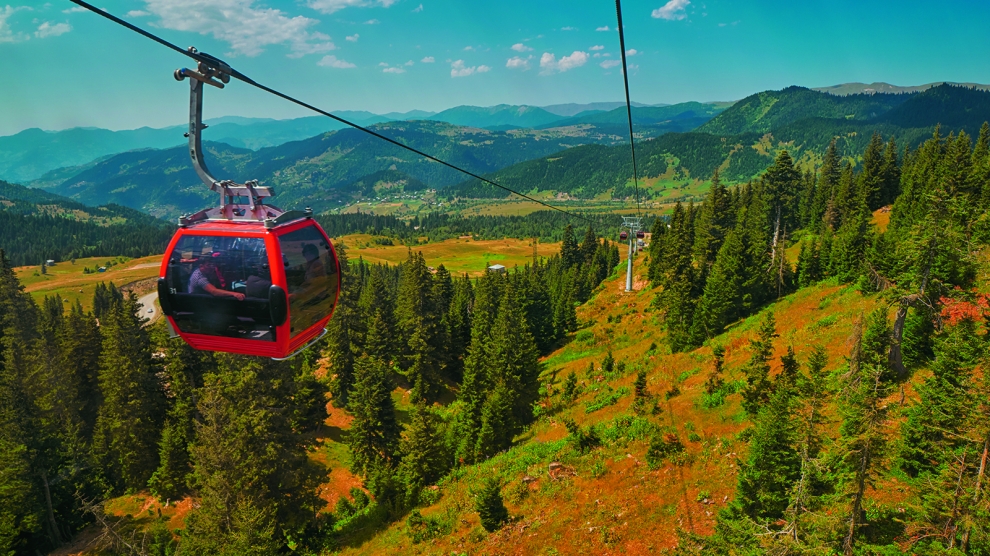 More than 8 million people will visit Georgia this year, making tourism one of the largest sectors of the economy. Making sure that as many Georgians as possible benefit from the tourism boom is crucial.

It was the high heels which first aroused suspicion. Most tour guides in my experience eschew them: they are not conducive to long hours of walking from cathedral to café, museum to monument, often over cobbles and up endless flights of stairs.

The large black Mercedes– complete with tinted windows – to which the young lady in the high heels led me confirmed what I had begun to suspect. This would be no walking tour of Tbilisi. We would be seeing the Georgian capital from the back of a car.

That was 10 years ago. A tour of Tbilisi had been arranged for me by the city council, which was proudly launching its new urban brand: The City That Loves You – a slogan which evolved over the years to become today’s City Full of Life. Truth is, there simply weren’t many visitors to Tbilisi – or to Georgia as a whole – a decade ago. And those who did venture this far were often business people with little time, who wanted just what I had been provided with: a whistle-stop tour of the capital complete with elegant companion.

Georgian tourism first took off in 2012, jumping from 2.8 million visitors to 4.4 million in the space of 12 months. But it was 2017 which really placed the country on the map: more than 7.5 million people visited Georgia, an increase of 18 per cent on 2016. The number of visitors from Western Europe increased by almost 30 per cent.

“Yes, Georgia is a relatively new travel destination for western European tourists,” says Rusudan Mamatsashvili, the impressive young deputy head of the Georgian National Tourism Association (GNTA). “We are focusing on this market more and more, and have seen considerable growth from several important countries, such as Germany, the Netherlands and France with overall numbers from western Europe increasing 28 per cent this year.”

An increase in the number of flights serving Georgia’s two main airports, at Tbilisi and Kutaisi, has helped. But whereas Tbilisi International has benefited from highly visible investment in recent years, Kutaisi retains a rather provincial feel. “It’s awful,” said one Italian visitor I spoke to in December 2017. “There is nothing to do. Nowhere to eat, nowhere to drink, and the shuttle buses to and from Tbilisi are small, filled with smoke and almost certainly highly dangerous.” Fortunately, a new terminal is planned to open in 2020, which will be served by direct trains from Tbilisi.

It is at Kutaisi that Wizz Air, emerging Europe’s largest airline, has based itself. The Hungarian company now serves 19 destinations from Kutaisi – capacity expanded by 77 per cent in 2017 – and plans to add more routes in 2018. From May it will fly to Barcelona, Paris, Prague and Rome. Flag carrier Georgian Airways – based in Tbilisi – will also be adding a number of routes this year, including Barcelona, Berlin, Brussels, Cologne and Paris. Altogether, Georgia’s three international airports – the third is on the Black Sea coast at Batumi – served 4.03 passengers in 2017, an increase of 43 per cent on the previous year.

News network CNN has hailed Tbilisi as “an almost overnight must-see destination, the city increasingly becoming one of the world’s most coveted hubs for fashion, arts and creativity.” But there is far more to Georgia than Tbilisi. In fact, those in the know insist that the best of Georgia is to be found outside the capital. “There’s Ushguli, a community of four villages located at the head of the Enguri gorge in Svaneti. Recognised as the Upper Svaneti UNESCO World Heritage Site, Ushguli is one of the highest continuously inhabited settlements in Europe,” says Rusudan Mamatsashvili “and don’t forget Tusheti – the most picturesque and mesmerising region of the country, tucked away at the foothills of the Caucasus Mountains.”

Ms Mamatsashvili is keen to underline the opportunities tourism can offer to many of these remote and rural communities in Georgia. “The country’s relatively small size and strong historical ties with agriculture mean that the development of rural, agro and eco-tourism is highly beneficial. Overall, I strongly believe that a number of regions in Georgia can become highly competitive offering exactly this kind of holiday.”

Private enterprise has not been slow to seize upon these opportunities. Nino Kvernadze is project manager at the environmentally-conscious Adjara Group, which currently operates four hotels across Georgia, including one at Stepantsminda, about a dozen kilometres from the Russian border and the Kazbegi National Park.

“Our main focus isn’t the quantity of tourists but the quality of each person’s stay. We want people to visit Georgia for our hospitality, culture, traditions, history, various beautiful sites and of course food and wine,” said Ms Kvernadze, who has worked hard to cultivate productive relationships with local farmers.

“We are very proud of our partnership with the Georgian Farmers’ Association,” she tells Emerging Europe. “We don’t just strive to deliver the highest quality of food and service to our guests, but we also work rigorously behind the scenes to ensure our food and wine is grown and produced by local farmers. By working alongside the Farmers’ Association, we provide a consistent demand for locally grown produce. We believe the most important aspect of farming is supporting it. We want to aid continuous growth in quantity, quality and consistency. We encourage our chefs to discover local produce and to incorporate it into our restaurants’ menus. Within our restaurants we look to recognise individual farmers who contribute to the various dishes served, by providing quality produce. Cuisine is a high driver in modern tourism and by improving the quality of food and wine served, it will benefit not only our business, but the local community as well. By supporting farming, we hope to encourage other establishments within the Georgian hospitality industry to join us and help develop local agriculture.”

Gudauri is Georgia’s leading ski resort (indeed, we named it Emerging Europe’s best ski resort in December 2017). Georgians have been skiing here for decades, but, with a few exceptions – it has only recently fallen onto the radar of international skiers, not least as it offers one of Europe’s cheapest lift passes: just over 50 US dollars for a week on the slopes.

One of those exceptions is Marc Openshaw, a former British ski instructor who has skied in more than 30 countries across the world. “It was in either 1988 or 1989 that I first heard of Gudauri,” he tells Emerging Europe. “I used to avidly wait for the release of the new season’s ski holiday brochures, and one year in the UK the big story was that skiing was now possible in the Soviet Union. The resort was Gudauri – I think they had just built the first gondola lift. It was exciting, so I went, and remember heli-skiing out of a specially-chartered Red Army helicopter. Unfortunately, few others ventured that far, and by the next year Gudauri had gone from the brochures, as quickly as it had appeared.”

The resort has developed since then, but according to Piotrek Rząca, a Polish investor who runs a hostel in the resort, more needs to be done.

“It’s a great resort,” he says, “but there are some problems. There is little common infrastructure, no ski bus, and maintenance of the slopes is not the best. There is also very little apres ski. But the resort is still developing, and next year new lifts and another 20 kilometres of pistes will open.” It is to be hoped that the new lifts will ensure there is no repetition of a highly-publicised malfunction at Gudauri in March 2018, which saw a chairlift shift into reverse at high-speed. Miraculously, nobody was seriously injured.

As a foreigner who invested in Georgian tourism – he also runs a hostel in Tbilisi and publishes maps to the city – Mr Rząca has witnessed great changes since arriving in 2011.

“What brought me here initially was curiosity, as well as freedom and flexibility,” he says. “I soon discovered that Georgia is a very easy place to do business.”

As for the increase in visitor numbers, Mr Rząca says it is “highly visible.”

“Georgia is diverse by nature, friendly to tourists and safe. There is a lot to see. Sometimes, however, I do get the impression that Georgia isn’t fully ready for so many tourists.”

Ready or not, what Georgia can guarantee is a warm welcome. “I have yet to meet a person who didn’t enjoy their trip to Georgia,” says Nino Kvernadze. “Visitors can’t get enough of the country and want to come back for more. Georgians are very hospitable people so we make sure our guests have the best time and get to fully experience our country. There are still so many people that haven’t had the pleasure of discovering Georgia, but in some way that just makes it an even more exotic place to travel.”