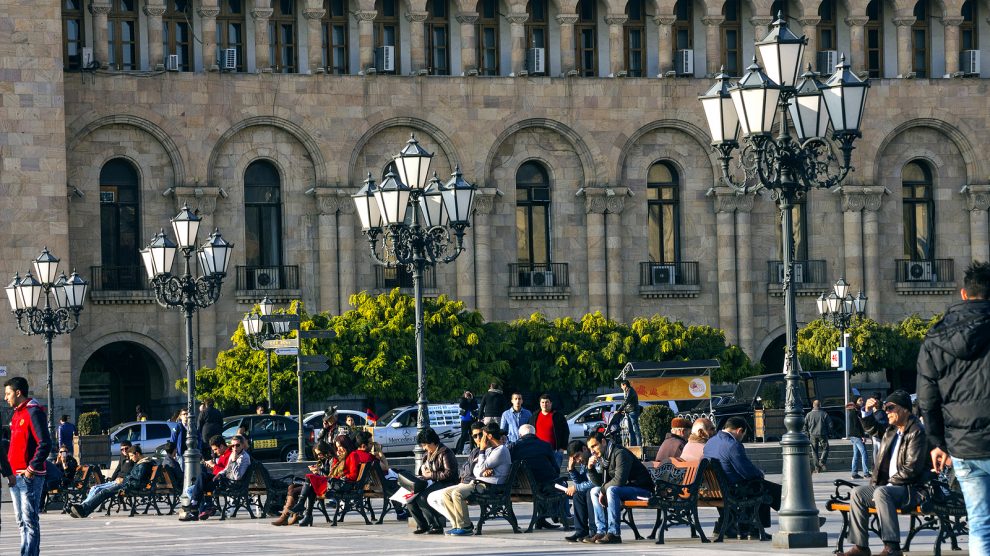 The potential of Armenia’s diaspora offers the country a unique chance to become a major tech power, but only if the political will exists to make the most of it.

After months of intermittent border incidents, Yerevan finds itself in an unenviable position: In March, the International Monetary Fund (IMF) drastically cut its forecast of Armenia’s economic growth for 2022, which it now projects at 1.5 per cent, rather than 5.3 per cent as previously expected.

The diminishing outlook comes in the wake of Russia’s war on Ukraine, which has fundamentally altered global economic parameters for the worse – at a time when Armenia is still struggling to recover from the impacts of the Covid-19 pandemic.

With trouble brewing at the Azerbaijani border, it’s evident that the current government can hardly afford more destabilisation if the rather optimistic yet adamantly defended goal of seven per cent economic growth this year is to be achieved.

And yet the question remains if the government has the vision, or the means, to ramp growth up to such levels: Armenia’s economy requires not merely a revival, but a transformational reset that is only possible if the country’s vast diaspora is included in the process.

“We need more business developments with members of the diaspora who own tech businesses overseas – promoting joint ventures will be a good opportunity for the empowerment of local start-ups, and most important, we need diaspora tech talents to support the digitalisation and automation of government-related processes as well as to apply high-tech solutions in traditional industries,” Amalya Yeghoyan, executive director of Gyumri IT Centre, tells Emerging Europe.

The need for economic transformation

The Covid-19 pandemic caused Armenia’s real GDP to contract by almost eight per cent along with a concomitant increase in unemployment. A recovery is underway, though it’s arduous and slow, and hampered by “long-standing structural issues”, according to the World Bank.

These include an economic structure centred on export of agricultural products and mineral resources. The country is traditionally highly vulnerable to fluctuations in Russia’s business cycle as well, with the fallout from the Ukraine war now threatening to wipe out most of the progress made since 2021.

What Armenia does have are the necessary resources to deeply reform its economic structure in a way that would result in the entire country becoming more modern, resilient and relevant in a tech-driven globalised world.

Its potential for an economy based on sustainability, tech solutions and innovation is well-recognised by international institutions. While Emerging Europe ranked Armenia 18th of 23 countries in the region in its latest Future of IT report, there are reasons for optimism.

The start-up scene, with some input from the diaspora, is thriving. According to some estimates, there are over 500 start-ups in the country — an impressive feat in a country of under three million people.

Indeed, the World Bank, in a seminal 2020 report, identified “biotech solutions, cleantech and seismic engineering” as some of many examples of vertical applications in which Armenian software and hardware developers could find a global niche.

Armenia is already extraordinarily well-positioned to succeed in establishing a new economic model, especially so when Yerevan’s arguably greatest resource is taken into consideration: its large diaspora. With almost twice as many Armenians living abroad than in Armenia itself, the diaspora is important not only as a source of personal remittances, but also as an intermediary for investments, ideas, skills, and networks important for broad experimentation with new ideas. In other words, they are much needed amplifiers for innovation.

“The diaspora is both a source of inspiration, intellectual capacity, and funding. Entities such as Service Titan from Los Angeles and mega entrepreneurs such as Noubar Afeyan, the co-founder of Moderna out of Boston provide guidance, jobs through their local affiliates in Armenia, and others in VC space along with individual angels respond to the local needs with funding and network,” Armen Orujyan, founding CEO at the Foundation for Armenian Science and Technology tells Emerging Europe.

Levon Ohanesyan, CEO of Enterprise Armenia, agrees. “The diaspora plays a key role in shaping Armenia’s vividly vibrant and rapidly-growing IT ecosystem,” he tells us.

“Innovative educational initiatives, technology transfer, providing linkages with and securing the presence of the global tech giants in Armenia and pushing locally-grown start-ups global transform Armenia into a technological hub of the region. We are witnessing the momentum of Armenian start-ups emerging on the map of foreign venture capital. This would be impossible without the strong and talented diaspora.”

There are question marks, however, over how much Pashinyan wants to get the diaspora meaningfully involved.

Other Armenian politicians have been much more vocal in their support of diaspora involvement, such as the country’s former President Armen Sarkissian, president from 2018 to 2022, and prime minister from 1996 to 1997. He was also a professor at Cambridge University and Armenia’s ambassador to the United Kingdom, and has worked as a business consultant as well, for companies such as BP, Alcatel, and Bank of America Merrill Lynch.

This international exposure has undoubtedly contributed to Sarkissian recognising early on the diaspora’s role in turning the country into “a hub of new ideas and technologies”, since it would allow Armenians “to do business in many places.”

Importantly, this is a view shared among many of the diaspora’s most prominent and influential members. A full-page ad in the New York Times in 2016 paid for by 23 important diaspora figures made this explicit, when they called on their countrymen to make “a long-term commitment toward collectively advancing” Armenia.

More recently, other prominent expats from the business community have spoken out by emphasising how the entrepreneurial mindset of the diaspora could positively affect Armenia.

“With one million Armenians in the US, Armenia’s IT landscape is living the momentum with these people becoming Armenia’s sales managers, lobbyists and influencers in Silicon Valley. And IT giants like NVIDIA, Service Titan, DISQO opening their offices in Armenia,” Hovsep Patvakanyan, CEO of Invest in Armenia CJSC tells Emerging Europe.

Embracing this community further will offer its members an opportunity to act – a crucial pre-requisite. The country’s constitution heavily restricts who can serve in public positions, making it only possible for individuals who have held citizenship of Armenia and have permanently resided there for the preceding four years. This is a serious barrier crippling the diaspora’s positive potential. During his presidency, Sarkissian called for a change in the Armenian constitution to embrace the diaspora. This approach was apparently not shared by the government, which some observers have claimed to have played a role in Sarkissian’s decision to resign from the presidency in early 2022.

Removing constitutional barriers would go a long way in preventing the rift between the transnational community and the homeland from widening, a major threat to the sense of common belonging within the diaspora. This is also important in light of the recent Armenia-Azerbaijan meeting, in the run-up of which Armenian rhetoric indicated intent to let Azerbaijan gain control over ethnic Armenian areas in Nagorno-Karabakh, clashing with the diaspora’s past support for the region’s independence.

“The Armenian diaspora that lives abroad creates a ripple effect; one conversation with the right VC, one lunch with a potential client opens doors for Armenian tech companies to expand their horizons. Let’s not forget that the new world pioneers of the Armenian tech ecosystem that started the ‘movement’ were Armenian diaspora representatives,” Armen A. Avakian, chief business development officer at Hexact, Inc tells Emerging Europe.

The benefits for Yerevan if it can further harness the power of the diaspora are endless. Only then can the “brain grain” lead to innovation incubators on Armenian soil to kick off the much-needed transformation.