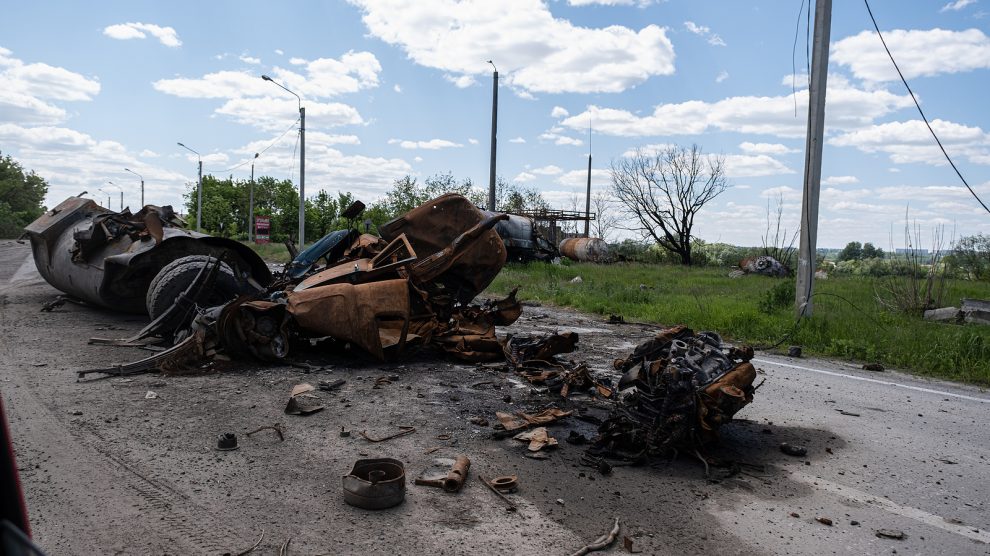 Russia’s war on Ukraine has reached a strategic deadlock, a senior adviser to President Volodymyr Zelensky said this week. “Russian forces have achieved only minimal advances, and in some cases we have advanced, since last month,” the adviser, Oleksiy Arestovych, said.

Four people were killed and 20 others were wounded in a pre-dawn shelling of a residential area in the eastern Ukrainian city of Kharkiv on Thursday, Oleh Synehubov, the regional governor said. It was the heaviest shelling on Kharkiv for several weeks. In the southern Slobidskyi district, “one of the missiles hit a four-story dormitory. The building is partially destroyed. Preliminarily, two people died, 18 got injured, including two children,” Synehubov said in a statement on social media.

The heavy attrition of Russian battle tanks in Ukraine is highly likely partially due to Russia’s failure to fit and properly employ adequate explosive reactive armour (ERA), according to a British intelligence report. Used correctly, ERA degrades the effectiveness of incoming projectiles before they hit the tank, the UK ministry of defence said on Thursday. “This suggests that Russian forces have not rectified a culture of poor ERA use, which dates back to the first Chechen war in 1994,” the report added.

The main bridge connecting Crimea to the Russian mainland must be “dismantled”, the Ukrainian presidential aide Mykhaylo Podolyak said this week. The 19 kilometre Kerch Strait Bridge is Moscow’s key military and civilian land corridor to the occupied peninsula. “The bridge is an illegal object,” Podolyak said. “it must therefore be dismantled. It is not important how – voluntary or not.”

Russia reportedly closed the Kerch Strait Bridge to civilian traffic on Wednesday, partly to prevent a further exodus of Russians from Crimea. Tens of thousands of Russians have left the peninsula over the past week, following a series of successful Ukrainian attacks on Russian bases and infrastructure.

Ukraine must “prepare for all scenarios” at the Russian-occupied Zaporizhzhia nuclear plant, its interior minister, Denys Monastyrsky warned on Thursday. Ukraine’s emergency services this week took part in a disaster response drill amid fears of another Chernobyl-like disaster at the plant. “Nobody could have predicted that Russian troops would be firing on nuclear reactors with tanks. It is incredible,” said Monastyrsky, who added, “as long as the plant is controlled by Russia there are major risks”.

Russia’s defence ministry meanwhile has continued to insist that its forces do not have heavy weapons deployed at Zaporizhzhia, accusing Kyiv of preparing a “provocation” at the station. “Russian troops have no heavy weapons either on the territory of the station or in areas around it. There are only guard units,” the ministry said in a statement on Wednesday.

Ukraine’s start-up scene continues to show remarkable resilience despite the ongoing Russian invasion of the country, although almost half now admit to having real concerns about their ability to continue operations at their current level without revenue, new investment, or financial support. In a major new survey carried out by Emerging Europe and Tech Emerging Europe Advocates in partnership with the Ukrainian Start-up Fund, the Ministry of Digital Transformation of Ukraine, TechUkraine, Global Tech Advocates and TA Ventures, more than 48 per cent of start-ups said that revenue or new investment would be needed over the next three months in order to allow them to continue operating at current levels. An additional third of start-ups said that they would face problems within six months.

Armenia is mourning the victims of the Surmalu market explosion in Yerevan that claimed at least 16 lives on Sunday, as rescue works continue to search for missing people. Armenia’s government declared August 17 and 18 days of national mourning for the victims. The cause of the blast is still being investigated. Deputy Emergency Situations Minister Artush Grigorian said on Wednesday that workers were focusing all their efforts on finding any survivors under the debris.

NATO will increase its peacekeeping force in Kosovo if there is an escalation of tensions with neighbouring Serbia, the alliance’s chief said on Wednesday, on the eve of EU-facilitated talks between the estranged western Balkan neighbours. “We have now a significant mission, a military presence in Kosovo close to 4,000 troops,” Jens Stoltenberg told a news conference after talks with Serbian President Aleksandar Vučić in Brussels, who stood alongside him.

Around a thousand Hungarians protested for the second time in less than a week against a loosening of logging regulations by Prime Minister Viktor Orbán’s government amid increased demand for firewood due to surging gas and electricity prices. Nationalist Orbán’s cabinet, citing the effects of the war in neighbouring Ukraine, loosened regulations on logging earlier this month, which activists and opposition parties say could accelerate deforestation and harm the environment.

Estonia has repelled “the most extensive cyber attacks since 2007”, it said on Thursday, shortly after removing Soviet monuments in a region with an ethnic Russian majority. Russian hacker group Killnet claimed responsibility for the attack, stating on its Telegram account on Wednesday it had blocked access to more than 200 state and private Estonian institutions, such as an online citizen identification system. However, an Estonian government official said on Thursday the impact of the attack was limited.

Moldova’s pro-Western President Maia Sandu said on Wednesday that she does not understand why Russia imposed a new embargo on Moldovan fruit, as her country’s goods meet EU quality standards that are higher than Russian standards. Russia announced last week that it would block products from certain locations in Moldova, not including the Russian-backed breakaway region of Transnistria, on the pretext that they are contaminated by pests and plant diseases.

Polish firefighters have recovered 100 tonnes of dead fish from the Oder River running through Germany and Poland, deepening concerns of an environmental disaster for which no cause has yet been identified. “We’d never had an operation of this scope on a river before,” said Monika Nowakowska-Drynda from the national firefighter press office on Tuesday. She confirmed that around 100 tonnes of dead fish had been recovered since Friday. More than 500 firefighters have been recovering the dead fish in Poland with the help of dams, boats, quad bikes and even a drone.

Amid a sharp rise in exports to Russia, Armenia is working to establish a new Black Sea ferry service from Georgia to Russia, officials have said. While the inspiration for the new service seems to have been long-standing problems with bottlenecks at the Georgia-Russia border, it has taken on new significance and scrutiny in light of the war in Ukraine and the resulting international sanctions against Russia. Armenia’s Economy Ministry said the service, from Georgia’s port of Poti to Kavkaz in Russia, was supposed to start on June 15 but now should start operating by the end of August.

The European Bank for Reconstruction and Development (EBRD) will lend 43 million euros for the construction of two wind farms in Croatia to boost electricity generation from renewables by more than 10 per cent, the EBRD said on Tuesday. The wind farms, due to be built in the southwestern Zadar region, will have a total grid capacity of 111 megawatts (MW), enough to power 85,000 households and help avoid more than 78,000 tonnes of CO2 emissions annually, the bank said.

The father of a Polish girl born as a result of in vitro fertilisation (IVF) says he will sue the education minister and the author of a textbook for a new school subject. The book compares IVF to “human breeding” and asks rhetorically “who will love such children?” The launch of the textbook, to be used in Polish high schools from September, and the new subject itself, History and the Present (Historia i Teraźniejszość), have drawn criticism from various politicians and activists, with the opposition saying the new class will be used by the ruling nationalist Law and Justice (PiS) party to promote its conservative agenda.

Seventeen-year-old David Popovici of Romania became the youngest swimmer to break the world record in the men’s 100-metre freestyle last Saturday, beating the mark set more than 13 years ago in the same pool. Popovici touched in 46.86 seconds at the European championships to top the time of 46.91 set by Brazil’s César Cielo at the 2009 world championships, which also were held at Rome’s historic Foro Italico.